Seattle University is still in possession of one the most contentious pieces of American art in recent months—but it’s not on display. After contemporary American artist Chuck Close came under fire for sexual misconduct allegations in December 2017, the university made the decision to rotate his piece, “Self-Portrait 2000,” from its location on the second floor of the Lemieux Library to storage in January 2018.

This added Seattle U to a running list of museums, galleries, archives, and institutions that were faced with the question of what to do with works of art created by artists accused of sexual misconduct. Some museums, such as the National Gallery, cancelled Close’s exhibitions and others hung plaques with information of these allegations. 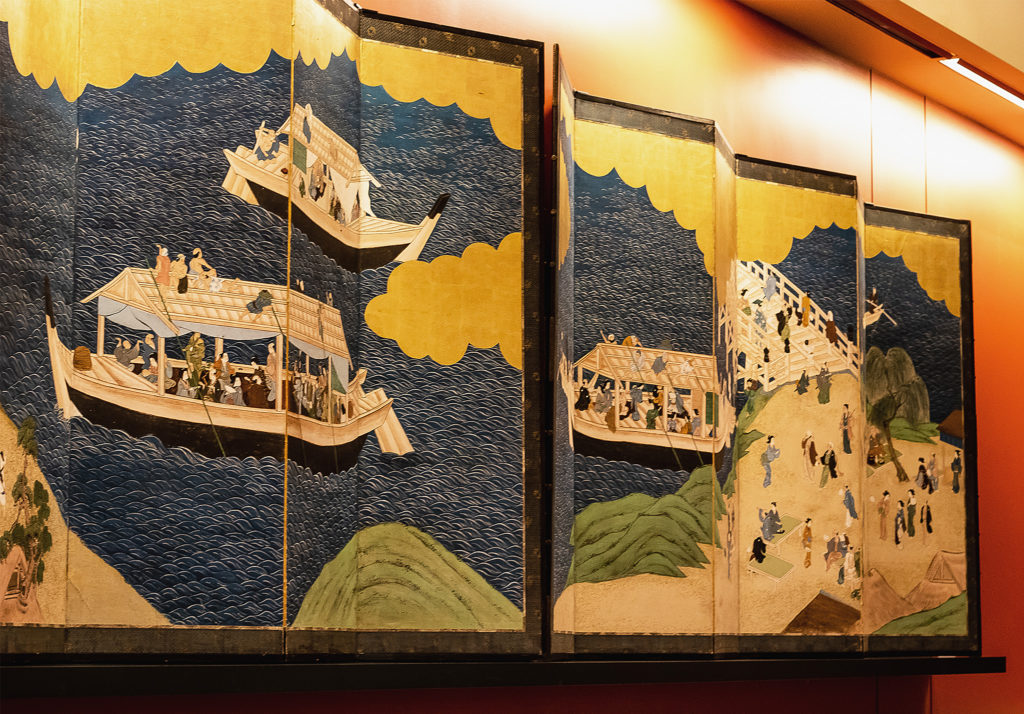 Titled Common People Having a Picnic, this painting replaces the previous one that hung by the main staircase in the library.

Dean of the Lemieux Library and McGoldrick Learning Commons Sarah Watstein said the decision to remove the self-portrait was made with respect to the location of the piece itself, as well as the concerns and discomforts of the users of the library.

“Right around the time of the 2017 winter holiday break, based on concerns and sensitivities of patrons [of the library], the library staff, in consultation with the provost, made the decision to rotate the painting,” Watstein said. “So we come into January 2018, and the painting was rotated to secure storage.”

Close’s “Self-Portrait 2000” was a gift to the university, and was widely regarded as one of Seattle U’s most well renowned pieces in its collection of over 300 pieces, valued at $35,000 before the allegations. After removing the Close print, the university hung “Untitled” by contemporary American artist Linda Stojak in its place.

The university remained quiet about the self-portrait until August 2018, when Seattle’s alt-weekly newspaper, The Stranger, published a story titled “Seattle University to Rehang Chuck Close, an Artist Accused of Sexual Harassment,” only adding to the confusion of the fate of the painting.

University Curator Father Thomas Lucas, S.J., said that while the quote the newspaper published was accurate, his original statement did not accurately reflect the state of the library’s decision, which was that they were revisiting the question of rehanging the self-portrait, pending meetings with key campus stakeholders.

These meetings were held after some of the library staff began to entertain the idea of rehanging the piece. Lucas said that after reaching out to “appropriate departments,” including the Office of the Provost and new Provost Shane Martin, they decided that the timing was not right to continue discussing the matter, and the painting has since remained in secure storage.

“We were thinking seriously about it, but as we discussed this with people across campus, it became clear that it was not the right moment to do this, and I don’t know if there will be a right moment to do it in the future,” Lucas said. “That is all going to depend on how the circumstances evolve, or don’t evolve. So that’s where we are, those conversations were held and the consensus that arose was that this would not be a fruitful thing to do.”

An untitled painting by Linda Stojak that replaced the previous painting by an artist accused of sexual assault.

Despite multiple requests, Provost Shane Martin did not respond to comment on this article.

Watstein added that if Seattle U ever decides to rehang the self- portrait, the library will most likely add some sort of wall tag, libguide, or QR code that leads to a website with information. These additions have been implemented at other museums and galleries across the United States.

“There would be a very careful study of what other people have done and what are the best practices that are being observed in other places,” Lucas said.

Watstein also emphasized that Seattle U has no plans to deacquisition the self-portrait, citing reasons such as art, art history, or women and gender studies classes that could want to look at the piece.

Associate Professor of Art History Naomi Hume said that regardless of what Seattle U chooses to do, she hopes that the university will use it as an opportunity to discuss the #MeToo movement in art.

“This can help people think about their relationship with art, and to use art as an analogy for the power dynamics that go on in real life, so that we can discuss them,” Hume said. “How we respond can contribute to changing our own society in response to this important moment when women are actually being heard.”

“Self-Portrait 2000” will remain in storage for the indefinite future. Currently in its place is “Common People Having a Picnic,” a 24-foot- long piece by an 18th century anonymous Japanese artist, donated to the university by the Weyerhaeuser Foundation.