“You Will Be Found” Crying At Dear Evan Hansen 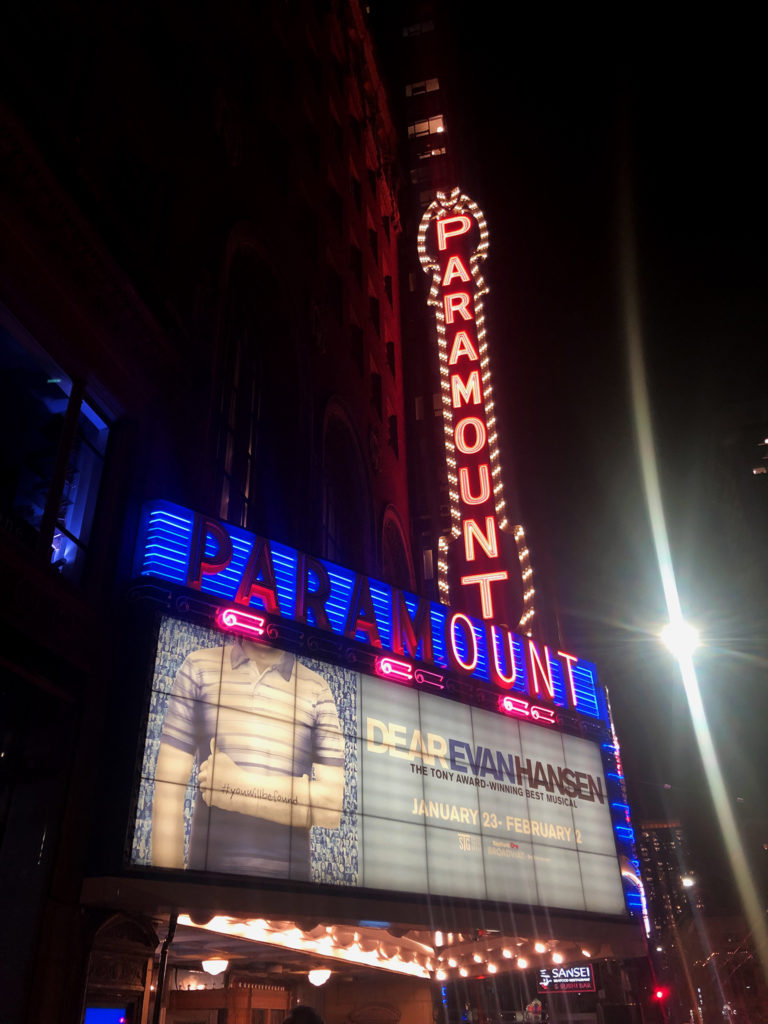 The view of the Paramount Theater before the Dear Evan Hansen Play.

Last week, the touring company of “Dear Evan Hansen” made its week-long stop in Seattle for their national tour, and I got the amazing chance to catch a show at the Paramount Theatre.

I have been a big fan of Broadway musicals for a long time, but have never seen one live before. Most of my enthusiasm stems from listening to original cast recordings of musicals— such as “Spring Awakening,” “Hamilton,” and “Rent”—on YouTube or Spotify and following the storylines solely through the musical numbers. I tried to win the Hamilton lottery in New York a few years ago, but unfortunately did not win tickets.

Regardless, good things come to those who wait, and when I found out my friend was able to snag two tickets for the Seattle leg of the tour this year, I lye in wait for the night I would finally get a chance to see a musical as wonderful as “Dear Evan Hansen.”

“Dear Evan Hansen” is the Tony award-winning Broadway musical about a socially awkward 17-year old named Evan Hansen who finds himself tangled up in a lie after an outcast classmate, Connor Murphy, commits suicide. Evan pretends to have been best friends with Connor in an effort to bring comfort and closure to the Murphy family during this time of grief. He eventually finds himself spiraling too far into the deceit when he creates an online campaign with his friends to honor Connor’s memory, garnering attention from thousands of people around the country.

The musical touches on the topics of mental illness, suicidal thoughts, family struggles, and the power of social media.

The first time I listened to the cast recording, I immediately fell in love with Evan’s character. Originally played by actor Ben Platt, Evan is a profound character that most people felt they could relate to, with his cheeky one-liners and adorable awkwardness. I also fell in love with the conversations the musical sparked surrounding mental health, especially in teenagers, and the false validity social media can bring when trying to garner attention for a topic as sensitive as suicide.

I arrived at The Paramount filled with the same excitement as a kid going to Disneyland for the first time. Our seats were towards the back of the floor, but I still got a great view of the stage, with a setup of banners with projections of Facebook, Instagram, and Twitter feeds constantly being updated, and Evan’s bedroom setup in the center.

As soon as I heard the first notes of the opening number, “Anybody Have a Map?” I was already jumping out of my seat and singing along. I was especially animated singing along to my favorite numbers: “Waving Through A Window,” “Sincerely, Me,” and “Requiem.”

I find the most emotionally-driven parts of this musical lie with its depiction of the differences between the Hansen and Murphy families, and how both Evan and Connor struggle to feel loved and seen in their own homes. Evan’s mother is a single parent working a full-time job as a nurse and attends night classes. She is always trying to push Evan into putting himself out there, but never fully understands how he feels. Connor is completely disconnected from his entire family, painted as a monster by his sister and father, and wants nothing to do with them.

As Evan goes further in his attempt to convince the Murphys that he was best friends with Connor, he finds solace in a more whole concept of family, as they make him dinner and allow him to stay over most nights, and falls in love with Connor’s younger sister, Zoe.

Once the truth explodes in Evan’s face, he admits to his mother that he tried to commit suicide earlier that year, because he had always felt so alone after his father left them. Despite the conflicts they had with each other earlier in the story, Evan and his mother share a beautiful and vulnerable moment on stage at the end as they reconcile with each other, and promise to really be there for each other from now on. By this part of the show, everyone in the audience was sniffling, and I was absolutely bawling.

“Dear Evan Hansen” was both heart-breaking and heart-warming, with a comical script and fun musical numbers, and as my first live Broadway show experience, an experience I will never forget.

Frances may be reached at
[email protected]