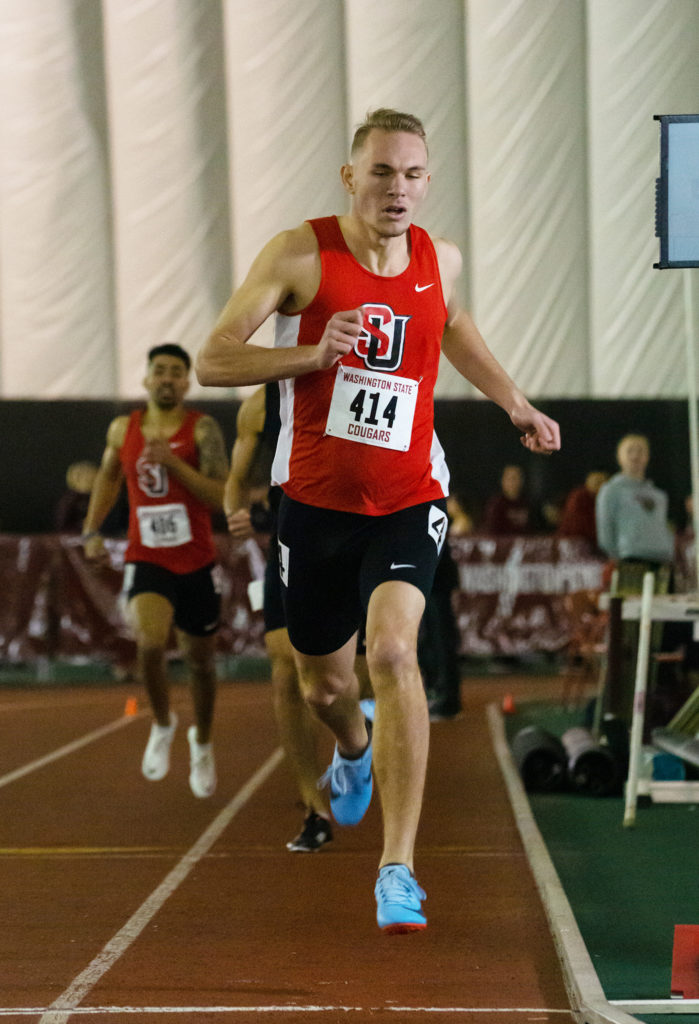 Lucas Milne runs through the finish line as he completes a long distance race at the University of Washington Track.

Basketball
Following a two-game road trip, the Redhawks came back and lost at home to California Baptist
University (CBU).

During the first half, Seattle University held a strong lead due to Anand Hundal and Terrel Brown’s three triples in the first five minutes of the game. Just before halftime, CBU surged back and the Redhawks lead was cut to 35-33. The second half proved difficult for the Redhawks as CBU stormed back, barely missing, to take the win.

Brown scored a game-high of 24 points for Seattle U, while Mattia Da Campo played a season-high of 38 minutes. Da Campo finished with a 13-point, 13-rebound double-double, the first of his career. Myles Carter also contributed 12 points.
Track and Field
Track and Field competed in a two day meet at Washington State University. Senior, Ben Monk, competed in the mile, earning a personal best and fifth place with a time of 4:26.00.

The Redhawks headed home Saturday night with some great wins under their belt; preparing them for their 2019 Western Athletic Conference (WAC) Championship Meet in Nampa, Idaho at the end of this month.
Tennis
Tennis took on Portland State University last Sunday afternoon, losing 6-1. The Redhawks are now 0-3 this season.

Juniors Trenton Nield and Arshak Ghazaryan both were able to make it through three sets, but ultimately lost the match to Portland State. In the double’s matchups, Seattle U had closer sets, but could not pull out the victory in the end.

The Redhawks will face Puget Sound University Feb. 8.
Swimming
Seattle U Redhawks celebrated Senior Day during their last regular season meet. Seniors Austin Barnard, Mitchell Crossen, and Ian Keane were all recognized for their performances and contributions to the team.

Junior Greg Raper set a new pool record at the Redhawk Center on Saturday; clocking in with a 20.34 second 50-yard freestyle time.

Even with Raper’s new pool record, the Redhawks took a loss to Simon Fraser, with a score of 124-137.

Sophomore Isaac Parker finished close behind Raper in the 50 freestyle with a time of 20.92 seconds, and Senior Ian Keane took third. Ryan Shaw, Neton, Raper, and Parker competed together in the 200-yard medley relay with a combined win of 1:33.08, winning gold.

The Redhawks will head to the 2019 WAC Championships, held in Houston, Texas from Feb. 27—Mar. 2.