End Of A Saga: How To Train Your Dragon 3 Soars 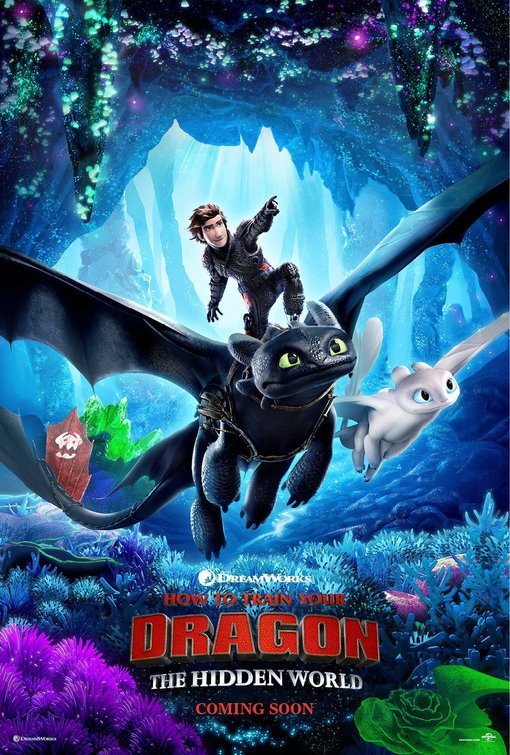 “How to Train Your Dragon: The Hidden World” is the end of the animated Dreamworks trilogy that began nine years ago. A few years after the events of the second installment, Hiccup, voiced by Jay Baruchel, has been rescuing dragons along with his ever-present dragon, the Night Fury Toothless.

Their dragon training has been so successful that their home island of Berk has become almost overcrowded with dragons, making them a target for the dragon hunter and Night Fury killer Grimel (F. Murray Abraham).

Wanting to save Toothless and all the other dragons, Hiccup comes up with a plan to find the “Hidden World”, where it’s said that a whole host of dragons live, in order for the people of Berk and their dragons to be safe from Grimel.

On their travels, they run into a female Night Fury, dubbed “Light Fury” by Hiccup’s girlfriend Astrid, voiced by America Ferrera, who immediately captures the attention of Toothless as he becomes smitten with her. All the while, Grimel pursues them relentlessly.

Some believe that animated movie sequels are not the same quality as the original. Thankfully, that is not the case here. Director Dean DeBlois does an excellent job of adding new material to keep this installment fresh while carefully retreading many of the old themes so many viewers would fall in love with in the first two installments.

DeBlois also uses more mature themes, like navigating adulthood, in his finale of the trilogy for the older viewers and parents as well.

With every installment, the animation has just gotten better and better. The flying sequences are truly breathtaking and do a tremendous job of almost making you fly yourself. The scenery is almost photo realistic at times too. The entire graphics and animation department deserve a huge round of applause.

The score as well is fantastic. Like DeBlois, composer John Powell does a phenomenal job of blending new tracks of the score with old themes many will be familiar with. Much of the voice cast from the previous two films return and still are perfect in their roles.

This isn’t all just visual splendor though. The plot is near, if not on, the same level as the visuals. This story is very much a story of Hiccup and Toothless, as it should be, given that this is the final installment and those are the two characters who have driven the trilogy. It can, at times, push some of the other characters into the background. However, I would much rather have that than take run time away from where the strongest relationship of all three films lies. Toothless is as adorable as ever and makes me wish I had my own dragon as a pet.

His interactions with Hiccup are a joy to watch and the added aspect of the Light Fury develop him further. Hiccup trying to play wingman for his dragon while he attempts some sort of mating dance for the Light Fury was such a highlight. As I said though, it’s not all about Toothless. Hiccup’s story completes his journey as character in such a satisfying way. Taking over as the chief from his late father Stoick (Gerard Butler), Hiccup faces many challenges as the one his people look to. Like anyone, he faces many doubts about the decisions he makes in order to keep his people safe. And when he doubts himself, those around him, like his mother Valka (Cate Blanchett) and Astrid, are there to catch him when he falls.

Being a kids animated film, there certainly are jokes. More often than not, the jokes do land, mostly from Hiccup’s group, but there were a few that I’m sure didn’t hit me as the writers would have liked.

More importantly though, does the ending stick the landing? This is even more important considering it’s the finale of a beloved trilogy, and what I was most worried about. Again, I’m glad to say I think it does. Packing copious amounts of emotion, the trilogy closes out with a resounding roar, giving everyone involved a completeness in the end of their overall arc. When this comes out worldwide on Feb. 22, I can imagine many—not just kids—dragging their parents, flocking to the theatre. As sad as I was that “How to Train Your Dragon” has ended its run, I couldn’t have felt more satisfied and happy that a series I grew up with gave me one last feeling of joy. And I still want my pet dragon.