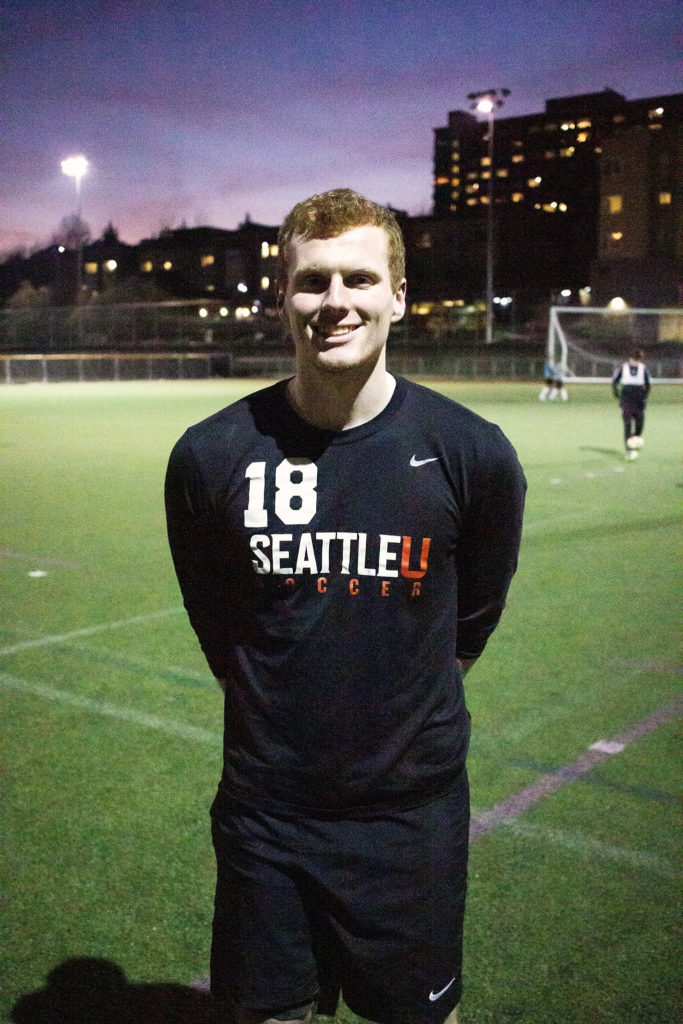 Transfer students face a unique set of challenges when arriving at their new university. New city, new classes, new professors, new friends and for some, a new team.

Zach Nelson transferred to Seattle University this winter and will join the Men’s Soccer team next season, his junior year.

Nelson transferred from Xavier University in Cincinnati, Ohio though he is originally from West Linn, Oregon where he grew up playing soccer for the Portland Timbers MLS Academy Team.

Before coming to Seattle U, Nelson was ranked in the top-20 players in the Northwest Region by Top Drawer Soccer. During his time as a goalkeeper at Xavier, Nelson was a crucial player.

Despite suffering an injury that kept him out for seven matches, Nelson logged a team-high 1,229 minutes in his first season.

Although Nelson was having a successful soccer career at Xavier, he wanted to return to the West Coast. He visited Seattle U and immediately took a liking to the players and coaching staff of the soccer team.

Nelson, a criminal justice major, eventually made his decision to transfer for academic reasons. Seattle U’s criminal justice program is ranked in the top 50 in the United States, something that sold Nelson on the university.

Finding Seattle U in the first place was not an easy process for Nelson. At first, he was unsure of how to reach out to potential new coaches and find schools with programs that were a good fit for him.

“I didn’t know about the portal at first, I thought I’d just be tossed out there and have to reach out to new schools,” Nelson said.

The portal refers to the Transfer Portal, a system where athletes can be contacted by other schools and teams if they so wish, which is huge help for transfer athletes unsure of how to build relationships with new coaches.

An enormous stress was lifted off Nelson’s shoulders when he was introduced to the system and he advises other athletes looking to transfer to join. Nelson also stressed the importance of keeping all relationships with past peers and coaching staff.

“They can be great assets in the future.”

He also advises potential transfer athletes to have plenty of questions prepared when contacting new programs.

“It’s a good way to compare different programs and players on the team to understand the atmosphere of the school.”

Nelson feels strongly about the importance of a schools overall feel and said his future teammates played a large role in giving him a sense of the community at Seattle U and played a key role in his decision to transfer.

“[Seattle U has] great staff and great players; I’m looking forward to that and where it takes us.”

The transition into Seattle U was also made less stressful for Nelson as his professors eased him into the process, despite having been put into winter quarter classes late.

“The people are very open, and my teachers have been so much of a help with catching me up on everything I’ve missed.”

Nelson, like many transfer students, came from a school on a semester schedule, meaning he also had to adjust to the quarter system at Seattle U.

“It’s a little bit quicker here, I was on semester and you guys are on quarters. The course load is a lot lighter because I had six classes though.”

Despite these key differences, Nelson has had a seemingly easy transition otherwise. After quickly finding his place within the Seattle U community and team as whole, Nelson has been vocal with his aspirations for the team moving forward into his first season as a Redhawk.

“The guys are awesome, it’s a great group, I’m expecting a lot out of next year.”

Seattle U’s Men’s Soccer team has a strong reputation to uphold, and Nelson expects no less than for his new team to live up to it.

With his consistent success as a goalkeeper in the past and smooth transition into Seattle U, Nelson could be a key addition for the Redhawks next year.