Tschabalala Self: Telling A Tale Through The Body 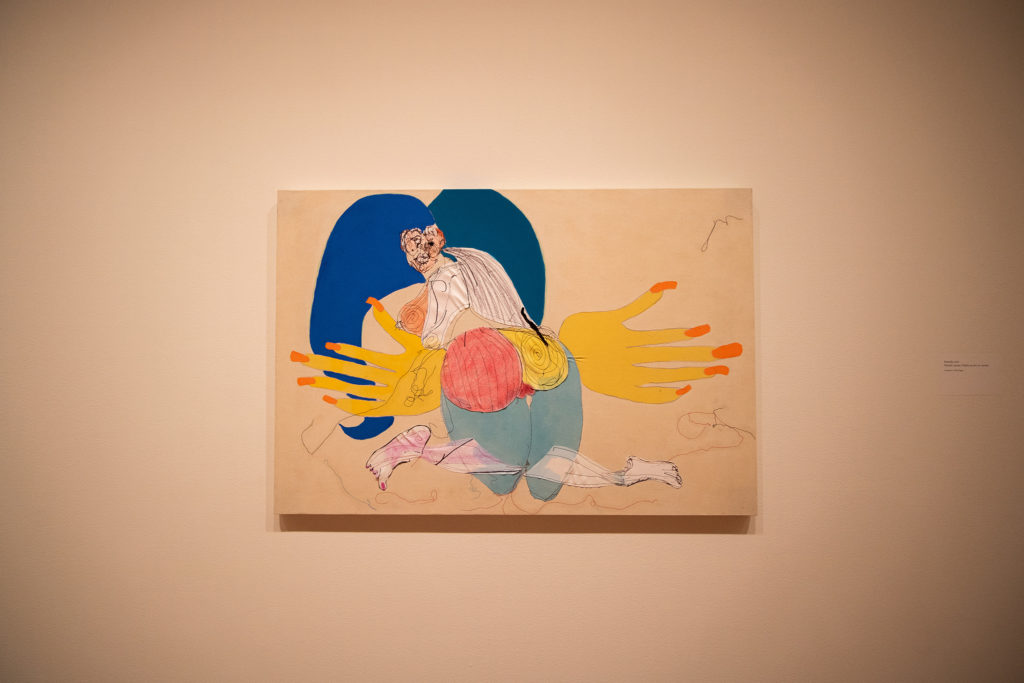 Tschabalala Self abstracts the feminine form in order to bring a new persepctive to its contemporary meaning.

One of these is titled Tschabalala Self, a self-titled exhibit named after the artist. Her name a tonguetwister to say the least, but she offers a notable exhibition nonetheless. As I walked into the Frye Museum for the second time since moving to Seattle, I was surprised by the sheer number of families, curious individuals, and older couples that loitered around the entrance. The price of the museum, or lack thereof, seemed to throw some visitors off—it’s not everyday you can explore a museum in Seattle free of charge.

As I continued through the museum, I was immediately taken aback by the vibrant yellow walls that signaled my arrival at the first of three new exhibits. The words “Tschabalala Self” written boldly in black caught my attention and to the right stood a single, rectangular piece of contemporary art.

As I looked for more background information to give me some perspective, I could not help but take another glance at the wall; the use of springtime hues ranging from pink, orange, red, and the occasional blue truly made the piece come alive. The next thing I noticed would have to be the fabrics used. Normally, when art comes to mind I envision pen on paper. However, Self’s work brings together much more than the simple duo. Through painting, drawing, sculpture, and video, characters are not just established but come alive before viewers’ eyes.

But how did Self come to create such unique works and why? Upon further inspection and after asking a few museum docents for insight not provided by the pamphlet, I learned that Self lives and works in New York City and New Haven, Connecticut. After receiving her BA from Bard College in 2012 and her MFA from the Yale School of Art in 2015, Self began to create the works she so frequently envisioned. In this particular piece, exaggerated physical autonomy and unexpected positions portray acts of defiance through ordinary pleasures.

As such, the individuals created by Self are seen leaping, dancing, touching themselves, coupling, and contorting their bodies according to their own desires. The specific physicality of the characters further reflects her contemporary cultural attitude on both race and gender.

By creating unique, somewhat unruly individuals, Self declares both agency and respect for one’s own autonomy. And walking through the exhibit, I could see others as well as myself showing a deeper appreciation and respect for statements like Self’s.

Wandering further into the depths of Frye Art Museum meant discovering more of Self’s impressive pieces. From leopard print felt to slideshows depicting bodies rapidly changing from one position to the next as fast as the blink of an eye, nothing was for certain.

As I watched the reactions of those around me, some seemed intrigued by such characters. Others didn’t seem to understand—they stood in a state of bewilderment as the pictures flashed before them again and again. As I later learned, the purpose of the avatar display was not to entertain or confuse viewers but more so to celebrate the complexities of black life and culture.

In its entirety, Self’s first solo museum exhibition in the United States did not disappoint myself nor those around me. The lively, radiant colors and imagery depicted through avatar-like characters captivated its audience and proved worthy of attention. Upon inquiry, I could not find a single person who was disappointed in the exhibition— some appeared confused but intrigued nonetheless.

The Frye Museum, consisting of a wide variety of modern exhibitions requiring utmost attention and interpretation from audiences of all ages and backgrounds, proves notable. Not only is it free to all visitors, but the modern space provides new exhibitions frequently. Located a mere three blocks from campus, students should take advantage of such an interesting opportunity to experience the enlightening qualities of art for themselves.