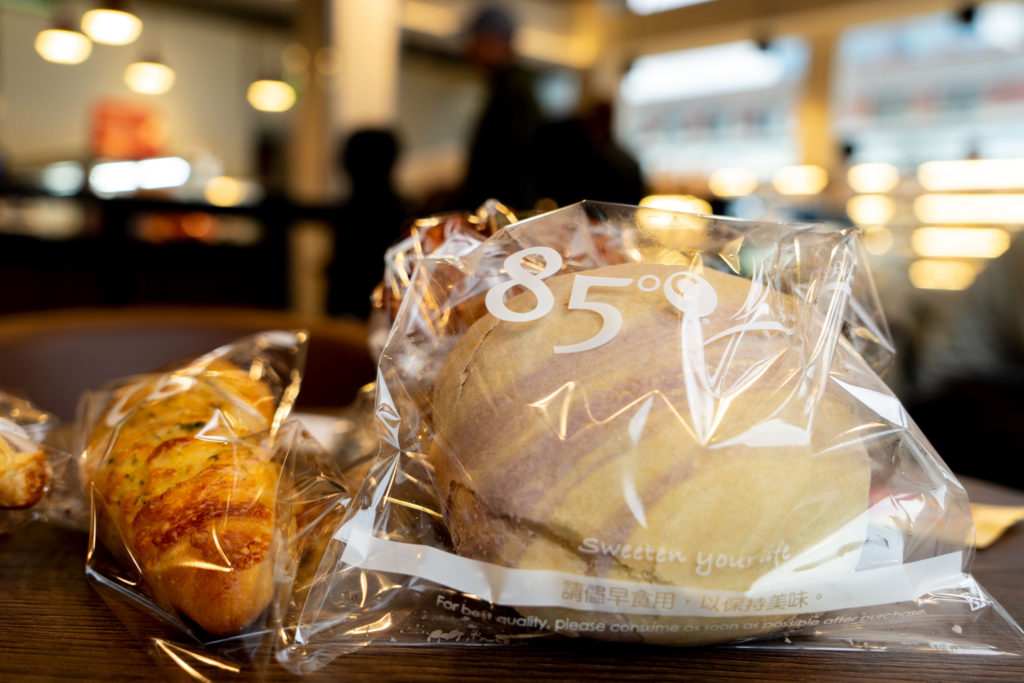 A new branch of 85°C Bakery opened on 5th and Jackson in the International District.

85°C Bakery Cafe is a respite from the cold weather—a pleasantly warm bakery with the smell of freshly baked bread wafting from the kitchens. When you first step into the little shop, you are greeted with a delectably sweet aroma and the workers bringing out fresh bread and calling out drink names. Amidst the bustling workers, a long and winding line of people staring longingly at the cases of bread snake haphazardly through the store.

In the display cases, delectable fluffy brioche bread is lined against a case of round lumps of coffee bread and the shine of glazed choco buns stands out, as do the petite egg and cheese tarts located across from the bread cases.

“The brioche and marble taro are the most popular (treats),” Sam Hash, the general manager of the Lynwood 85°C Bakery Cafe branch, said. Hash has been helping the new employees transition to working at the International District. The sound of bakers calling out “fresh bread” is as endearing as the sweet smell that grows stronger when hot bread comes out of the oven. 85°C Bakery Cafe also makes an assortment of beautiful cakes with fruit piles, glazes, and powdered sugar. They do not seem as popular, considering most customers are overwhelmed by the sheer amount of bread available.

The names of the treats, however, are a bit confusing. In a surprising twist, the Taiwanese bakery chose not to use the traditional Japanese name for red bean buns (anpan) but did use the Japanese word for green tea (matcha). Even more bemusing is the bun titled “Hawaiian Chicken,” which attempts to turn ham and pineapple pizza into a savory muffin.

In addition to the copious amounts of bread selections, 85°C Bakery Cafe offers an overwhelming amount of drink options. By a massive consensus, the most popular drink is the sea salt coffee. To sweeten the deal, 85°C Bakery Cafe offers two for the price of one sea salt coffee drinks on their ‘Coffee Mondays’. Hurry to enjoy this delectable treat before the deal ends on Feb. 25. Their other drink options include a variety of milk teas, espresso-based drinks, and teas.

If you decide to check 85°C Bakery Cafe out for yourself, there are a few things to keep in mind. The first being to prepare for waiting in long lines, surrounded by the tantalizing aroma of fresh bread and melting butter. It is a small torment to be able to touch, smell, and see the treats, but not eat them while waiting in line. Do yourself a favor and download the 85°C Bakery Cafe app while you are waiting in line. Once you get a taste of that bread, you’re going to want to start earning points to win free rewards.

The one major downside of the bakery, besides the long lines, is that it is not conducive for social gatherings. There are very few tables and seats available, and these are usually already taken by the time you escape from the line. In addition to the unlikelihood of 85°C Bakery Cafe implanting itself as the next popular meeting place, it will also not become your next study spot, not only due to the lack of seating, but mainly associated with the fact that they do not provide wifi.

Nevertheless, if you are a fan of all things delicious and breaded, you should definitely make it a point to try 85°C Bakery Cafe’s delectable treats. If nothing else, check out what makes this bakery one of the fastest growing small restaurants in the United States. It has even been referred to as the “Starbucks of Taiwan.” To put simply, this bakery is where New Year’s resolutions to be more healthy go to die.

The sheer amount of options is what makes 85°C Bakery Cafe stand out amongst all of the other bakeries located around Seattle and make it a mandatory destination for any bread or dessert lovers.