And Then I Got Fired: Addressing Trans Employment Discrimination 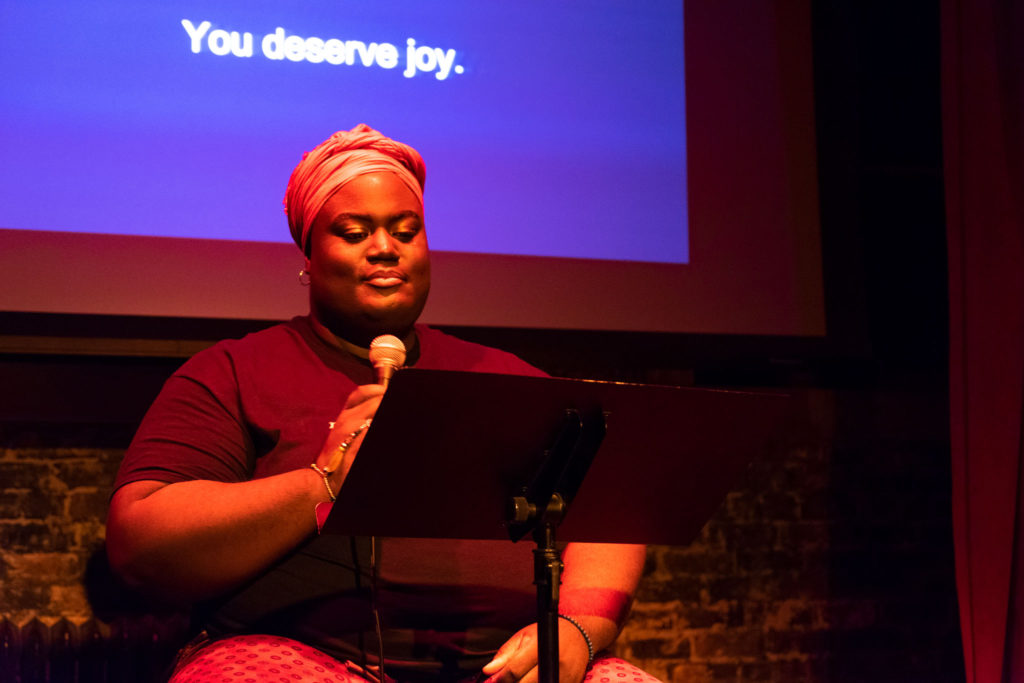 An artist performs a heartfelt poem about working in a world of sexual divsion, juxaposed with phrases from the poem projected behind them

Gay City, Seattle’s center for LGBTQ people, hosted the show “And Then I Got Fired: On Being Trans, Unemployed, & Surviving Anyway.”

The show was held on Jan. 17-19 in Capitol Hill, presented and hosted by J Mase III. The show presented and gave space for trans artists of color to share the reality of living in today’s society with focus on the difficulties of (un)employment for trans people. Their art and message was depicted through a collection of poetry, dance, and song. Ranging from comedy, self-reflection, and humbling acts, the acts were intended to share stories and address common struggles.

J Mase III, is a Black-Trans-queer poet and educator from Philadelphia. Mase works with LGBTQ people from Canada, UK, and the US, based in Seattle. He mainly works on LGBTQ+ rights and racial justice in schools and universities, as well as faith communities.

Mase’s work has been featured in the New York Times, Buzzfeed, the Root, Teen Vogue, MSNBC, and Black Girl Dangerous. He also boasts the title of the founder of awQward, the talent agency for trans and queer people of color. According to the show’s program, Mase is currently working as the head writer of the theatrical production, Black Bois, and is the coeditor of the #BlackTransPrayerBook.

The show’s title and main focal point was an ode to a time when Mase was faced with inequality in the workplace and was terminated from his job for being trans. In a comical haiku poem, Mase had two words for his ex-boss, inappropriate but appropriate for a dislikable boss of the sort, then tied in the rest of the poem to convey the message of standing up for oneself in times of distress while also moving forward in life with a positive outlook.

The first performer, Deja Baptiste, spoke a self-reflecting poem in a remorseful tone that swung back and forth to an uplifting and strong tone about the “rights and wrongs” of living in a binary-specific world. Baptiste would later return to center stage to perform a healing dance with a sexual tone about expression of freedom and self-love of the body.

Baptiste is an artist who creates spaces for spiritual and communal exploration in regard to sacredness, identity, history, and spirit. She develops and publishes articles, podcasts, and vlogs. She is currently trying to base her profession in New York City.

The second performer, Jade Dynasty also began with a poem, highlighting her life by experiencing an abusive society that often leaves her without work. However, she is by no means weak, as she rises every single day so she can get paid. Dynasty also later returned to perform a healing dance.

Dynasty is a national multidisciplinary performing artist and sex worker advocate of Dutch/ Indonesian descent. She is now based in Philadelphia but calls Seattle home.

The final performer, Scarlett D’Giacomo, is “an amorphous cloud of psychic energy from the constellation Cassiopeia temporarily occupying a human form.” D’Giacomo performed a long meditative poem of song with main themes of rebirth from degradation.

To summarize the lasting impact of the show, the performances are in support of the LGBTQ communities. Similar to GayCity’s main purpose, the show facilitated accessibility, developed LGBTQ artists, and is committed to providing a challenging and dynamic artform ranging across various disciplines.

GayCity provides a home and community by providing resources and options for wellness of the person. In connection to resources and services in the Seattle area, one can use GayCity’s Resource and Referrals Database, library, and can speak with staff and volunteers. As the leading provider of HIV and STI testing in King County, services also include advice and HIV/STI testing in relation with Out of the Closet Thrift Store.