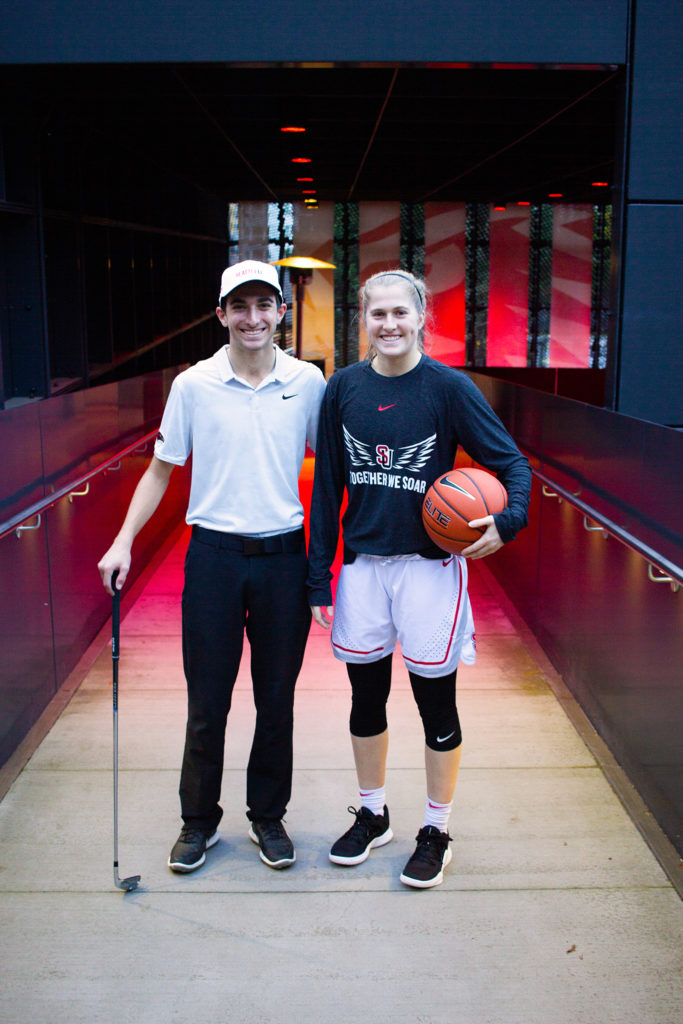 This year, Seattle University athletics welcomed twins—first-years Sarah Rahon, a guard on the women’s basketball team, and Jack Rahon of the men’s golf team. Coming to Seattle U from Orange, California, the two student-athletes are both majoring in business.

Sarah played basketball for Mater Dei High School, which qualified for the state tournament two out of the last three years. Sarah also played for one of the top AAU basketball teams in California, Cal Sparks EYBL.

Jack was on his high school’s varsity golf team for all four years. He went 66-1 in match play. Along with his impressive record at Servite High School, he was also a participant in the 2018 U.S. Amateur Championships.

“Our dad was an athlete in college so he kind of put us in all sports when we were young to see which ones we liked,” Sarah said. “I think we both played almost every sport but we finally we just chose a sport like our sister did.”

Sarah and Jack are not the only athletes in the Rahon family—their older sister Kaitlin was a gymnast at the University of Minnesota where she competed at the Division I level as well.

“Our family is very competitive and athletic,” Jack said. “Sports definitely had a very big impact on our family.”

Golf, gymnastics, and basketball are about as decidedly different as sports can be, but each of the Rahon’s eventually found their individual passion. Their parents put them in various sports in order to find what they were best at and enjoyed the most.

“I fell in love with golf, I played baseball for about seven years and it was between baseball and golf. I just loved the challenge you received every time you tee it up,” Jack said. “Every shot is different, and every course is different, and I just like the variety.”

Sarah was similarly divided between two sports—basketball and soccer— had to make the decision to stick with one. Eventually, she decided to pursue basketball.

“I think ultimately, I just fell in love with the sport. Its brought me everything in my life and I don’t know what my life would be like without basketball. It’s just something I think about 24/7 and that’s what I think is love,” Sarah said.

When the decision time came for both Sarah and Jack to pick their college, it was Sarah who committed first.

“I went up here in August of my senior year and committed on my visit,” Sarah said. “I told Jack that I loved it and we found out there was a golf team and he really liked them as well.”

Heading off to college is often an overwhelming time in one’s life. Leaving behind friends and family to start a new life can be a jarring experience. Sarah and Jack, however, have been able to have a smoother transition than many.

“I think we’re closer now then we were before,” Sarah said. “Going to college is a hard thing for a lot of people, it’s a new environment, a new life and just being able to travel knowing that your sibling is here, is a good feeling. We live in California, but I have my brother across the hall.”

Jack added that it made the transition easier for him as well, especially because Sarah moved up during the summer.

“I was here this summer for basketball and the weather was amazing. Now it’s raining and cold, but I like the four seasons,” Sarah said.

With both the Rohan twins adjusting to Pacific Northwest weather, they have also had to adjust to playing at the collegiate level.

“The transition from high school basketball, I didn’t think it would be as hard as it was, it’s very different,” Sarah said. “One thing that I noticed is different between high school ball and here is that I’m falling back in love with basketball. In high school I loved it, but now I know the real meaning of basketball, that is kind of why I came to this school as well.”

With both Sarah and Jack playing such different sports, they like to step outside their comfort zone every once in a while and play each other in their individual sports.

“I’m alright at basketball,” Jack said with a laugh. “She sucks at golf.”

“I’m pretty competitive in golf,” Sarah said also with a laugh. “But when I get on the course, I have no patience.”