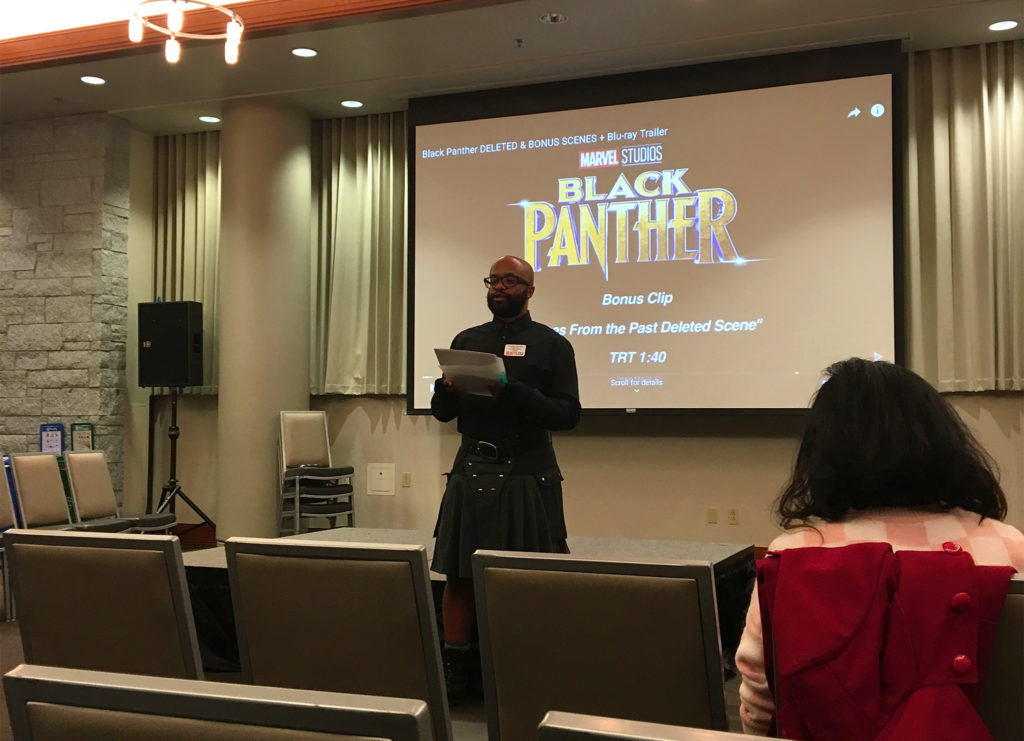 Stan Lee is known for making history. Not only did he found Marvel Comics and become a pop culture icon, but he was also involved in the creation of Black Panther—the superhero that would later inspire the successful 2018 movie production.

“He was a man of integrity who had a lot to lose and really nothing to gain,” Kimberly Harden said, the appointed lecturer in the Department of Communications at Seattle University. “He started out in the 60’s right in the middle of the civil rights movement. It could have gone sideways… Instead [Stan Lee] actually had a wider audience; the fact that he stood up when he had everything to lose.”

Harden spoke at a Dec. 3 event, Moral Mondays, a group that meets every week to discuss the political climate of Seattle U with a focus on the Black-Lives-Matter movement. While the group meets every week, this specific meeting was put together to celebrate the life and legacy of Stan Lee.

Lee died on Nov. 12 and left behind an extensive legacy, rich with the presence of iconic heroes and universes. In particular, the event focused on the women featured in the Marvel Comic movie hit “Black Panther.” The only Marvel Comics movie to outperform Black Panther in terms of ticket sales is the first “Avengers,” released in 2012.

Torren Broussard-Boston, a digital arts student at Seattle U. BroussardBoston was inspired by Stan Lee and Marvel Comics—particularly the Black Panther comics—and is in the process of creating his own comic book that will further the narrative of black characters.

“This shows that black films work, that black actors, movies… it works. It gets you a message. it’ll touch your heart in a way that you just didn’t think would happen. And that is something that was shut out a very long time ago,” Broussard-Boston said.

The main focus of the event was on the depiction of women in “Black Panther.” This is something that Emily Berg, a sophomore marketing major at Seattle U, is passionate about. In one of her articles for “Her Campus,” Berg specifically focused on the impact that Lee had on Marvel Comics and the movie industry.

“It’s really interesting to see the progression of strong groups of women. Like the Amazons in “Wonder Woman” and the valkyries in “Thor: Ragnorak”… this resurgence and realization that, ‘oh we should represent 50 percent of our population in the media,’” Berg said. This is highlighted by the fact that Dora Milaje was at least partially inspired by the Dahomey Amazons, a historic all women army that existed in West Africa through the 17th and 19th centuries.

Berg continued speaking about the female Wakandan warriors: “[The women] were Wakandan. We are the warriors. People don’t want to acknowledge that they want to dismiss it—but if you look at it politically it’s always the black women who tell the truth and always save the day… and the fact that this movie showed that is significant…”.

This is something that Stan Lee would most likely have agreed with, considering his own political thoughts illustrated in his column “Stan’s Soapbox.” These consisted of short paragraphs published at the back of every Marvel Comics issue between the years 1965 and 2001. These columns featured Lee’s thoughts on everything from the meaning of stories to the importance of peace.

These published opinions are so important in the construction of Lee’s legacy that Brown started the event with a quote: “It seems to me that a story without a message, however subliminal, is like a man without a soul… None of us lives in a vacuum—none of us is untouched by the everyday events about us—events which shape our stories just as they shape our lives. Sure our tales can be called escapist—but just because something’s for fun, doesn’t mean we have to blanket our brains while we read it!”

This being said, it is impossible to talk about the message behind the “Black Panther” movie without mentioning the Black-Lives Matter movement. In regards to the movement, Berg said, “Having the Black-Lives-Matter movement being such a prominent movement in America… It sort of helped audiences be okay, or at least appreciate, the fact that a Marvel movie could be talking about these topics.”

Even without the influential Black-Lives-Matter movement, which was even the inspiration for the Moral Mondays initiative at Seattle U, Harden believes that the movie would have been a global phenomenon.

“I think the fact that the movie came out in the middle of [the movement] gave black people a bit of confidence and showed our strengths and it really helped us eternalize that — whether or not we were actively protesting or doing other forms of protest, it made us say that ‘hey, as a collective, we can actually do this.’”

Amid this discussion were questions about the true nature of the conflict between the protagonist of the “Black Panther” movie, T’Challa, and his opposition, Killmonger.

“The rivalry between Killmonger and T’Challa was based off them being two different black men. One here had faced adversity and racism for the entirety of his life and the one who hadn’t,” Broussard-Boston said. “Even in today’s society, I really don’t like saying it, Africans don’t really like black people. They don’t like African American people. And I have heard it all the time, that I am not African, I am not really black. I don’t know where my roots are- and it’s very true, I don’t. But for Lee to bring that argument to the public was fantastic.”