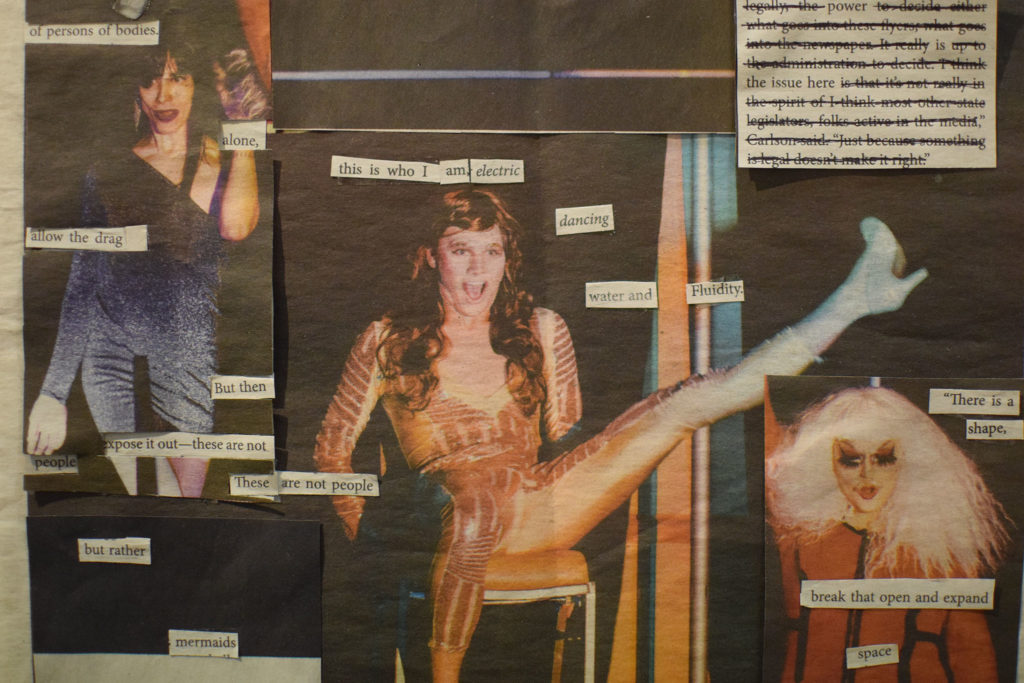 Dev McCauley’s pop up art show in the Fine Arts building explores the experience and issues of being a trans student on Seattle U’s campus and features recreations and manipulations of The Spectator’s drag show cover from last spring.

In the cozy and warmly-lit basement of the University Branch Public Library, people gathered in a large meeting space for the third round of the library’s Trans Shorts and SpeedFriending event on Nov. 12th. Seeing its largest turnout yet, the event featured five short films centered around transgender identity and hosted a speed-friending session where all participants had the opportunity to meet each other.

In the face of the Trump administration and a seemingly endless steam of negative news, occasions like this invite the trans community to resist isolation and to celebrate their identities in an accessible way, Seattle U alum and Executive Director of the Seattle Nonbinary Collective Adriaan Dippenaar said.

“There’s so little trans representation, and it is so powerful to have us represented in that medium,” he said. “It’s easy to come together over film. You laugh and cry and are excited about them together, so it’s a great way to make connections with communities and to collaborate with other organizations.”

Partnered with Three Dollar Bill Cinema and Twist: Seattle Queer Film Festival, the library screening included an animation called “Rebellious Essence” and several documentarystyle films, all of which were under 12 minutes and discussed transgender identities in diverse ways.

Kristy Gale, teen services librarian at the University Branch and cocoordinator of the Trans Shorts event, notes the positive responses that she received from many attendees.

“There were a few people that did talk to me afterwards to say that this event was needed, especially right now,” Gale said. “Some of them said they wanted to come in the past, but just didn’t make it for various reasons, but this time they felt like they really needed it.”

Gale attributed much of the inspiration behind the event to her coworker Micah Kerein. After pondering on what to do for Transgender Awareness Week in 2016, they wanted to ensure that the event was celebratory. The two librarians agreed that while it is necessary to mourn losses as a part of social awareness, the trans community also needs things to take joy and pride in and to look forward to.

“Already being prone to anxiety in that way [isolation], makes all the political stuff—especially if you have intersecting identities—really, really nerve-wracking,” Dippenaar said. “It is incredibly powerful, the ability to come together and have a social space where we can rebuild that social capital that we don’t have.”

Dr. McLean Sloughter, associate professor of mathematics at Seattle U, said that after the controversial incidents surrounding the Drag Show last year and continued insufficiency of support for queer and trans students, he has been participating in more and more events like these to build connections and listen to LGBTQ folks’ experiences.

“It was a great opportunity to get to know a bunch of people that I might have never crossed paths with otherwise,” Sloughter said.

Sloughter said that to bring transcentered celebratory programs like the University Branch’s event to the Seattle U culture, it will take a lot of organization and investment among students and faculty.

“I think that if we have people who want to make the effort to make that happen, there is space for it here to happen,” he said. “I think that’s true of most social progress, which could in part be a statement who are in positions of power versus not, but it’s also the way that the structures work.”

Gale said that she was not familiar with the process of hosting events on college campuses, but did mention that at her library, justifying the reasons for hosting an event played a large part in securing the resources her team needed to put it on.

“Based on the previous success of our past events, it’s hard to say ‘no’ to because we were able to outline the reasons why holding this event makes sense for the community.”

Many agree that it also makes sense to bring trans celebratory and community-building events like the University Branch’s to Seattle U, especially given both national efforts against trans rights and incidents that have occurred on campus in the past two years.

“It gives a lot of material support if you are tangibly marginalized by [the effects of the Trump administration],” Dippenaar said. “If your healthcare is cut off, if there is access to people who might be able to crowd-fund you some funds, or if you have needs around an operation, or whatever, you just have more people around to support you.

Elizabeth may be reached at
[email protected]