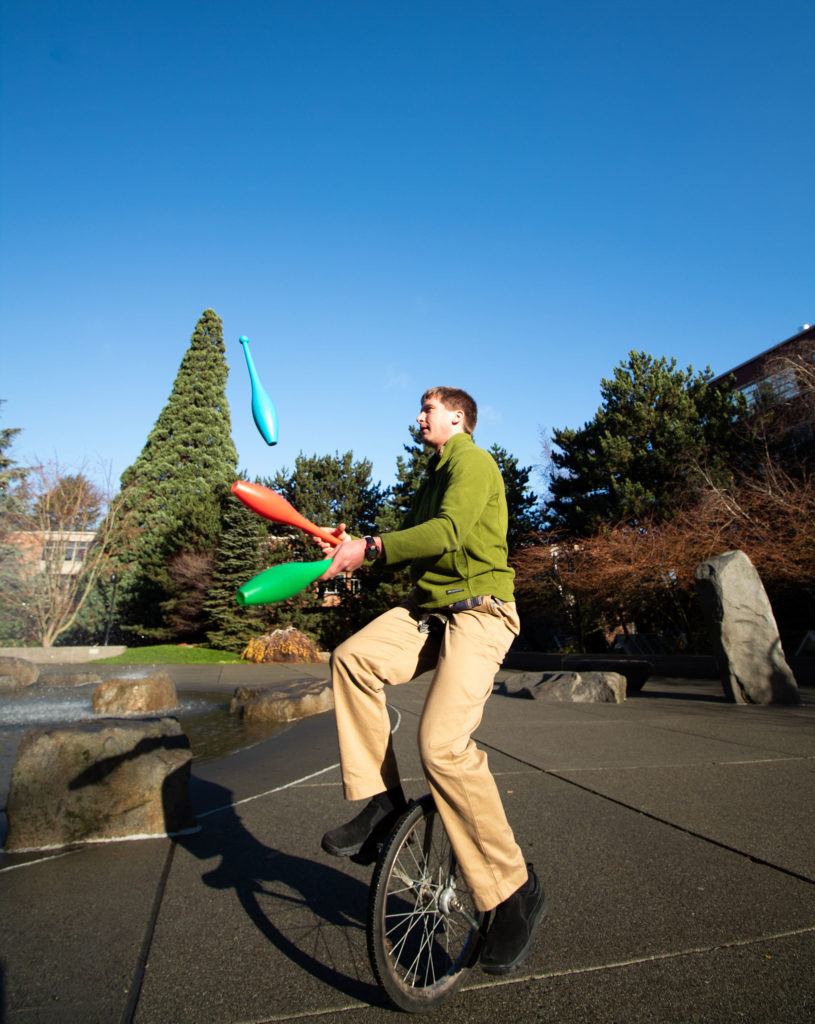 The Circus Club at Seattle University has everything you love about the circus, minus Zendaya and Zac Efron singing a soulful love ballad while trapezing together.

With trapeze dreams and training under her belt, Abigail Leong founded the Seattle U Circus Club just this year. As a Communications and Media Junior and current club president, she reached out to Mechanical Engineering professor Eric Gilbertson for guidance. He holds the world record for juggling the most objects while unicycling.

Leong has about half a decade of experience as a flier. With two flying trapeze rigs here in Seattle and the lack of any in her home state of Oregon, she expected to find more students from Seattle U involved in trapezing, but was shocked to find that there were none. This was part of her inspiration for creating the club.

“I know in college we are always looking for things to do, we’re looking for a community, and we’re looking for fun, as well as being in school and focusing on exams and stuff,” Leong said. “I thought that Circus Club would be a great way for people to get out in the community and get people engaged with each other, doing something that brought people together and taught people that performance arts are important and that they’re, you know, a thing here at this school.”

This quarter, being the first quarter that Seattle U Circus Club has existed, Gilbertson has been teaching juggling classes with bean bag balls every Thursday evening at the racquetball courts in the Seattle U Redhawk Center. Soon, he will be bringing other object to juggle, including rings, clubs, diablos and devil sticks.

Those that want to join can come as much or as little as they want, with all practices open to newcomers. This is what Sophomore Biology major Karina Comes and Sophomore Mechanical Engineering major Thuy Truong did for their first meeting.

Truong took a class with Gilbertson after hearing him talk about the club and his juggling experience. Intrigued, she came to the club to join in on the juggling workshop.

When asked what she hoped to get out of Circus Club, Truong expressed her interest in creating a new hobby, wanting to learn “how to juggle, first of all, and to enjoy, myself, really.”

Comes came to the club with four years of prior juggling experience.

“I got bored and it looked cool, in short,” Comes said, when commenting on her intial interest in the club.  Comes recommends joining because it is both an enjoyable and challenging experience.

“It’s fun and you push yourself to do things and you learn to like failure because it means that you’re getting better,” Comes said.

A lot of new things are on the horizon for Seattle U Circus Club, including a partnership with Jumpstart preschool where members will go and teach the preschoolers juggling. They will also be introducing Leong’s first love, trapeze, in collaboration with Emerald City Trapeze Arts. Her hope is that students will become interested and eventually want to perform with Emerald City Trapeze Arts. If you go to one of their classes, you can join in on the next performance.

The easiest way to join the Seattle U Circus Club is to get notified of their meetings and workshops by registering through ConnectSU.