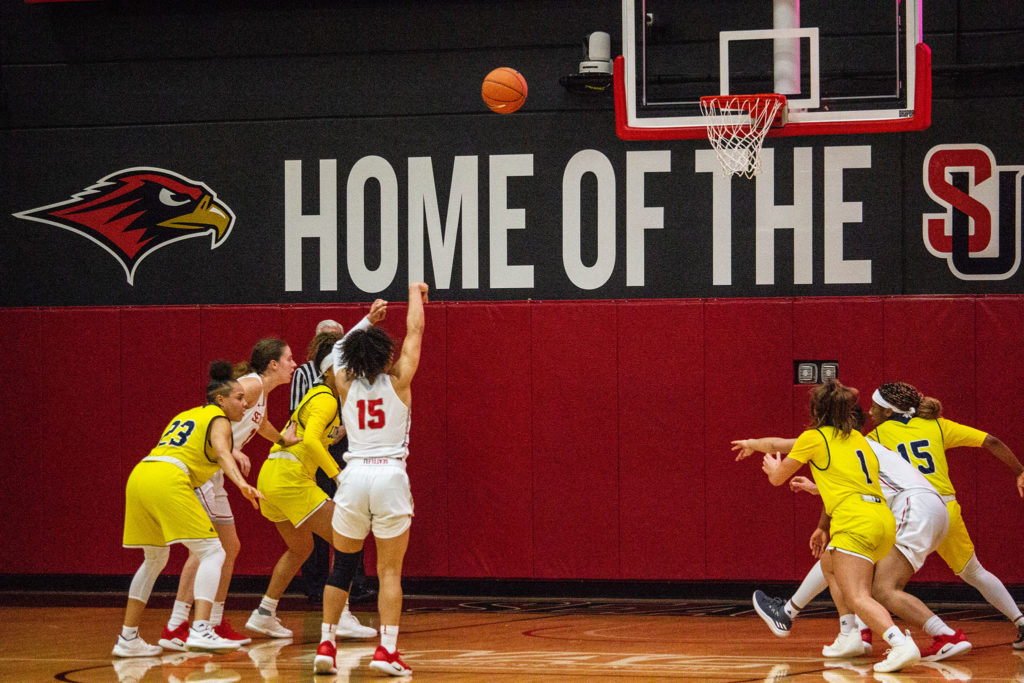 Kamira Sanders shoots a free-throw as fellow Redhawks prepare to box-out for the rebound.

CSUF held a 22-14 lead at the end of the first quarter. In the second quarter, Joana Alves, Leilani Peat, and Kamira Sanders led a momentous comeback. Carla Bieg capped off the first half as she was fouled and hit two free throws, tying the game 31-31.

During halftime, several Seattle Storm players were recognized for their own 2018 Championship.

The third quarter remained tight, and with five minutes remaining in the fourth quarter, the Redhawks held an eight-point lead. This didn’t prove to be enough as CSUF stormed back with 11 unanswered points to take the win 57-54.

In their second home game of the year, the Redhawks faced Northern Arizona University (NAU).

Down 33-25 at the half, Seattle came back in the fourth quarter to take the lead. The game was neck and neck until the end, but NAU prevailed, defeating the Redhawks 65-58.

Sanders led Seattle with 21 points and Alves had a personal best 15 points and 12 rebounds.

“We had a lot of positives, we got better from last game,” Junior Alves said. “We are improving every day, but we just need to be able to finish games. . . We take every game as that one game and don’t think about past or future games.”

Women’s basketball will continue their season in Hawaii against both the University of Arizona and the University of Hawaii Nov. 16 and 18.
Volleyball
Seattle U Volleyball traveled to the midwest to face Chicago State (CSU) this past Thursday, Nov. 8.

Falling in the first set, the Redhawks held a lead in the second but CSU refused to yield. With eight tie scores in the set, CSU would eventually break the stalemate and take the set 29-27. The third set saw 11 tie scores and CSU come out victorious, completing their sweep of Seattle U.

Leading the offense against WACleading UMKC on Saturday was Rachel Stark. Stark had nine kills and Sofia Sanchez had eight of her own. UMKC swept Seattle with set scores of 25-21, 25-22, 25-22.

Seattle U will finish off the regular season at home against Grand Canyon on Nov. 15.
Cross Country
The Seattle U Cross Country team traveled to Sacramento, California to compete against hundreds of runners from some of the strongest collegiate teams in the NCAA West Regionals.

In the Women’s 6k, sophomore Rachel Kastama led the Redhawks, coming in at 22:41.5. Sophomore Megan Delorey was just behind her at 22:43.5. The rest of Seattle’s women would finish within 77 seconds after. The Seattle U women placed 31st of 36 teams and 250 runners.

As Cross Country comes to an end, Seattle U is looking forward to the upcoming indoor season of Track and Field.