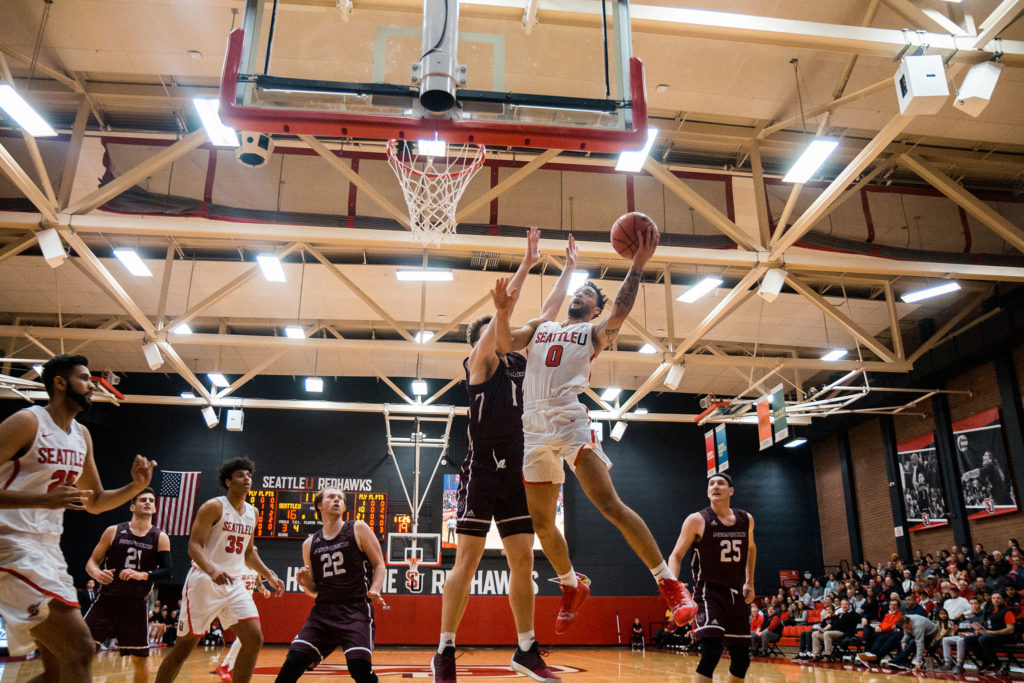 Dashawn McDowell driving hard to the basket for the Redhawks as they take down UPS in their season home opener on Wednesday, November 7.

Basketball
This week saw the beginning of the men’s basketball season. The Redhawks began the season away at Stanford, losing 74-96.

Throughout the majority of the game, the Redhawks were able to keep pace with Stanford. The two teams went back and forth early in the game with the Redhawks down 36-40 at the half. The team started to slip in the second half, being outscored 38-56, making the final score 74-96.

The first home game of the year was an entirely different story as Seattle University dominated the University of Puget Sound (UPS), winning 95-67.

During the game, Seattle U never trailed UPS, maintaining strong control over the court—and at one point in the second half, the Redhawks racked up a 30 point lead.

Redshirt junior Myles Carter achieved a double-double as he led all scorers with 23 points on the night and paired this with a game-high 12 rebounds.

The Redhawks shot well with a team field goal percentage of 56 percent, helped by the fact the Redhawks scored 54 of their 96 points in the paint.

In their third game of the season, the team played its homecoming game at the ShoWare Center in Kent against Bryant University. The team made the trip to the suburbs worthwhile for the fans, winning 82-59.

Carter earned his second doubledouble of the week, with 25 points and 11 rebounds, both game highs.

When asked about the game in relation to the other two games that the team had played so far Head Coach Jim Hayford stated, “[We] played a whole lot better then we did last week and that’s what we hope the story is of this team. Getting better every week.”
Cross Country
This week saw the cross country season come to a close as the team traveled to compete in the NCAA West Regional Cross Country Championship.

Overall the team placed 22nd out of 29 other teams and 212 other runners.

You can look forward to the team coming back in the spring to complete the year.