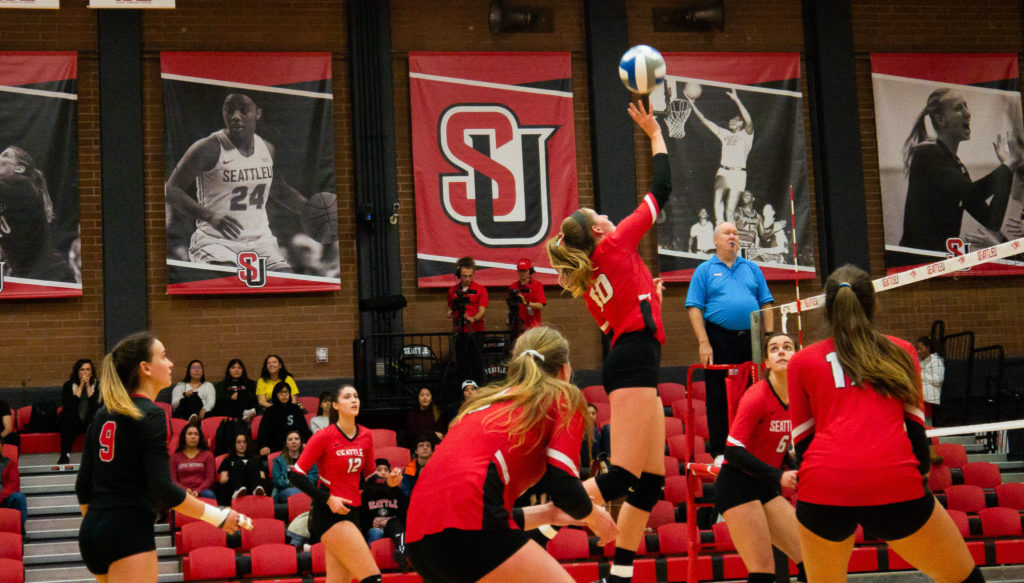 Women’s Volleyball
The Redhawks had two matches this week as they faced New Mexico State University (NMSU) and University of Texas Rio Grande Valley (UTRGV). Both matches were close; however, Seattle University fell short this week.

Saturday Nov. 3, Seattle U hosted the UTRGV Vaqueros. The Redhawks came out strong and forced an early timeout by UTRGV in the first set, but their opponents rallied and won it. The Redhawks again fell in three sets, losing 25-23, 25-13, and 25-20. Shae Harris was in great form and played out for her seventh doubledouble with 27 assists, 10 assists, three blocks, and two kills.

Seattle U will be on the road for the next WAC match on Nov. 8 at Chicago State.
Women’s Basketball
Seattle U hosted an exhibition game against Northwestern University (NU) on Friday. The teams were neck and neck for the entire first half, NU led by three at the half, 37-34.

NU expanded their lead to 10-points in the third quarter. Seattle U rallied in the fourth quarter as Delaney McCann, Kamira Sanders, and Madeline Dopplick made several three-point-plays for a 66-58 victory over NU. Dopplick led all scorers with 19 points on the night.

Women’s basketball play their first regular season games at home against Cal State Fullerton on Tuesday, Nov. 6 at 6p.m.
Women’s Swimming
The Redhawks were in Moscow, Idaho this week and went up against, Idaho and Northern Arizona, two of the top teams in the WAC. Seattle U lost against both, 251-41 (Idaho) and 24644 (NAU).

Seattle U will host an alumni meet on Nov. 10 a the Redhawk center at 11 am, and will be continuing competition at Oregon State University on Nov. 16.
Men’s Soccer
Men’s soccer regular season ended as the Redhawks faced San Jose State University (SJSU) in California. The game was scoreless until the 40th minute when Nathan Aune netted a header from Julian Avila-Good. SJSU evened the score in the second half and remained tied until the last moments of the match. With both teams hunting for a late goal, Noe Meza of Seattle U found the back of the net with 45 seconds left. Ivory Randle IV crossed a ball looking for Sergio Rivas, but Meza was the player to decide the game.

The Redhawks finished their regular season with a three-game win streak and overall in conference record of 7-4-0. Seattle U will host the WAC tournament Nov. 7-11th.

Alexandro may be reached at [email protected]