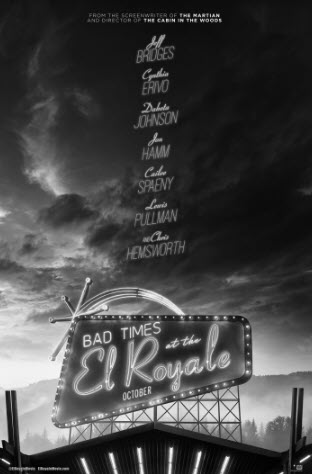 It’s easy to see where comparison’s to Quentin Tarantino’s works come from in concern to Drew Goddard screenplay writer of “The Martian” (2015) and writer and director of “Cabin in the Woods” (2012) – especially in his new film “Bad Times at the El Royale.”

A group of strangers together in a secluded area, told in chapters, jumping between past and present – sounds derivative does it not? That’s what I thought going into the film “Bad Times at the El Royale,” but it stood up on it’s own better than thought it would.

The performances, across the board, are fantastic. Jeff Bridges, as Father Flynn, and Cynthia Erivo, as struggling singer Darlene, are especially impressive in emotional scenes that will likely bring some audience members to tears.

Chris Hemsworth is mesmerizing as Billy Lee, a Manson-like cult leader, and steals the show towards the latter part of the film. The first hour plays like a mystery thriller as the audience tries to decipher the motives of each character at the bi-state hotel.

The film does, however, falter in the last half hour. Much of the first hour is spent in mystery right from the get-go with Nick Offerman’s character, Felix, planting money in a hotel room. From there, 10 years pass before our characters enter the El Royale with Bridges with Father Flynn and Darlene meeting a colorful cast of characters: Emily, played by Dakota Johnson, Larami Sullivan, played by Jon Hamm, and Miles, played by Lewis Pullman.

Very quickly, secrets slowly come out about each character and the hotel as well. The film has it all, with a hotel of hidden passages, wired rooms, two way mirrors, and characters pulling out all the stops with accents and wigs—it almost tries to be over-the-top.

The cinematography is fantastic and many shots linger on their subjects and are meticulously put together. Tracking shots and long takes with Hamm in a hallway and Erivo singing deserve particular praise.

Its purple and orange set design, highlighting the difference between California and Nevada, is also an intriguing choice. And while there are some quirks with half the hotel being in California and the other in Nevada, it’s largely forgotten as the film goes on.

The script, while very good, could have been snappier, and it would drag more had the performances not been as top notch.

But by far the biggest problem with the film is its pacing, and this reviewer is certainly not the only one who feels that way.

Seattle University student Matthew Grebert, who also saw the film, found he had a hard time describing his feelings about the about the film, and he “feels so split on different parts of the movies.”

Like myself, he enjoys the first hour but became less interested as the film progressed, and as he believes, became less focused. Grebert enjoyed the setup of film and how it introduced information, particularly Jon Hamm’s storyline. He felt the story already had enough to it, and when a cult shows up at the end of story, it “took away from the main focus of story.”

As we saw it together, while we walked back from the theatre we talked extensively about the style which the film was told through. Each character was given their own “chapter” where the audience would learn their story.

Goddard sticks to this storytelling model, almost to a fault. He takes his time introducing some characters to us, leaving them til the last half hour, and their past completely takes you out of the film and deflates the tension, especially in an edge-of-your-seat roulette scene.

I am slightly kinder to the last half hour than Gerbert for one reason: Chris Hemsworth. As out place as his story may have felt to me as some points, without him, the last half hour could have dragged this project down, which it does not deserve.

All in all, Goddard’s film has a lot going for it. Great performances, cinematography, and direction, with just a few story and pacing problems that bring it down. There is enough enjoyment and mystery here to keep you engaged and guessing on how the film will turn out. I was pleasantly surprised to be proven wrong on how derivative I thought it would be.