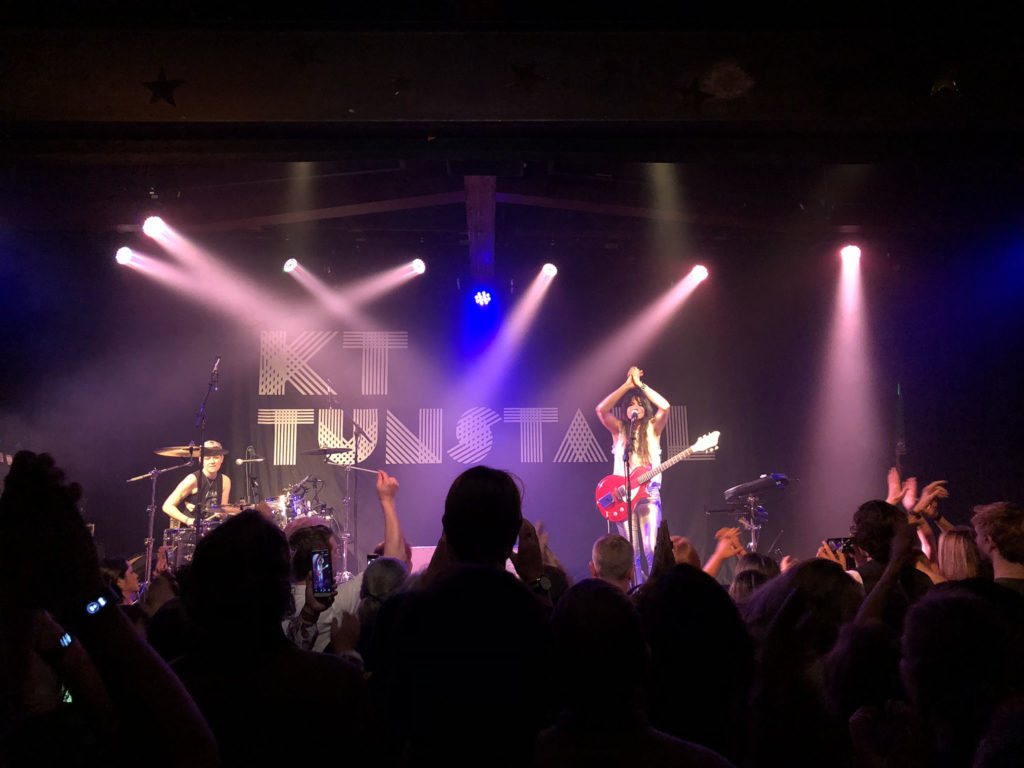 KT Tunstall performs at the Crocodile on October 17, 2018.

In the intimate glow of a single stage light, KT Tunstall stepped away from the microphone. Standing alone at the edge of the empty stage, she gently strummed her acoustic guitar and softly sang the chorus of “Feel It All” into the hushed audience. The crowd picked up the refrain, singing it back to her as she began to riff, the energy of her voice and her guitar ascending.

That moment, and the connection it forged between the audience and the music, was one of the most powerful sequences of a show that felt like a rock ‘n’ roll cleanse. Tunstall’s Oct. 17 concert at The Crocodile emphasized musical performance over showmanship, letting powerful guitar take the lead.

The show, supporting the release of Tunstall’s newest album, WAX, was strikingly different from her last Seattle show, back in 2016. The glitter and flair of the former two years was replaced with a back-to- basics performance and a stripped- back sound. It’s in line with Tunstall’s current project, a trilogy of albums representing mind, body, and soul. WAX is the second album of this trilogy, and Tunstall delivered the physicality of the “body” album in a rumble of charging guitar, driven by the bellowing drums of freelance drummer and certified badass Cat Myers.

The new balance of Tunstall’s sound did well for her newest songs, with ripping electric guitar cutting a path for sweeter melodies. The disco-rock of “Little Red Threads” was like a bigger, hungrier version of a Drastic Fantastic song, while “The Healer” was a swaggering power ballad complete with a jump-kick finish.

However, prioritizing guitar over vocals didn’t always fit her older songs. Tunstall opened the show by shouting, “We’re gonna start fast and loud!” Surprisingly, though, “fast and loud” meant an acoustic version of “Fade Like a Shadow” rather than one of the more aggressive songs from WAX. Some songs, like her number one hit “Suddenly I See”, were successfully transformed into rock anthems, but overall, the lack of strong vocals felt like Tunstall was pulling punches when it came to her soulful, husky voice, despite swinging plenty with electric guitar.

Thankfully, one thing that hasn’t changed over the years is Tunstall’s immense personality. Her stage presence is certainly quirkier than most rock stars, but it’s always genuine. She never put up a front, whether illustrating how short she is with an embarrassing story of meeting Jack White or explaining the slightly bizarre daydream behind “Little Red Thread” in which literal strings connect the people she saw at the airport. Even the goofy, cheesy comedy bits in between songs, like the “KT Tunstall Good News Show,” complete with breaking news music, seemed genuine due to Tunstall’s unapologetic positivity. We knew she meant it when she told the crowd to “Follow your dreams!”

Maddie Ross, the Los Angeles-based musician who opened the show, can attest to Tunstall’s shining personality more than most.

“I was on Twitter one day being a fangirl, and I retweeted something of hers,” Ross said. “A few hours later, I got a DM from her! She ended up listening to some of my music, and thought I would be a good fit to open on the upcoming tour.”

Six whirlwind weeks later, Ross was in Seattle for the second stop of her very first tour, named the “Friends and Family Tour” in honor of the loved ones who appeared at every show. Together with co-writer, producer, guitarist, vocalist, and girlfriend Madison “Wolfy” Scheckel, Ross gave a charismatic, excited performance. Her breathy talk-singing, cheeky lyrics, and abundant cussing fit right into the local Seattle sound.

It was a simple set, the stage empty but for Ross, Scheckel, and a drum machine. But with Ross’s confidence and unrestrained delivery, the performance felt more like a display of raw musicianship than an amateur show.

“It worked out perfectly,” Ross explained when asked (over Twitter, of course) how the simplicity of Tunstall’s tour impacted the set. “Rehearsing and traveling with a full band would have been very difficult to pull off in so little time – and expensive too!”

“She inspired my entire generation of singer-songwriters,” Ross said of Tunstall, “because she is a badass guitar player and great writer and singer. Honestly, she is a role model in every way – obviously musically, but also the way she treats her fans and her crew and everyone around her. It’s amazing to watch.”

Ross was right. At the end of the night, what made Tunstall’s show amazing was her stage presence and personality. It wasn’t the most high-production show Seattle had ever seen, nor a jaw-dropping musical performance. But that wasn’t the point. Tunstall forged a genuine connection with her music, and let rock and roll carry her and the audience for the night.