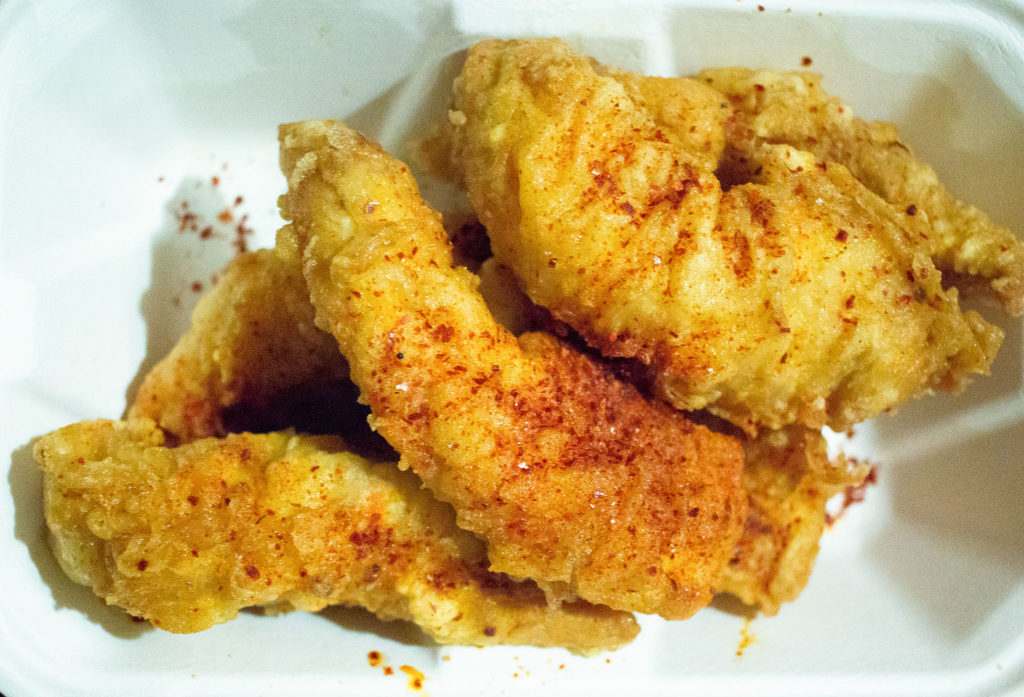 With only three total locations in all of Washington (two in Seattle and one in Burien), Bok a Bok Fried Chicken & Biscuits has become a popular dinner spot. The Capitol Hill location is located off 10th and Pike, just behind Neumos.

Along with fresh fried chicken, Bok a Bok’s menu extends into biscuits— which are also made on-site, fresh, and never frozen—chicken sandwiches, salads, and a variety of sides and sauces.

They have a huge light up sign that reads Bok a Bok Fried Chicken; it’s not hard to miss. The restaurant is quaint, with limited seating and waiting areas. The interior is cute and fun with their chicken head logo plastered all around the store.

I have been 100 percent gluten and wheat-free for the last four years and it has been quite the challenge. Fried chicken, such as chicken strips, chicken nuggets, and chicken wings, are typically dipped in a batter made from wheat flour and then fried in oil—for that delicious crunch. Being gluten-free means no fried chicken, unless I make it myself from scratch, buy something in the freezer section at Safeway, or if I’m in the mood to spend upwards of $6 per piece of fried chicken from a special gluten-free dedicated restaurant.

Bok a Bok has created a restaurant with a trendy twist, gluten- free! Made with gluten-free ingredients such as gluten-free fry oil, Bok a Bok’s fried chicken and sides are made hot and ready to go. Not only is the chicken gluten-free, it is also prepared with fresh, hormone-free chicken. The chicken is air dried then dipped and double-fried in their gluten-free batters and fry oil.

Check out Bok a Bok’s feature on Guy Fieri’s television show on “Diners, Drive-Ins, and Dives;” episode “Far East Flavorfest” aired on Season 28, for an inside look at their fried chicken and biscuit preparation process.

Fellow friends and Spectator staff, Alexandro Carrasco and Haley Dow, accompanied me last Friday night to venture into the world of Bok a Bok’s fried chicken. We decided to order online and pick-up in store because last time I went for order-in, I waited over 45 minutes and ended up having to take my food to-go due to the lack of tables. Their online ordering system is very easy to use and allows the user to add special instructions or comments on their order as well as choose a pick- up time.

I ordered the gluten-free Fried Chicken Crispy Chicken Wings ($6.55) and a side of Dirty Fries ($8) with my choice sauce of Bok-a- Bok Ranch. The chicken wings were delicious. I have to say though, I was slightly disappointed in the amount of crunch of the wing. When I ordered the wings last time, they were extremely crispy without soft or soggy pieces. I was expecting consistency in the crunch of the chicken so when it was just slightly-less, I was disappointed.

The “dirty fries,” however, blew my mind. Bok a Bok’s dirty fries (or tots) refers to preparing taters slathered in cheese sauce, crispy garlic, crispy onion, ranch, and a poached egg. The fries were soggy due to all the sauces, but the flavor makes up for this. The creaminess from the ranch mixed with the cheese sauce and textured with the crispy onion and garlic was heavenly. I ended up dipping my wings into the excess dirty fry sauce rather than my ranch.

Carrasco ordered the Spicy Chicken Sandwich ($8) and side of french fries with Korean chili salt ($3). The sandwiches are not gluten-free due to the bread, but the rest of the ingredients are. Beware, the spicy chicken sandwich is SPICY. Slathered in their four-chili hot sauce, and laced with jalapeno slices, the sandwich has quite the kick.

Lastly, Dow ordered the fried chicken breast strips ($13.85) and a side of tater tots with Korean chili salt ($4). The chicken strips were decently sized and extra crispy. The tater tots and french fries were both extra crispy and tasted amazing dipped in the Bok a Bok ranch and 4-chili hot sauce (50 cents for each additional sauce).

This unexpected gluten-free find is not only delicious, but also decently priced! I recommend all you fellow “gluten-freers,” as well as all you gluteners, to stop by Bok a Bok to try some of their amazing fried chicken and sides. Get your fried chicken on next time you get the craving!