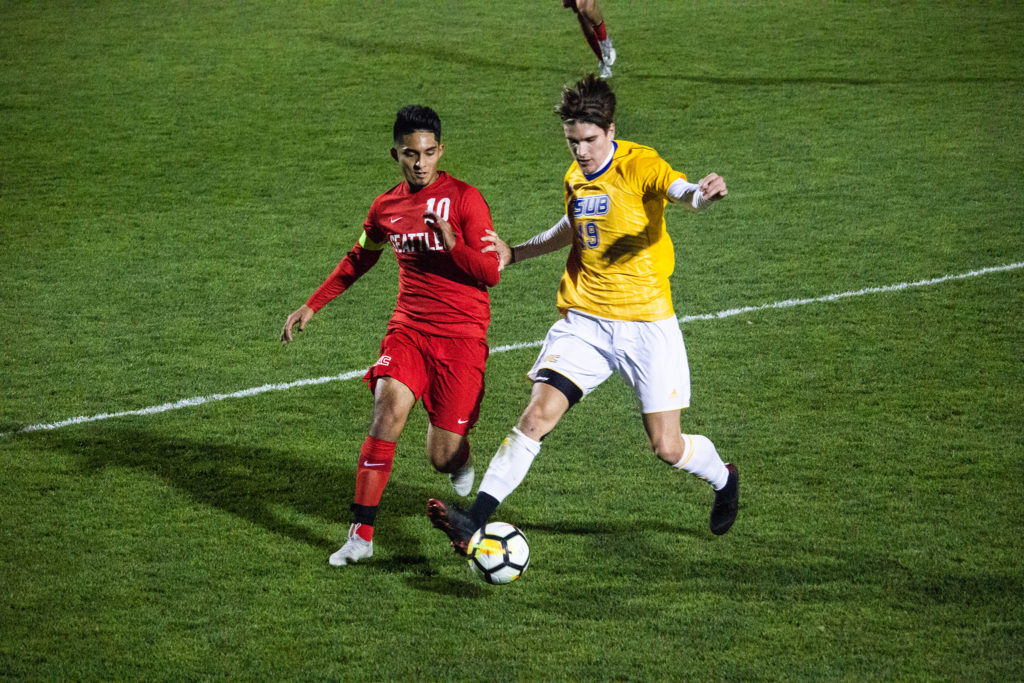 Sergio Rivas dribbles the ball down the flank of Championship field.

Saturday, Oct. 13, was match day for the Redhawks as they shutout CSU Bakersfield 2-0 at home.

Coming off a 1-0 loss against Grand Canyon University, Seattle University, quickly bounced back. The Redhawks obtained early first-half goals via Noe Meza and Hal Uderitz and held the lead with possessive dominance during the second half.

The win leaves Head Coach Pete Fewing one game away from a remarkable 300 career wins with Seattle U. Seattle U currently stands third in the WAC with a record of 10-4-0.

The Redhawks are currently third in the nation at 18.4 shots per game and the team will need this offensive intensity to contiue.

The Redhawks will be put to the test on the road this week as they face second in the WAC Utah Valley Oct. 18 and first in the WAC Air Force Oct. 20.

The Men’s Swimming team kicked off their season with a strong showing against Pacific Lutheran University. At the Redhawk center, Seattle U took down PLU with ease, scoring 146.5 to 39.5.

Seattle U dominated with first to third finishes in the butterfly, breaststroke, 50, 200, and 500 yard freestyle events.

The Seattle U Men’s Tennis took a short trip to the University of Washington Lloyd Nordstrom Tennis Center to participate in this year’s Intercollegiate Tennis Association (ITA) Northwest regionals.

Seattle U’s Colton Weeldreyer and Billy Jensen had greats wins against CSU Berkeley and the University of Washington. Seattle U’s Arshak Ghazaryan stated, “The squad did solid. Did not have disappointing losses but also did not have amazing wins. The team definitely looked better than the previous two tournaments, so I think we are headed in the right trajectory.”

Seattle U Men’s Tennis will return in the winter at Portland State Jan. 19.

As the Redhawks approach the WAC Championships later this October, the cross country team competed at the Bronco Invitational hosted by Santa Clara University this weekend.

Shortly after, sophomore Nathan Pixler and senior Cal Davidson- Turner finished with times of 25:00.4 and 25.15.5, respectively.

Overall, the men finished 14th with 362 points and women finished 22nd overall with 594 points. The Redhawks host the WAC Championships on Sat., Oct. 27 at Jefferson Park in Seattle.