Julius Achon: Running for the Lives of Others 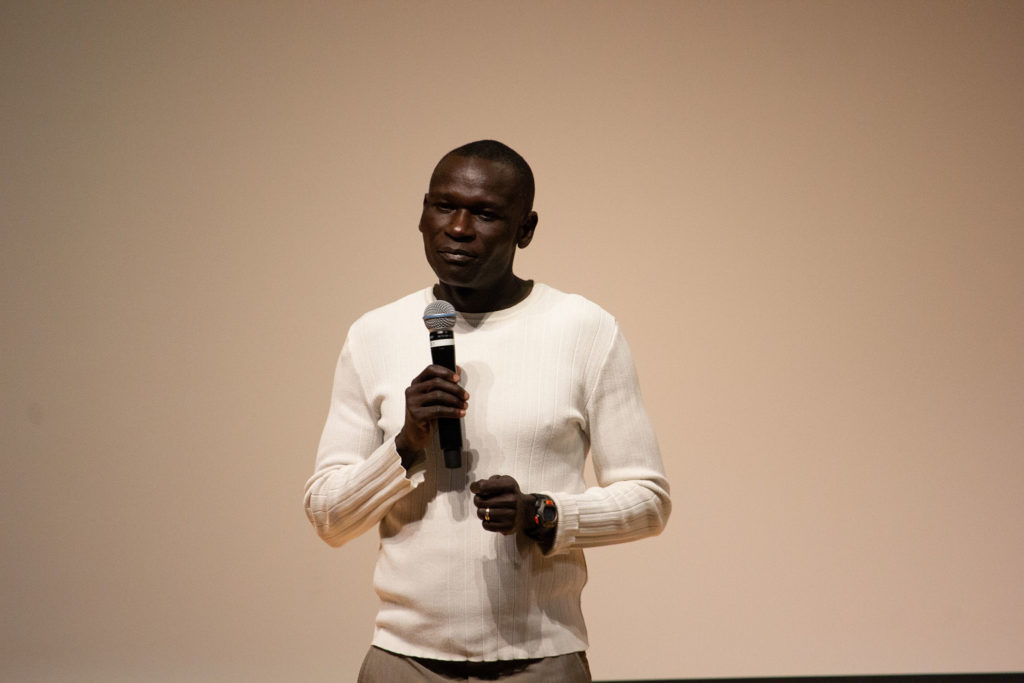 “I used to run for my life, but now I run for the lives of the people in my community.”

In 1989, a major measles outbreak swept across Uganda taking victim hundreds of children. At seven years old, Achon fell ill and was presumed dead. He was wrapped in linen and lined up next to dozens of other dead children prepared to be buried, when miraculously he sneezed. Achon sneezed a second time and was immediately unwrapped and taken home to be nursed back to health. The struggle and hardship for Achon had only just begun.

At age 12 Achon and 15 of his classmates were kidnaped from their home village of Awake in Uganda by a militant rebel group, the Lord Resistance Army (LRA), and taken 100 miles away to their training camp.

A year later, a government plane attacked the rebel camp, giving Achon and his friends a chance to escape. At some point during the fight, the plane mistook the escaping children for rebels and shot nine of Achon’s friends dead. Achon and six of his friends safely returned home.

Upon his return, Achon decided he wanted to go to school. Achon recalls, “Our school would not allow us to study because in Africa you must pay school fees and if you don’t pay you get chased out of school. I remember when I was chased from this school on Monday, I went to a different school on Tuesday.”

In 1989, at 13 years old, Achon was told if he ran track for a school, he would receive a scholarship to attend that school. “I just went to try my luck, then I found myself; I won the 800.”

His success at the district championships gave him a place at the national championships, where he won the 1500 meter in 4:09.52. He was then offered a scholarship to an elite government-aided school in Kampala, the capital city of Uganda, which Achon took.

His victory was followed by numerous scholarships from universities across the United States. Achon attended George Mason University where he won the 800 meter NCAA title in 1996 setting a new U.S. college record of 1:44.55. Later that year he ran the 1500 meter in the Atlanta Olympics and served as the captain of the Uganda Olympic team.

During his years living in the U.S., Achon didn’t talk about the violence consuming his home country; his uncle was killed, an aunt and her seven grandchildren were killed, and more and more young boys were being kidnapped and forced to fight for the LRA. Despite dealing with these traumatizing memories, and continuously wondering how he could help his family and his village, Achon continued to push through and run incredible races.

In 2000, Achon competed in his second Olympics at the Sydney Olympics where he reached the 1500 meter semifinals, but did not compete in the Athens Games after his mother was killed by the LRA.

Today, Achon is in his third year as an elected Ugandan Parliament official and serves as Minister representing his home district of Otuke County.

Achon co-founded the Achon Uganda Children’s Fund (AUCF). The non-profit aims to improve access to health care, clean water, and education. AUCF built a community health center in memory of his mother, in his home village, Awake, that treats residents suffering from Malaria and other illnesses.

After decades of war, hardship, sadness, and loss, Julius Achon has overcome many life challenges and adversity.

“Never give up in whatever you’re doing. There are good things that always happen for the parts that you may struggle. But success comes through the struggle.”

Now, at 41 years old, Achon still runs, but runs for enjoyment. “Of course I still run, but slower. I run to keep my body healthy. In running in sports, you are forced to win, now I don’t have to win to stay alive, I can enjoy it, and do it for others and not just for myself.”