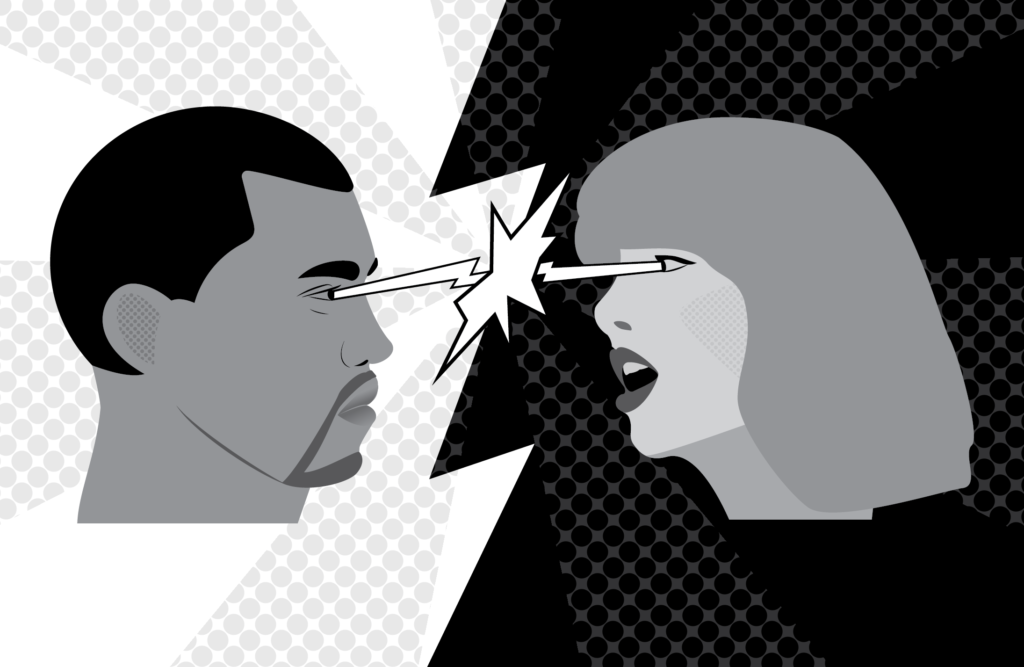 Remember in 2009 when Kanye West jumped on the VMA stage to interrupt Taylor Swift’s acceptance speech? Their names are both back in the news again, but for a vastly different reason—political orientation.

Taylor Swift has finally broken her silence on her political stance—and on Instagram, no less. She officially endorsed Democratic candidates in Tennessee to all 112 million of her followers. This comes as a shock, since Swift has been adamantly silent on her political views.

“I believe we all deserve in this country. I believe in the fight for LGBTQ rights, and that any form of discrimination based on sexual orientation or gender is WRONG. I believe that the systemic racism we still see in this country towards people of color is terrifying, sickening and prevalent,” Swift wrote in her Instagram post.

She continued to say that she would not be supporting Marsha Blackburn, a U.S. Representative in Tennessee for re-election, and would instead be voting for Phil Bresden and Jim Cooper.

When President Donald Trump was asked his opinion on the matter, he expressed his admiration of Blackburn and then took a stab at Swift, saying that she knows nothing about her representatives, including Blackburn .

Swift’s influence was seen almost immediately, as voter registration spiked following her Instagram post. According to Vote.org, over 166,000 people registered between last Sunday through Tuesday. 42 percent of those registrants were between the ages of 18-24, and Swift may be the one to take credit for that.

Though Swift’s endorsement of Democratic candidates did cause a rift within her large fan base, her political opinions did not become as big of a spectacle as Kanye West’s opinions.

Back in April 2018, West tweeted a picture of himself wearing a “Make America Great Again” hat that was signed by Donald Trump. This quickly caused disruption among his fans, a majority African American base.

“You don’t have to agree with Trump but the mob can’t make me not love him,” West said. “We are both dragon energy. He is my brother.”

Although West has deleted his Instagram account, his Twitter following did not incite any political action despite the expected outrage and jokes. It did not spark a correalating increase in voter registration as attributed to Swift. More recently, West was the musical guest on “Saturday Night Live” on Sep. 29. The cast reported that West went on a pro-Trump rant once the cameras were off-air. And yes, he was wearing his Make America Great hat.

“If someone inspires me and I connect with them, I don’t have to believe in all their policies,” West said.

What’s interesting is that Swift’s announcement has increased her likeability—perhaps even gaining her new fans—while West has been on a seemingly downwards spiral.

Many people stopped listening to West’s music as soon as they heard he supported Trump. Former fans such as Tori Moore, a second-year student studying business at Kapi’olani Community College, were shocked and questioned their support for West.

“As someone who has spoken up loudly about my distaste for Trump since 2015, I can’t describe how disappointing and hurtful it was to see one of my favorite artists supporting this man so passionately,” Moore said. “As for his music, I still listen to his old music, but I would never spend money on it or go to a concert.”

Pop singer Lana Del Rey had some things to say about West’s Trump-era political voice as well. She left a lengthy comment on his Instagram before it was deactivated.

The political climate in the United States has been tough to follow, but now that celebrities and public figures are coming out to support their candidates, it’s making it a little harder to follow—if not a little more entertaining.

Kanye West and Taylor Swift have had a long-standing rivalry, and it’s interesting to see that their political views contrast as well. West and Swift have yet to interact on the subject of their political orientations, but if they ever do, it is unlikely to be as iconic as West’s interruption during the VMA’s.