It’s Spooning Season: Artis the Spoonman at the Neptune 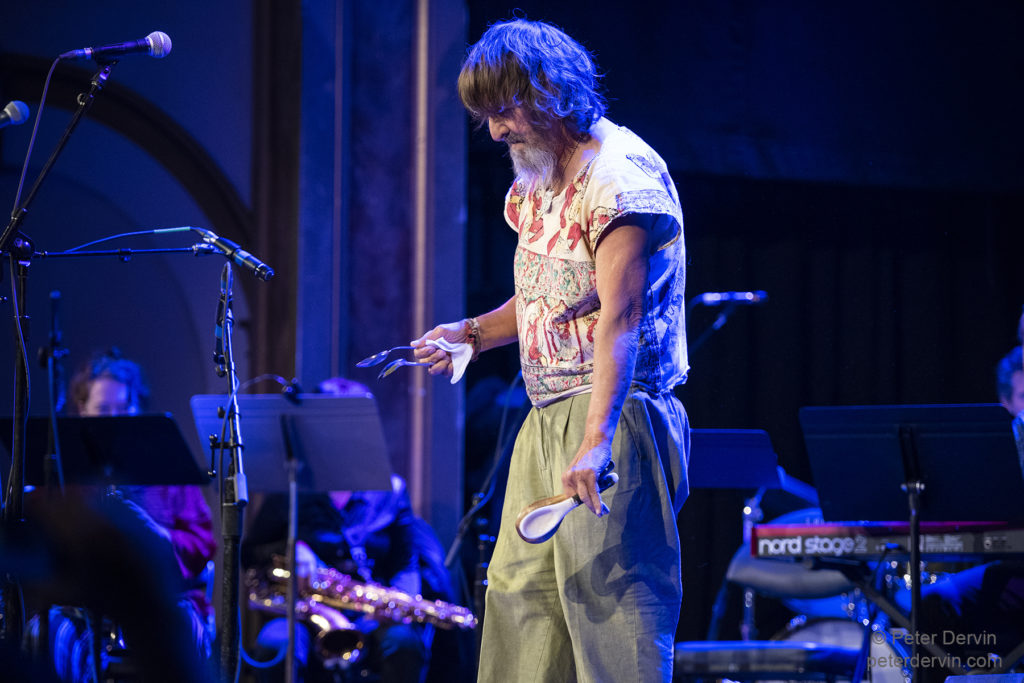 With a history as a street performer down in Pike Place market, Artis the Spoonman plays to a crowd at The Neptune to celebrate his first studio album and 70th birthday.

Contrary to popular belief, spoons are not just a helpful tool to transfer your cereal to your mouth. Spoons have the potential to be so much more. This week I was introduced to spoons in the form as an instrument and spoon culture as a whole.

Playing  spoons originated from the  ancient Egyptians, Greeks, and Romans. It is now an  art form enjoyed mainly by hipsters in the pacific northwest, but is also appreciated by people from all over the world. This unique instrument is usually accompanied by a fiddle or an accordion in the style of folk music.

What better way is there to learn about spoon culture than seeing a live performance? Artis the Spoonman performed at the Neptune Theatre for his 70th birthday and it was an incredible experience.

Although he is an artist local to Seattle, he has played on sidewalks and bars in many different countries around the world.

The festivities began with some of Artis’ closest friend drowning him in love, followed by unique, fantastical performances. Jason Webley, a folk musician and close friend of Artis, recounted  the story of how they met. Jason recalled how Artis was  drawn to him because of a particular line in one of his songs: “I want music that tears itself apart and takes the lot of you with it.”

Kate Copeland, another performer, wrote a touching song about Artis that warmed the hearts of everyone in the audience. She sang about how Artis would visit her family and play the spoons for her and her sister. She described Artis as caring, selfless, and a genius among many other amazing qualities.

As soon as Artis stepped on stage, the crowd was lively and the venue soon felt like home. The spoons act as percussion and add a magical touch to each song. Aside from the music, his ability to hit spoons all over his body to create a beat is a mesmerizing feat to witness.

Artis  also performed a sort of one man show where he played his current self, as well as his former self when he was in the US Navy. In it, he screamed at his former self for indulging in the war. These performances were touching, funny, and revealed the many
layers of Artis the  Spoonman.

Arguably the best part of the night happened when his friends brought him out a giant, spoon-shaped, birthday cake. This  was the final touch that made  me fall in love with this community. Cake was handed out to the crowd and was, much to everyone’s delight, very delicious.

By the end of the show, it had truly become a night to remember.

Even if one is not familiar with spoon music, it is regardless something that you should not miss the opportunity to see. The tight-knit, family atmosphere of the performance is surely something that all are bound to enjoy. Hats off to Artis for a once in a lifetime experience.