The Showbox: The Heart of Seattle’s Music Scene 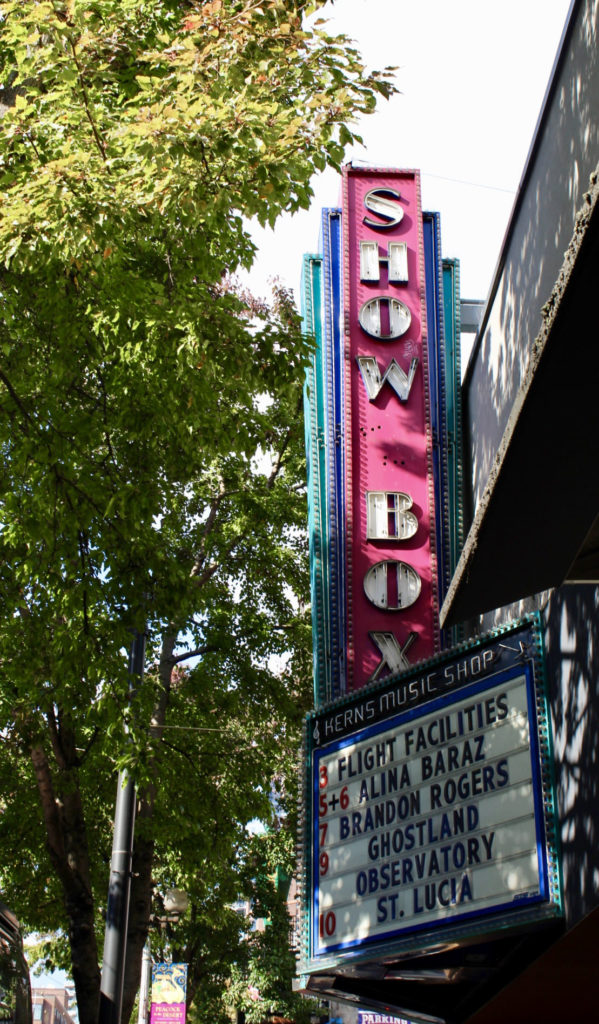 The Showbox has hosted Seattle’s music scene for nearly 80 years.

Tucked across the street from the iconic Pike Place Market sign, the Showbox teeters on an uncertain future.

“The Showbox is a symbol of the city and its current culture as well as a venue that’s inspired artists throughout important times in music history, from Duke Ellington to Pearl Jam,” said Misha Dumois, an employee at the Showbox. Upon hearing about the purchase of the Showbox land by the Onni Group, a Canadian real estate company, Dumois used her photography skills to launch the “Save The Showbox Portrait Project.”

Utilizing her years of professional photography experience, during which she covered a broad array of subjects from Seattle’s food scene to freelance portraits, Dumois took photos of various Showbox fans holding signs bearing quotes about what the Showbox means to them.

The Showbox has represented the Seattle music scene for nearly 80 years, highlighting artists from every possible genre from punk rock to modern pop. Amongst the historic lineup is Muddy Waters, the Ramones, and Billie Ellish, who is performing at the Showbox at the end of October.

“(The Showbox is) a symbol of enjoyment for the masses and a symbol of Seattle’s unique music scene. It’s living, breathing, thriving history,” Dumois said.

Generations of music lovers have seen the venue change names and purposes several times since its humble beginnings in 1917, where it launched as a ballroom and then a grocery store before being bought by a local music aficionado in 1939.

During the Jazz age, when the theater was lauded as the “Palace of the Pacific,” artists such as Louis Armstrong and Sammy Davis Jr. performed at the theater. In 1962, the Showbox suffered through a stint as a furniture showroom for a little less than five years until it returned to music and daylighted as the “ Happening Teenage Nite Club” for a year.

It was not until 1985 when the spot closed for five years before waving in a new era of performance that the venue had never seen before: comedy. The new name for the building was the “Seattle Improv Comedy Club,” which hosted renowned comedians such as Ellen Degeneres and Dennis Miller.

In 1996 the area changed owners and names, taking on the title “Showbox Music Club,” where it became shadows of what we know today. Modern singers, such as Lady Gaga and Katy Perry, began to perform at the venue before it returned to its more indie roots.

Four years ago the venue celebrated its 75th birthday, which was celebrated with the decision to return to the name “Showbox.”

“We live in a society in which commercial value seems to be preeminent. But there is also historical value… we forget that. It’s hard to quantify. If it does have historical value, it should count for something,” said Dan Dombrowski, a professor of philosophy at Seattle University.

On July 25, 2018, the Showbox made headlines yet again. This time, however, the news illustrated a much bleaker future: the area had been bought by the Onni Group, who already had plans in the making for destroying the Showbox building and replacing its history with a new high rise.

Seattleites and prominent artists alike took up arms against this decision and created their own kind of noise: the songs of resistance that echoed throughout the city. The City Council, led by Council Member Kshama Sawant, voted unanimously to temporarily extend the Pike Place Historic District to include the Showbox venue for 10 months. During this time the City Council will look over the historic significance of the Showbox and decide what their next step, either to save or to forsake the venue, should be.

“My first Seattle concert was at the Showbox,” said Sophia Lopez, the 10 to 11 a.m. DJ for KXSU. “I went to see Kali Uchis which was really nice because I loved to see her in Los Angeles so it was really nice to be able to do the same thing here.”

These conflicts have left supporters of the Showbox confused about the fate of their beloved music venue, historic monument, and home.

“It represents taking something that brings joy to thousands of everyday Seattleites and replacing it with something that makes one person very rich and caters to a select group of rich people who can afford to live there and lord over the Pike Place Market,” Dumois said.