Sure Sure Expands Fanbase on Tour with Hippo Campus 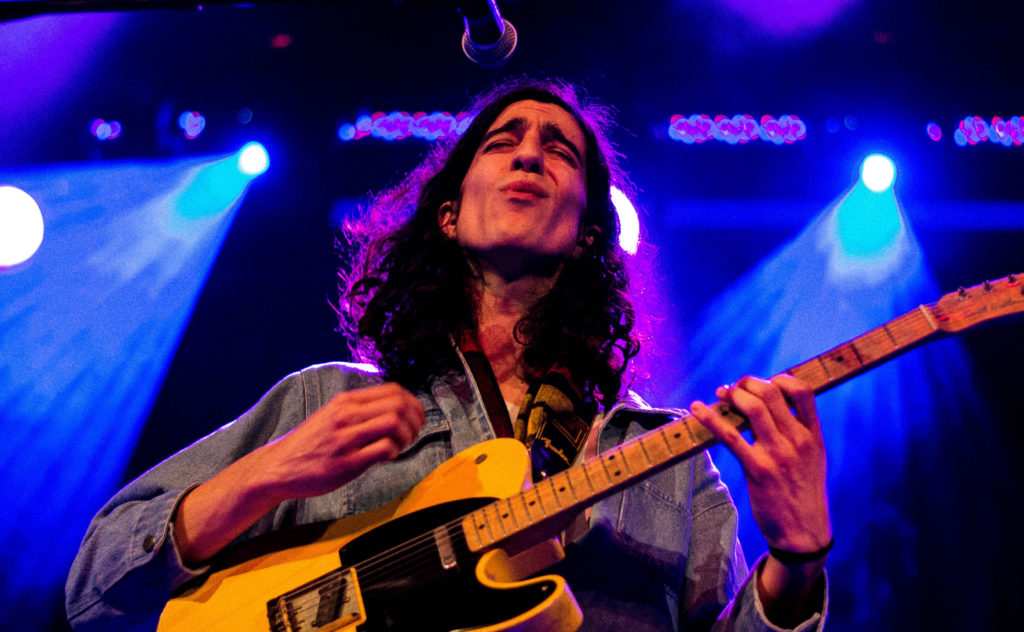 A crowd of hundreds buzzed with energy last Friday at the Neptune Theatre as they waited anxiously for Hippo Campus, an indie rock band being praised by publications like Rolling Stone, NPR and BBC. Their release tour last year sold out completely, and this year’s tour has just begun, checking off Seattle as the third stop on their roadmap.

From the second floor seated area to the large pit directly in front of the stage, the theatre, which holds a capacity of 800, was swarming with young people.

For opening band, Sure Sure, who had never played for crowds larger than 300, the packed theatre was a definite change of pace. Relative newcomers to the scene, the four members of Sure Sure said that they had also never gigged outside of California before this debut national tour.

Charlie Glick (guitar), Chris Beachy (keys), Mike Coleman (producer) and Kevin Farzad (drums) spend their creative time in their bright yellow studio in Los Angeles, Calif. is sunny space is where they record most of their music, and the color has become signature to the band. The “rubber duck” yellow is even featured in their cover photo on Spotify.

Charlie Glick, guitarist and singer of Sure Sure, performing at the Neptune Theatre

Sure Sure focuses on a collaborative music writing style, and the band said that music and melody usually coming rst. Farzad makes up beats on his computer that have sometimes become the start of hit songs like “Hands Up Heads Down”.

“I did it shittily in my apartment bedroom,” Farzad said about the drum beat in the song.”

The four guys from this beach pop band remember some awful early gigs, like one where there was only a curtain separating their show from a loud neighboring show. A punk venue in downtown Los Angeles called The Smell and other local dive bars were the types of venues the guys from Sure Sure were accustomed to before last week.

“The early shows, man. It can be rough,” Farzad said
Sure Sure was relatively undiscovered until their single “New Biome” got them a following on Spotify.

“Finding a fan base is super hard,” Coleman said. “It all kind of happened at once”.

They remembered the feeling they shared during a show this past July where people were singing along to the words and at end of the night, they discovered they’d sold out. Their success only rose when Hippo Campus, reached out to Sure Sure to ask them to open for them during this winter tour.

“The Hippo tour kind of fell into our laps,” Farzad said. “Nathan dug it and props do them for finding a band they liked and thinking of a way to support us by bringing us on tour.”

THe guys are road tripping in a van for the tour, spending all their time in that small space together for 37 days. Loading all of their gear and merchandise onto the van wasn’t easy living but they’re staying positive.

“We got on and we were able to ‘tetris’ it all in there,” Farzad said.

Glick and Beachy went to Stanford together. They had enough success that Coleman had heard their music and knew them as the best local band. It wasn’t until after their graduation years later that Sure Sure formed.

Originally wanting to call themselves JR, they had to adapt after the band Dale Earnhardt Jr. Jr. changed their name to JR JR. It was too similar, so they changed theirs to Sure Sure.

“We try to make stuff that sounds fresh to us,” Glick said.

“Before we dive into a new batch of recordings we try to think ‘How is this going to be different? What are the things that are going to make this a distinct body of work?’” Coleman said.

“Some of our songs take you on more of a journey and are more intricately arranged and then other ones are more raw energy and less thought out,” Beachy said.

Glick and Beachy are English and math tutors respectively outside of touring. Farzad teaches an afterschool drum program to 7 year olds and he also has a twitter joke account that has gained a following of 84.6 thousand people.

Having put those jobs aside for now to pursue this passion, the guys of Sure Sure are excited to see parts of the country they never have before and get paid to do what they love.

“I think we all woke up today thinking ‘I want to play!’” Farzad said. Farzad and Glick hopped on stage at the Neptune with striped socks on their feet, they played songs off their new album for the loud crowd. They got everyone doing the dance move to their song “Hands Up Heads Down” which resulted in a loose bouncing of hundreds of arms high up in the air.

By the time Hippo Campus got on stage, the crowd was hyped up and yelling for them.

Hippo Campus’s indie rock sound is catchy and original. Their creative talents have been noticed by some big names in the business, and for good reason. They have found their sound that is distinctive and appealing. With a variety from more bass heavy dance songs like their hit “Way It Goes” to lighter more playful songs like “Buttercup” they explored indie, rock and pop with their musical variety.

Sure Sure and Hippo Campus continued onto Portland after their night at the Neptune and are now in California before heading East. Sure Sure posted their phone number online so that along the tour, anyone can call and chat with them while they’re on the road.

Sure Sure will be back in Seattle on April 5 at Columbia City Theatre. Tickets are available online.