Men’s Soccer Season Ends in Second Round of NCAA Tournament 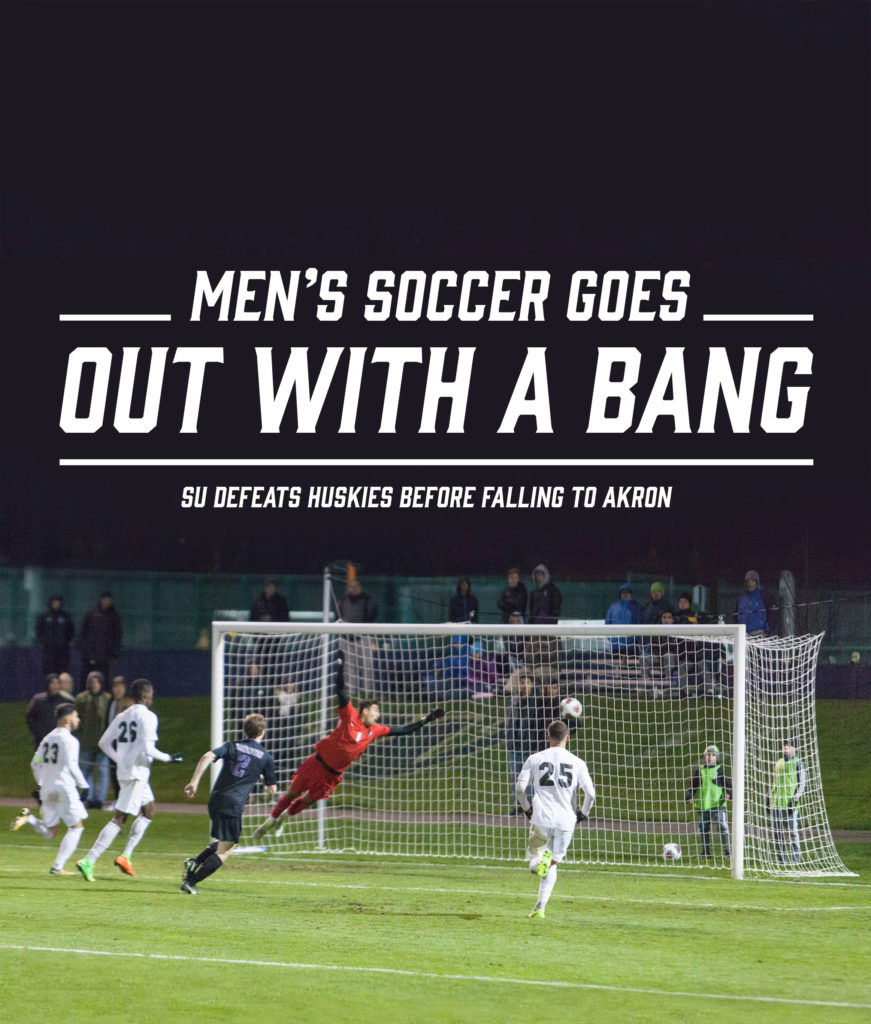 PHOTO BY CAM PETERS, DESIGN BY CONNOR MERRION AND SAM SCHULTHEIS AND JOSH MERCHANT • THE SPECTATOR

Following an emotional win against the No. 26 University of Washington in the first round of the NCAA tournament, No. 22 Seattle University Men’s Soccer team ended their season with a 3-0 loss to No. 5 Akron.

The team concluded their successful run with a 15-4-4 record, the WAC Championship title, and an overtime win against rival school UW that took them to the second round of the NCAA tournament. NCAA play began on Nov. 16 as Seattle U traveled to Husky Stadium to face UW (12-7-1). It could hardly be called an away game, as the stands were filled with red and black.

“That was the game that we did for our school. They beat us at home, that was a chance for us to perform and we did,” freshman Ivory Randle IV said. “People stepped up into really big roles and the people who stepped up needed to step up. It showed that we had improved in the season.” 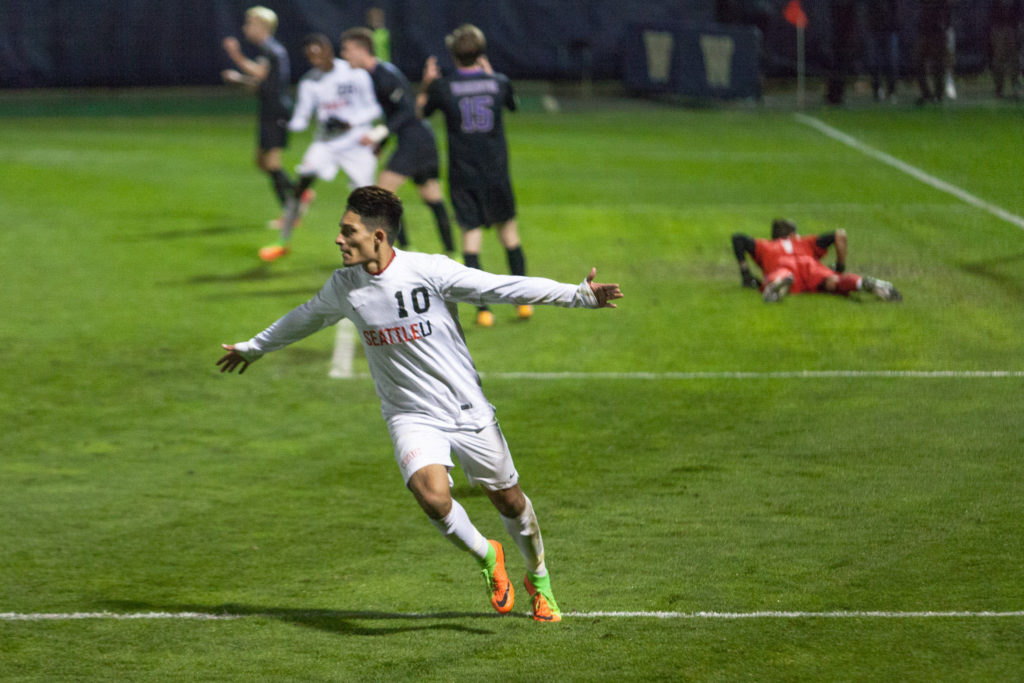 Sergio Rivas celebrates after scoring the second goal of the game.

A goal in the 24th minute gave the Huskies an early lead, but Seattle U countered before the end of the half. A through ball to Habib Barry allowed the Redhawks to even up the score in the 38th minute.

Both teams worked to give themselves the lead, but it was Seattle who would find the back of the net first. Senior Medo Youssef came off the bench early in the second half, and was able to find junior Sergio Rivas running up the right side. Rivas executed a shot outside of the box and put the Redhawks up 2-1.

Things seemed to be coming together for Seattle, but the Huskies managed to even the match in the 80th minute, ultimately sending the game into overtime. Near the end of the first overtime period, Senior captain Alex Roldan was left with space in the middle of the field, and used it to find freshman Gabriel Ruiz on the left side. Ruiz curled a beautiful shot into the top right side of the net from 15 yards out, ending the game and causing the fans to rush the field.

Head coach Pete Fewing couldn’t have been more pleased with the team’s efforts throughout the season. “Beating Washington was another notch in our belt,” he said. Seattle hosted Washington earlier in the season, but didn’t come out as satisfied. The Huskies snapped the Redhawks’ 21-game home winning streak, which had been the longest in Division I men’s soccer at the time.

The turnaround was quick, as Seattle U was set to play Akron (18-3-1) on Sunday, the 22. Akron maintained control of the first half and put away an early goal in the sixth minute. The Redhawks went into half just down the one goal, and would play with the wind to their advantage in the second half.

“It was very windy so we were pinned in our end between their really good defending—you’ve got to give them their credit,” Fewing said. “With the wind, we couldn’t really get it out of the back, so I wasn’t disappointed to be down 1-0 at halftime, because we were down 1-0 against UW and came back.” 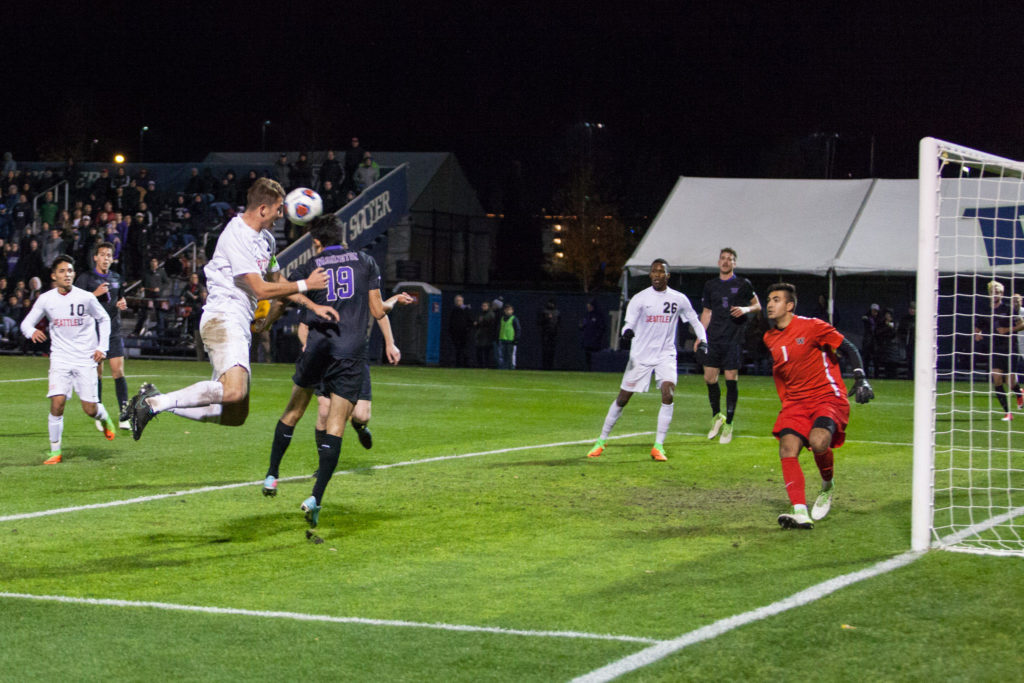 Nathan Aune goes in for a header.

Seattle U came out stronger in the second half and were able to create several opportunities. Roldan and senior Nick Prasad both had shots on frame, but neither could convert.

“Second half, we played much better, we created some chances, but then again they were very talented,” Fewing said. “We changed, we went to three defenders instead of four because we needed a goal, and they punished us. They had two goals late, and my hats off to them.” Akron scored in the 73rd minute and added another in the 88th minute to close the game out 3-0.

Since 2013, Seattle U has had three NCAA tournament appearances, and has won a single game each time. Over the last five years, there have only been three teams in men’s Division I soccer that have had at least an 11-win season. Seattle is one of them, alongside Akron and Clemson.

“The program has been growing and we’ve really felt the support of the school and the support of the athletics department and the soccer community this year,” Fewing said. “It just feels a little different than past years. And we’ve been Division I for a while now, but I think we are as legitimate Division I as we’ve ever been.”

“This season has set us up for so much success in the future and it’s a building block that next season will work on,” Randle said, “and we’ve set a standard this year that every single year after this has to meet.”

The tournament is down to the quarter-finals. On Dec. 1, Akron will take on No. 4 Louisville and No. 7 Michigan St. will face No. 2 Indiana. The following day, No. 1 Wake Forest will challenge 2016 champion and No. 9 Stanford, while Fordham—who has caused two upsets to make it this far—will play No. 3 North Carolina.