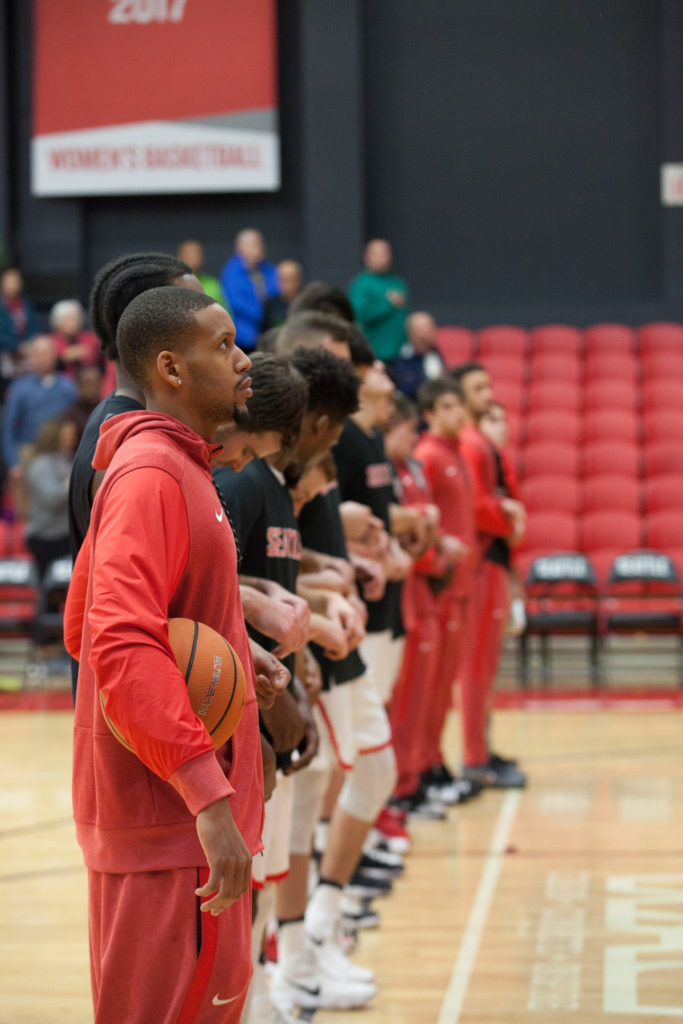 The team linked arms during the National Anthem.

Seattle University Men’s Basketball squared off against Puget Sound University at the Connolly Complex on Sunday, where they routed the Loggers 121-70. The Redhawks broke Seattle U’s division one record for most points scored in a game.

The Redhawks got off to a rocky start Friday, when they lost to Saint Louis 62-46. The team was determined to make amends for their previous mistakes.

“We knew from our game on Friday that we had to make a response to what happened,” guard Richaud Gittens said. “We didn’t play our best basketball, we didn’t help our team succeed on Friday, we just wanted to come out and play better.”

Before tip-off, the team made a statement by standing together with linked arms during the national anthem, wearing shirts that read “Injustice anywhere is a threat to justice everywhere” a quote by Martin Luther King Jr.

“We wanted to make a statement because obviously things aren’t right in this world and things aren’t getting better as they should be,” Gittens said. “So we wanted to raise awareness as a team, and we felt like we did that with locking our arms and our quote on the back of our shirts, and as a team we all felt good about it.”

The team started off strong with a lead of 67 to 30 at halftime. Puget Sound played physically against the Redhawks, committing many fouls throughout the first half. Seattle U worked through the pressure and came out on top, scoring easily and using free throws to their advantage.

“I expected us to out rebound our opponent tonight, but we got beat up on the boards the other night so for the guys to bring a better middle effort to that was outstanding,” coach Jim Hayford said. “We doubled them up on the boards as we should have, so I thought we got better there.”

In the second half, Puget Sound tightened up on defense, causing the Redhawks to struggle to make baskets. The pressure Seattle U faced will be used to help the team improve on offense.

“I think this will give us some good film because of the pressure that was applied,” Hayford said. “We can coach guys on decision making because the chaos that UPS’s system created puts you in a position that makes you become a good decision maker, and we made obviously a lot of good moves, but we also made a lot of bad ones and we get better from that learning process.”

With the team now at 1-1, they are hopeful that they can carry Sunday’s success through the rest of the season.