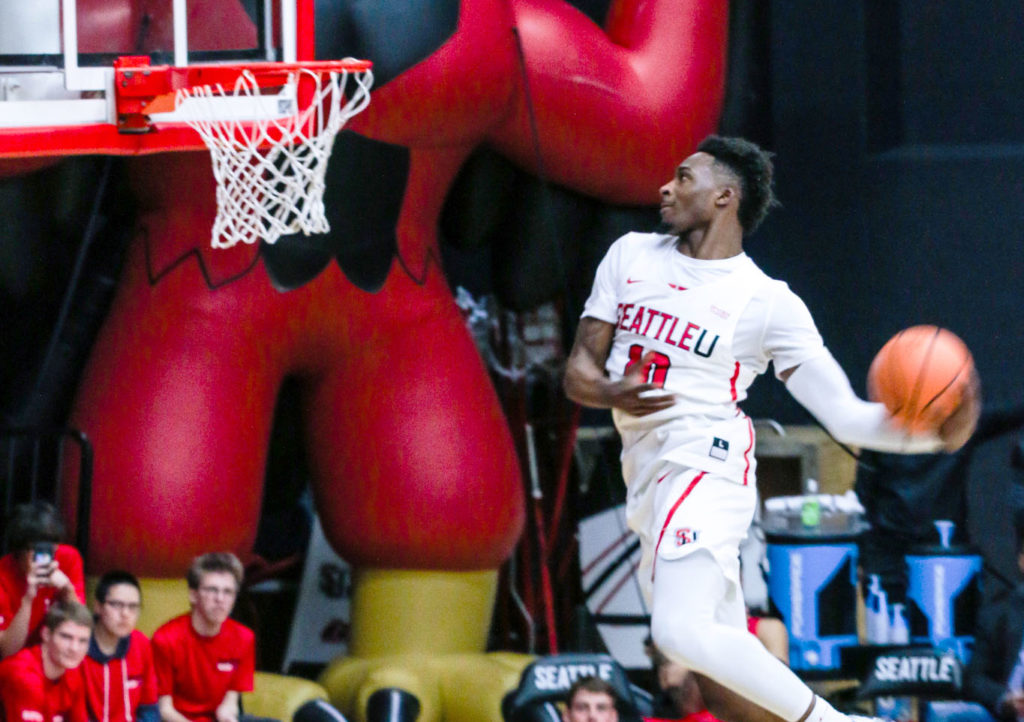 Kicking off the countdown to basketball season on Oct. 19, RedZone and UREC hosted the annual student event, Redhawk Madness at the Connolly Center. Over 400 students attended the traditional event which featured performances from the Seattle U Redhawk band and the Seattle U dance team. Throughout the night, students showed off their school spirit, met this season’s men’s and women’s basketball teams and won prizes and giveaways. 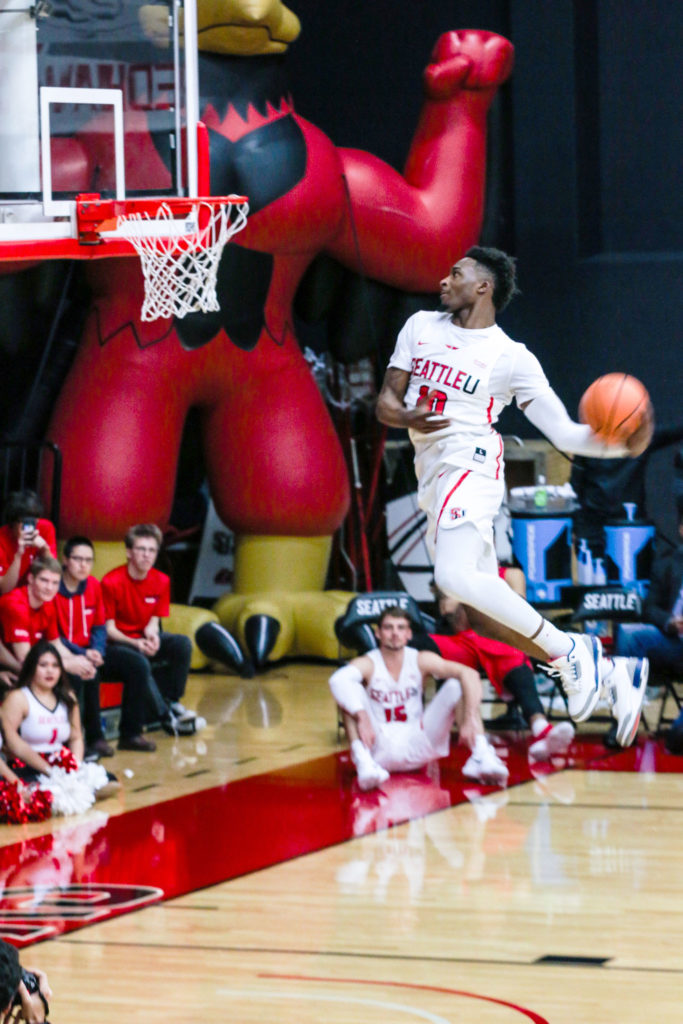 The night started with a tunnel run, where the women’s team ran out high-fiving their teammates to show their enthusiasm for the upcoming season. The men’s team came out with their phones to document the event and their favorite dance moves. Scott Ulaneo, a returning sophomore forward from Rome, Italy, added to his moment as he ran out waving a full-sized Italian flag.

The crowd became well-acquainted with the basketball players through a revealing game of “Never Have I Ever” where students learned which players have peed in public and which players have worn dirty underwear because they were too lazy to do a load of laundry. After sharing secrets, the men’s team demonstrated their skills and played a 10-minute scrimmage.

The event continued as the court shifted into a dance floor when the women’s team joined the men’s team for a dance battle. The men’s team came together and showcased their best moves. The women’s team responded quickly, putting forth their best dancers and even pulled students from the crowd to join their team. Eventually, more and more students began getting called up, turning the dance battle into a huge dance party where everyone came together on the court.

As the music faded out, the crowd retreated back into the stands and the men’s team lined up for their final event of the night, the slam dunk competition. For their finale, they did everything from running start dunks to dunking over three students.

The high energy both teams had during Redhawk Madness reflected the teams’ energy going into preseason.

Jacinta Beckley, one of the senior captains, stated that the women’s team this year is a really new, really young team. They have a lot of potential so they’ll grow throughout the season.

“The potential is there, it’s just whether or not we can come together as a solidified unit, stay healthy, and play at the level we’re capable of playing at,” she said. “People are thinking of us differently, we want to create more momentum going into the conference.”

The women’s team has faced quite a few challenges already. Barcomb has acknowledged this. “We are ahead of the game, we’ve had a difficult Fall, we’ve had some injuries, so we just need to get healthy, as healthy as we can be and stay that way so that someone isn’t missing and falling further behind,” she said. 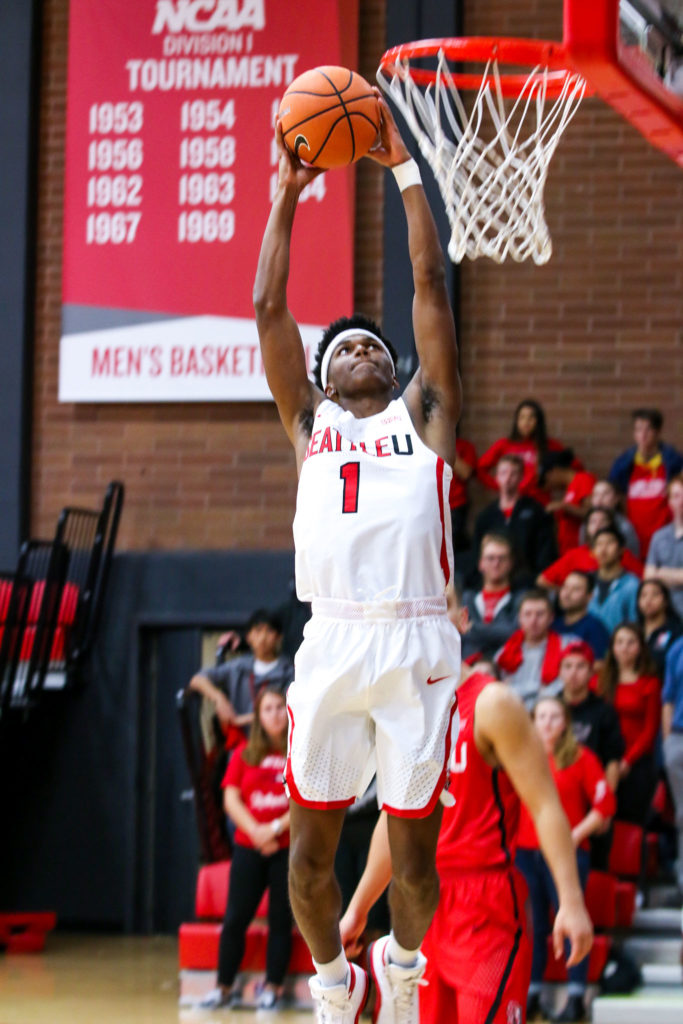 Sophomore Morgan Means dunks in front of a crowd.

The team graduated six seniors last year, changing the dynamic of the team.

“Our team is completely different. We have six new players this year, eight returners, and of the eight returners only four had significant minutes, so it is like working with a brand-new team. We’re going to be teaching rookies a lot of subtle nuances and what it means to be competing at a collegiate division one level,” Barcomb said. “It’s just all new…the sooner we can get the freshmen contributing, the better off we’re going to be. It’s all about building the confidence level of the rookie class, making them feel at home.”

In order to overcome their challenges and to help lead her team to be in a position to win this season, Beckley plans on helping every player know what their role is on the team and making sure they know what they’re supposed to be doing on and off the court. She hopes to be a vocal leader and encourage everyone, as well as remain positive.

Jordan Hill is a graduate captain for the men’s team this year.

“We look really good, we’ve got some things to brush up but it should be a good season. I think we’re on the right track and we’re hoping for good things,” he said.

Morgan Means, sophomore captain, stated, “We’re a different team this year. We’re much more athletic and we’re well coached. We’re going to be much more fast paced, and exciting to watch. It should be fun.”

Their biggest challengers this year are University of Washington, CSU Bakersfield, Saint Mary’s College, and New Mexico State University. The captains intend on building their team’s chemistry, getting to know each other better, and getting used to the system in order to prepare for those games.

Hill also plans on drawing upon his experience of playing college basketball for the last four years at Wisconsin.

“I hope to take those experiences and help translate what I’ve learned to the rest of my teammates, make sure that everybody is in the right position at the right time, and keep everyone positive and focused on the same goal,” he said.

Both teams are ready for the season to start and if they keep up their energy from Redhawk Madness, they will have the potential to maintain their standing from last year in the WAC and even surpass it.