Flotation Tanks on the Rise for Stress Relief

As I gingerly dipped a toe into the warm water of the pod shaped flotation tank, I thought of the scene from “Stranger Things,” where a small bald girl named Eleven climbs into a homemade flotation chamber assembled on the floor of the Hawkins Middle School gym. In the scene, Eleven floats in salt water to venture into the demonic dimension of the Upside Down, whereas I went into my sensory deprivation float just hoping to feel a little less anxious.

Floating in an An i-sopod floatation tank. This model starts at $25,500.

Flotation tanks have been around since the mid 1950’s, but have recently become mainstream. With the state of the local and national climate, it is not surprising to learn that Seattleites are experimenting with this form of self-care. What could be a more sensical form of self-care than to climb into a small chambers and limit all senses for an hour?

“We have a variety of people who use it, and I can say that actually our client base has been changing over the past couple years,” Gabe Goldberg, Vice President of Marketing at Urban Float said.

Urban Float said that its new Capitol Hill location will most likely open during the first week of November. The new location is directly across from campus on the corner of E Madison St. and 12th Avenue. Urban Float already has established locations in Fremont, Renton, and Kirkland.

While flotation tanks have increased in popularity, the science has remained the same: place a person in a hyper-saturated mixture of magnesium sulfate and warm water and limit exposure to light and sound. The individual in the tank experiences a feeling of weightlessness and the boundary between the skin and the water disappears.

By limiting what the body can sense, the participant is left with only their thoughts to contemplate. An individual feels bodiless: a brain without bounds.

“We have so much external stimuli coming at us all day, but when you take one hour in utter silence with nothing coming in your eyes, you start to see things going on inside of yourself. When you are in that much silence, things can’t hide because you have nothing else to focus on,” Seattle University’s Graduate Assistant Strength and Conditioning Coach Colton Kaiser said.

In a study conducted in the early 1970s, Psychology professor Peter Suedfeld found that the benefits of floating ranged from relaxation to pain relief. Professional athletes like Tom Brady of the New England Patriots, Stephen Curry from the Golden State Warriors and Olympic triple jump competitor Phillips Idowu all implement floatation therapy in their training regimen. However, it is by no means an inexpensive way to destress. Depending on the business, a first float can cost between $30 and $45 for a 60 minute session. 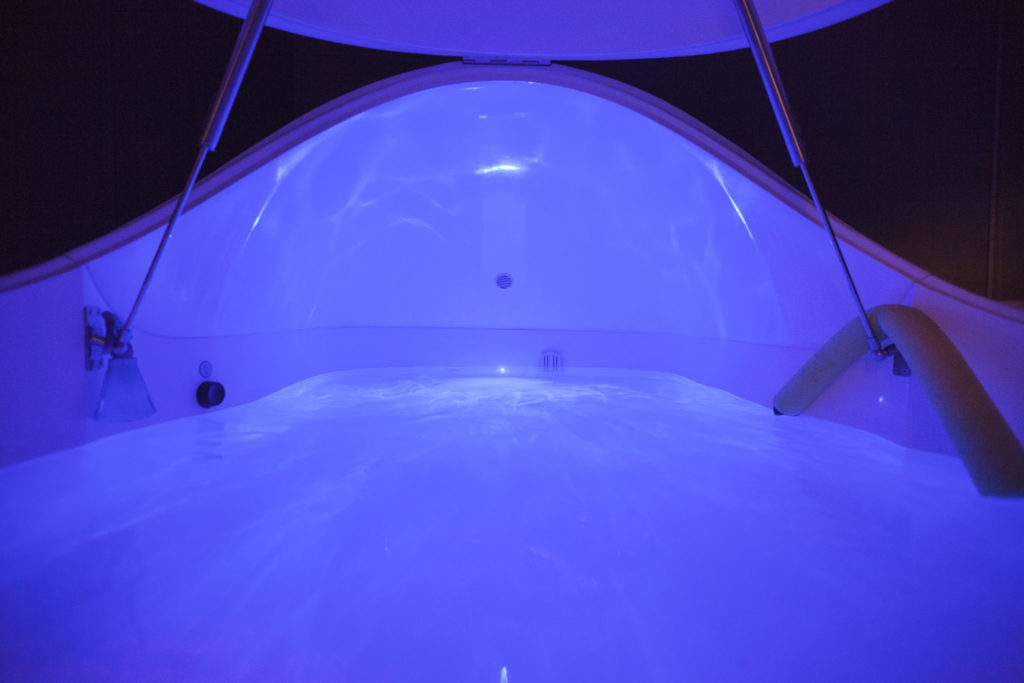 An i-sopod floatation tank with the lid open.

Life-coach and float-enthusiast John Bodine only floated once before deciding to have a tank installed in his house.

“For me, there are three types of floats. The first is just like a deep meditation. That is just being aware but without the noise and the dialog that goes on in the head. The second for creativity; I set a seed thought before I go in. This also includes interpersonal relationships and problem solving,” Bodine said. “The third kind of float is where you go in and need to shut down. It’s like sleep, but it’s not sleep. It’s often similar to the state when you are waking up in the morning and you know that the world is there, and you hear a bird or a sound outside but you’re also still in your dream state.”

As I lay in the tank, I yearned for Bodine “shut down” float. I quickly found that the physical act of floating was easy, aided by the 1200 pounds of salt dissolved in the water. However, my mind was uncooperative. I began thinking about the cost-per-minute of this fancy bath. I attempted to focus on my breathing but found my mind wandering to contemplate the rest of my day.

Impulsively, I reached to scratch my nose. This was a bad idea. My foot hit the bottom of the tank, then my hand and then my other foot. I felt as if I was in the slowest game of pong, and I was the ball.

Frustrated and unrelaxed, I repositioned my arms and tried again to let my mind wander freely. Surprisingly, this adjustment was exactly what I needed. Shortly after, I reached a state that was dream-like but not fully unconscious. I remained in that state until my sixty minutes were over. Stepping out of the tank, I felt completely refreshed. It was as if I had just woken up after a full night of rest.

In a world of many stressors, there are many techniques to practice self care. Difficult classes, soaring rent costs and social pressure are amid a range tof factors that may drive college students to binge drink or stress eat. A lengthy float might be a beneficial alternative to these unhealthy coping habits. If students are willing to skip a few nights at the bars or pass on a few dozen bags of chips, they might be able to “pool” their funds and schedule a float.

Cam may be reached at
[email protected]