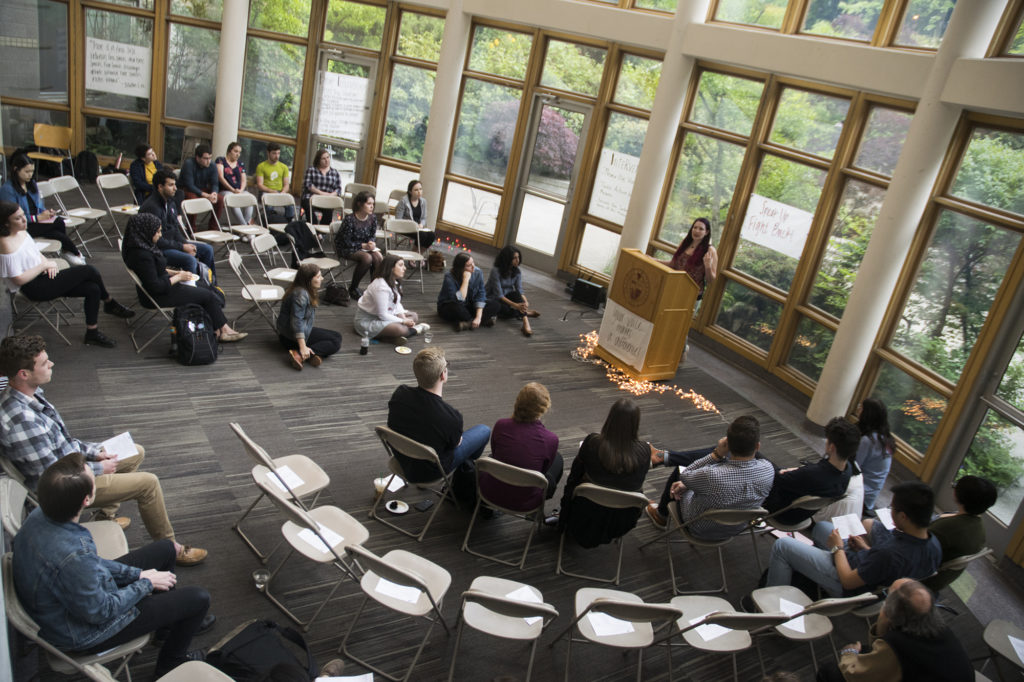 Everyone encounters words they remember far beyond the day they were spoken. Some find them in a keynote speech or a conversation with a loved one, but they also come from much less benign sources. Many people in our country encounter these words unexpectedly and without warning in the form of slurs, labels and derogatory jokes; they encounter these words in the form of hate speech.

Students at the “Fuck Hate Speech” event recounted their experiences with hate speech while others listened to their stories.

Whether online or in-person, from a stranger or someone we know, hate speech has many repercussions and it negatively influences the dynamic of our society. What qualifies as hate speech, and how to address it, makes the work of movements like Speak Up, Fight Back all the more important.

Speak Up, Fight Back is a student- run, anti-hate speech movement founded by senior communications major Areesa Somani. Her inspiration for the project came from hate speech research she conducted with Dr. Caitlin Carlson of the Seattle University Communication department.

The movement is open to students of all disciplines and supports values of empathy, social responsibility and active participation. Speak Up, Fight Back equips students with strategies to confront instances of hate speech they come across and educate peers on the subject as well.

“As a strategic communication major, I think it’s great that students are able to apply the skills they learn in classes to real life campaigns,” said Angelica Rivera, third year strategic communications major. “This campaign is effective because it addresses relevant and important issues in our society today. It encourages students to talk about and validate their experiences.”

The value and positive impact of Speak Up, Fight Back was well represented in the movement’s first campus-wide event: Fuck Hate Speech. The program, held last Wednesday, consisted of two segments meant to serve the dual purpose of educating, while also driving audience interaction.

The first half of the event centered on student accounts of their experiences with hate speech, as well as their insights of how we can combat it. This portion featured several prominent student leaders and engaged with subjects such as racism, Islamophobia, homophobia, biphobia, ableism and the dismissal of victims of abuse.

“The whole point of having people share their experience with discrimination and hate was to really get it out of that academic space and help folks understand that it’s a real problem that affects real people,” Somani said.

The second half of the event allowed audience members to form groups and talk about hate speech in a more personal setting. These discussion groups opened the floor for others to also contribute their experiences, as well as insights, questions and their own techniques for combating hate speech.

Fuck Hate Speech covered a variety of different subjects, such as the roots of hate speech and how it stems from seemingly inoffensive language; however, the most emphasized topic was bystander intervention.

Bystander intervention, or in other words, the way you react to hate speech around you, was stressed as the most effective way of both preventing hate speech and containing its effect.

Though it is commonly defined in terms of confrontation, the presenters explained that it also takes other forms like comforting victims and ensuring their well-being. Though each situation is different and requires a different approach, the one constant is that a bystander must act and cannot be passive in the presence of hate speech.

Kayla Todd, a co-founder of the Survivor Support Network and one of the speakers at the event, said that she has experienced hate speech as a woman, queer individual and as a survivor of sexual violence.

“If just one person witnessing each of the situations in which I was a victim of hate speech had intervened, it would have made a world of difference to me,” Todd said. “At the same time, I have also witnessed hate speech and not always acted when I should have, and that is why I chose to participate in this event with Speak Up Fight Back. At the event, I pledged to hold myself accountable to action and to not be silently complicit it situations of hate speech.”

Speak Up, Fight Back plans to follow their event with more programs in the next academic year and is open to prospective new members. To get in contact with and receive updates on the movement, visit their Facebook page at facebook.com/speakupfightbacksu/.