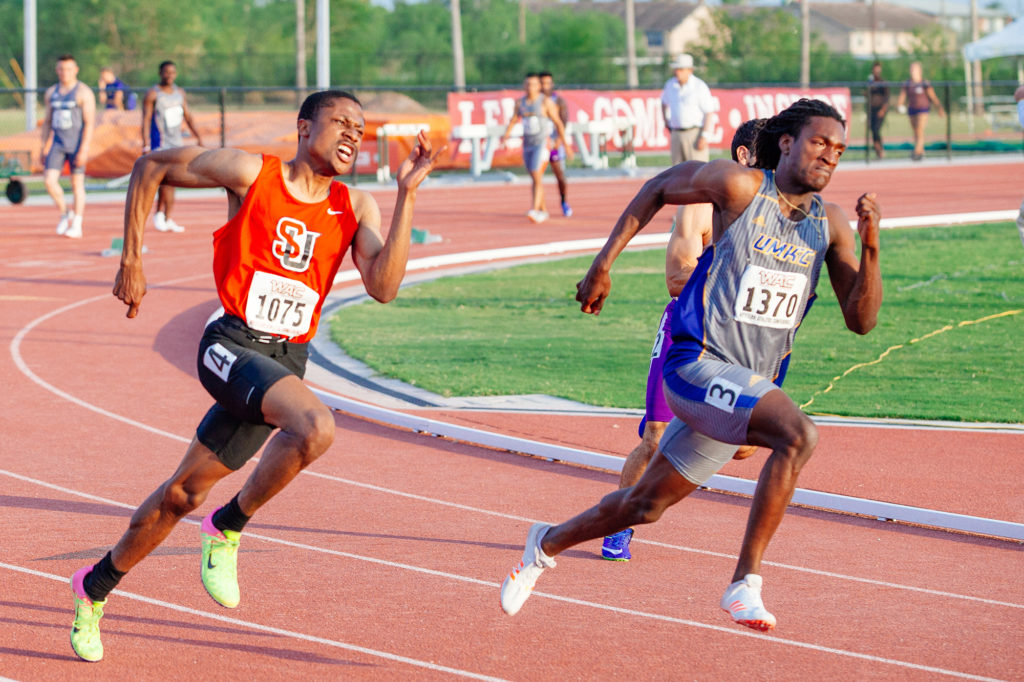 Keith Beasley battles an opponent from UMKC in the men's 200m dash.

Seattle University Track and Field traveled down to Edinburgh, Texas to compete in the Western Athletic Conference Outdoor Track and Field Championships. Four days of competition resulted in eight medals and multiple school and personal records.

“Setting all my goals, accomplishing them and feeling like all my hard work has paid off is hard to put into words,” Maddux said. “Having to come back after I won the heptathlon and compete some more, I kind of had to remind myself to remain calm because I wasn’t done yet.”

“Mandie Maddux had a stellar meet,” Pharis said. “In each of the 7seven events of the Heptathlon, she either set a Personal Best or a Season Best. That is always the goal, but is rarely what happen in the multis. She carried that success into her open events with 3 more School Records.”

Sophomore Olivia Stein grabbed a silver medal in the 10,000 meters with a time of 37:31.40, her second time ever running the race. Senior Tyler Flannery placed eighth and scored for the men’s side in the same event with a time of 33:13.69. The third day began with Maddux breaking two more school records. She placed second in the javelin with a mark of 44.25m and placed ninth in shot put with a throw of 12.21m. Junior Cam Peters placed sixth in the high jump with a mark of 1.9m.

The final day of competition ended with three more silver medals and two bronze medals. Junior Abby Wachter, who is also a captain for the team, stood out in the 400 meter hurdles and grabbed a silver medal. She broke her own school record with a time of 1:02.12. “My goal going into the race was to run a PR and not so much worry about placing, so I was overwhelmed with joy when I made the podium and could walk away knowing I left it all out there,” Wachter said.

“Abby Wachter came into this meet ready to burst onto the scene. She ran a perfect Prelims race which set her up well for the finals,” Pharis said. “We had a race plan in place that she executed as well as we could have hoped. It was a windy race, and she still broke the School Record by almost 3/4 of a second. Her second place finishes came from her hard work and determination leading into this meet!”

Senior Mariah Gibbs and senior captain Katie Fleming scored in triple jump for the women’s side. Gibbs placed sixth with a mark of 11.60m. Fleming placed eighth with a jump of 11.41m. Not everyone performed as well as they would like, but overall the Redhawks had a strong end to a good season.

“The heat was definitely something that we weren’t all used to so that affected us a bit,” Maddux said. “Overall I think that this was one of our best meets as a team.”

“Next year should be great as this was a very young team,” Pharis said. “Several had the cliché ‘learning experience’ at this meet, since they did not get the result they were looking for. We also had to leave some athletes here in Seattle that will be ready to make a mark next year at this meet. I firmly believe that our future is bright from the work ethic being left behind from our Seniors, and the passion the underclassmen show in wanting to continue to improve.”