“Improv does not leave you after college. The sense of community within the D1 group is strong, and us teammates form close bonds that do not end; it’s a community that never leaves you,” said Maddie Piper, a sophomore double major in environmental studies and humanities for teaching, who is a current member of Seattle University’s D1 Improv.

Seattle U alumni and current members of Seattle U’s D1 improv group took to the stage last Friday for an improvisation show. The crowd roared with laughter as two teams of improvisers competed in various scenarios and games. Included were scenes in which participants were given crowd suggestions and had to make “such and such walks into a bar” joke based off of the recommendation.

Beyond the wild and humorous on-stage antics, it must be noted that improv is much more than just joking around. Improv groups are often very tight-knit and supportive communities that spread messages of inclusion, empowerment and confidence.

An example of an improv group that spreads positive and affirming messages is the Seattle-based group Captain, an all female improv team. Erica Mcintyre, who graduated from Seattle U in 2015 with a major in Business, is a current member of Captain and former member of D1.

“We want to show that groups of women can be hilarious, we can all be friends, we can all be funny, and it doesn’t matter where you identify in the gender spectrum,” Mcintyre said. “When you are doing improv, the power lies in the fact that you can take on any role, and it’s empowering to do this with all women because sometimes we get sidelined in a scene as being a wife or a mom, but we can be all different types of people.” 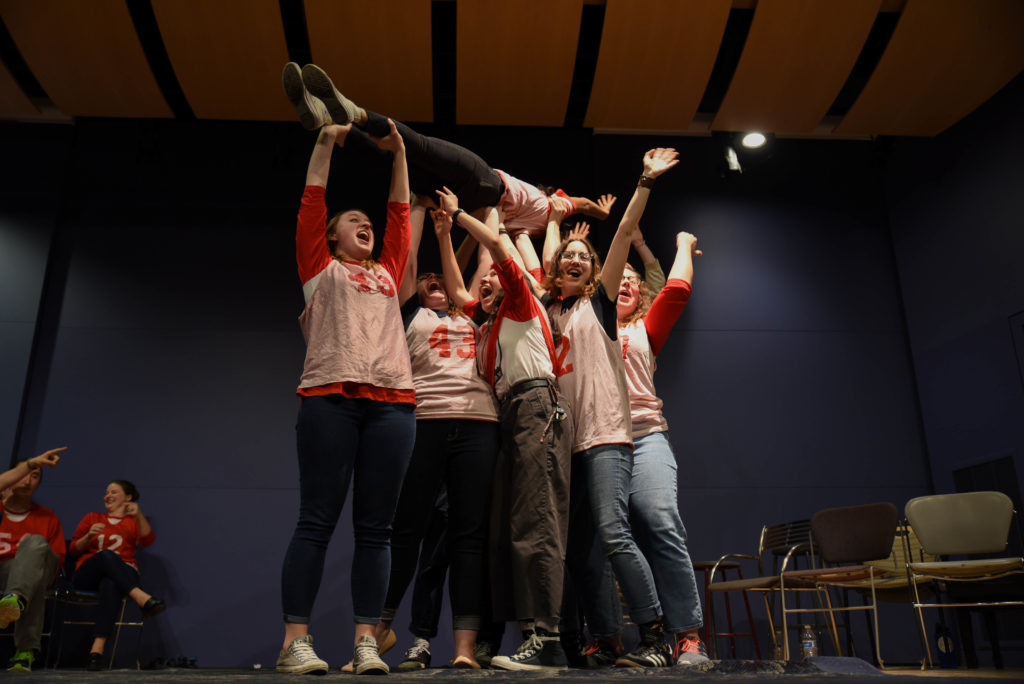 The white team wins the Bringin’ Back the Bunch alumni show.

Devika Parmar, who graduated from Seattle U in 2015 and who now is an improviser at a theater in San Francisco called Unscripted Theater, also enjoys the power that improv gives to performers, enabling them to be unique and break free from expected norms and be someone totally different from the person that they may be perceived as otherwise.

“I’m a five-foot-two tiny framed Indian woman, but one time when I was on stage I was endowed with being an eight foot tall football player,” Parmar said. “You can create these fleeting moments of reality that don’t really exist. Through Improv, you can be anything and do anything and create these moments for yourself that you would never have in real life and live them as if they are true, and it’s really cool.”

For Mcintyre and Parmar, empowerment in improv goes beyond proving that women can be hilarious and should not be confined to gendered roles. They think that groups of female improvisers shouldn’t be used as a marketing tool.

“We wanted to form a group of all female improvisers that wasn’t marketed as lady-prov. Sometimes there are comedy shows with a lot of women involved that are marketed by the fact that it is all women and not just as an improv show. We wanted to be a badass long form group that was all women but not have that be the hook,” Mcintyre said.

All three aforementioned improvisers said that it is sometimes challenging and daunting to perform in front of crowds and come up with funny things on the spot, but through practice and gained confidence, it becomes more natural and improvisers feel more comfortable to let their goofy side come out and not worry about the crowd. 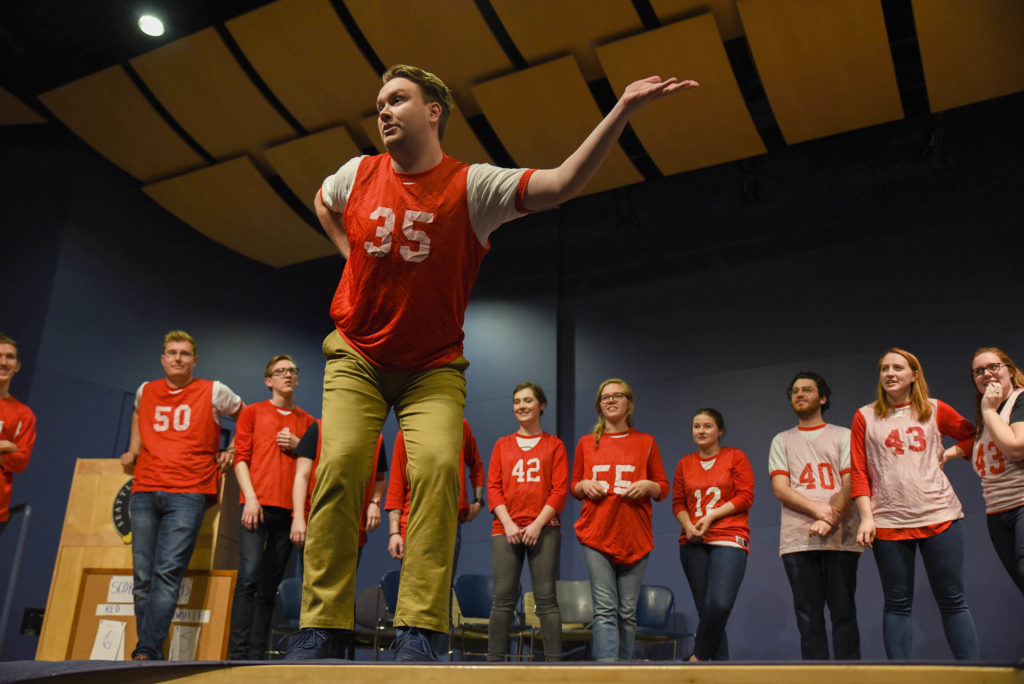 James Cashman during a line game at the D1 Improv Bringin’ Back the Bunch alumni show.

“I’m an imaginative person and stuff just comes naturally to me. I like improv because you can be an adult and still be able to play,” Piper said.

Current members of the D1 improv group enjoyed meeting and working with the alumni, and alumni cherished the rare opportunity to come together again and perform.

“The improv community is really wonderful. A lot of us have cried today, because the idea of us all being together again is great,” Parmar said.

Underneath the abundant laughs and hilarious work of the night’s improvisers, there was a palpable air of community, empowerment and friendship. This event was the first alumni improv event, and an exceptional one at that.