It’s for students who live on campus to become acquainted with familiar faces.

Most of them are other students—a few of which always seem to share your schedule to an eerily accurate degree.

Others are faculty members who can be caught scuttling to and from their jobs at various hours.

These two categories are typical: students and faculty, people who can generally be found on any university campus.

However, I have recognized a third, more subtle category of faces that I see fluttering in and out of buildings unnoticed.

Seattle University is an open campus, meaning anybody can come and go as they please regardless of whether they work or take classes here. It’s not uncommon for seemingly random people to be seen reading in the library, running on the track or lounging in the law school building. Often our campus is where Seattle’s brightest characters find a place to rest their feet.

A few weeks ago, I noticed a new face. It was around 8 p.m. or so, and the rest of the dining facility was almost entirely abandoned.

When I saw him for the first time, he was sitting alone at a dining table at the Cherry Street Market in the Student Center.

Beside his table sat a cart with a small, handmade sign.

The sign was embellished with red letters that said:

“Equal and unconditional love for all our fellow creatures across all space/time/matter/energy is the only way out (of the human misery). I’m walking across the world to spread the message above. I have no money and do not want any. I just need (any) food and water.”

I snapped a quick photograph for my own reflection, feeling inspired.

When I saw him again a few days later he was sitting at the same table, eating another meal.

Overcome with curiosity, I approached him.

I wanted to hear what he had to say. After all, if he says he is planning to walk across the whole world to deliver his message, I thought it ought to be a good one.

He smiled at me, deepening the creases in his face. He quickly corrected me when I called him “sir”.

I looked around. There was no way for me to confirm his identity nor did I have any reason to believe anything he said, but I simply let him continue.

Everything he told me next could very well be a scam, but what he said has been stirring in my mind since that day.

And so, Li began telling me “his story”.

Until two years ago, he said he had been living the “normal life” and was extremely discontent.

“I lived in a house for four years. The last car I had was a well-equipped six cylinder SUV. But I was never this at peace and this happy deep down. Even though I have less, and I have to camp out in the park and it’s not heated, I’m so much happier deep down because I believe now, I’m doing the right thing. I’m not living for myself but for the common good,” Li said.

He explained to me that he suffered from depression for over three years of his life, and had attempted suicide nearly 30 times.

His resolution to spread the message of love began the morning of his last suicide attempt.

“That morning I got up and I started to realize I was being selfish. I was just trying to save myself by getting away from it all. I have to try to save everybody, including myself. So, that morning I decided to start becoming like this,” he said.

That was two years ago.

He launched his new life in Vancouver, camping out at parks with his sign. But he says he faltered at first, abandoning his plan and re-entering the workforce for seven months. Eventually he retreated from his “normal life” yet again.

Li said he knew he needed to leave Vancouver. He came to Bellingham, Wash. in August of last year, then walked the 90 miles from Bellingham to Seattle. He has resided in Seattle for over two months. He sleeps in a nearby park and says he has started to feel like his spot in Cherry Street Market is his “living room”. He likes to sit and eat his food, drink some water and read books.

When Li is out exploring the city, he said he sets himself up somewhere busy. He adjusts his sign so that any passersby can easily read it, and he shakes his maracas. As he was explaining this, he asked if I wanted to see them. Upon my nod, he pulled two wooden, red maracas from his bag and lifted them to my face.

“I shake them and I sing a little bit,” he said. “Music connects people. It softens people’s hearts, softens the barrier that most people have between them and the rest of  the universe.”

He says that people respond in an overwhelmingly positive way, smiling at him, hugging him and some stick around to talk. 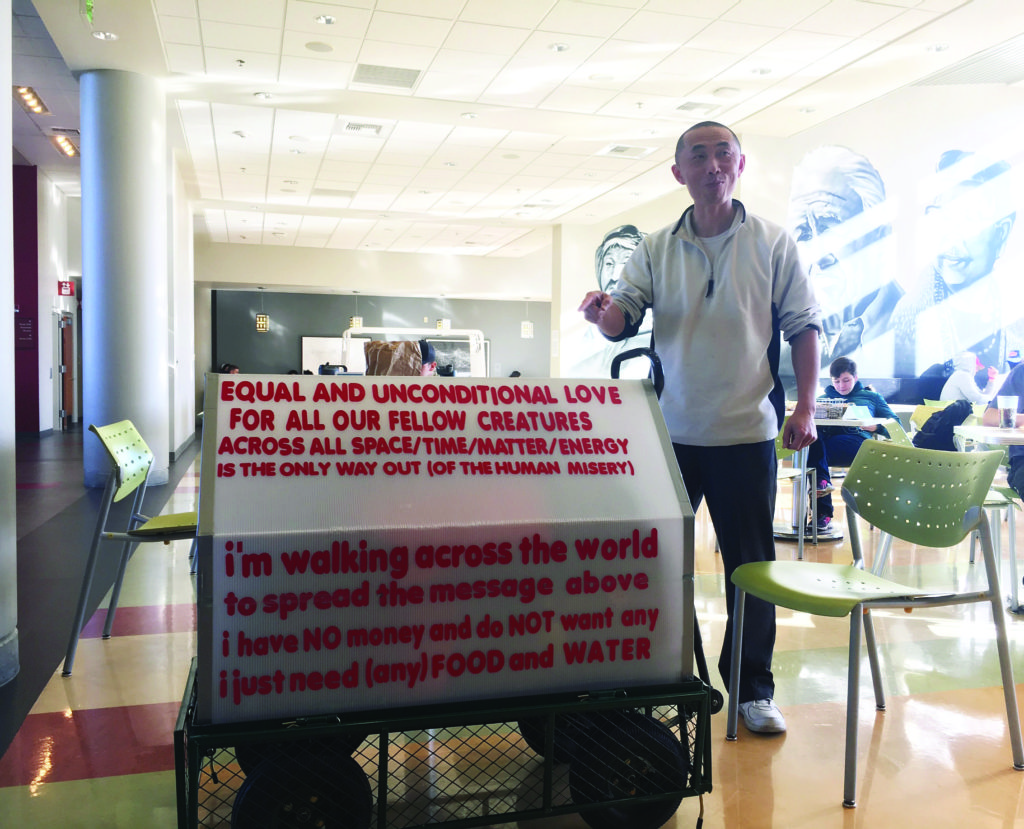 Bing Bing Li, standing outside Cherry Street next to his cart.

He told me a story about an enlightening moment he had a few weeks ago on the University of Washington campus. He was gazing at Mount Rainier and said it struck him that the mountain was alive. He explained how it’s composed of many organic materials and living things, and how the human body is not so different from this mountain, that there are “billions and billions of microorganisms on and in our bodies that coexist within us.”

Li then started to talk about this model on a wider scale.

“There’s a human body [composed] of the entire humanity, made out of all of these humans. [There are] just sizes at different scales of this structure of the entire universe, of which every part of it is alive,” Li said. “At every scale, it works differently, it has different features, different working mechanisms. But that’s outside superficial differences. It’s one thing that transcended everything.”

This concept is what Li calls the “essence of everything.” He said that humans have an acute sense of self that has caused us to live as if we are much more important than anything else in the universe, which is the root of the problems we face.

“It’s a disease that we acquired when the first human was born. We have been getting progressively more and more ill. Sicker and sicker throughout history,” he said.

While Li says his practices are based on core religious beliefs, he has rejected formal religion.

“Religions have been exploited by those people who claim to be apostles or clergy, exploited for their personal beings,” he said.

He also rejects the premise that God is human-like or human-shaped. “For me, what most people see as God, [I see as] the essence of everything that transcends all scales of the entire universe, which is one living thing. Every part of it is a living organism. We humans, at this scale, are just parts of it,” he said.

Li explained that his new journey is one he hopes to continue for the rest of his life. He is trying to “cure the sickness,” and he said he hopes his cause will become a mass-movement.

“I believe it’s probably the most important movement in the entire human history. There have been all kinds of movements–Religious, spiritual, political–but I believe never have we really addressed the root cause of all human problems and suffering,” Li said. “ It’s not just for one group of people, or for a few people’s gains, but for the entire humanity.”

Li says he is leaving Seattle in a matter of days to start down the west coast. He explained he has lingered here waiting for a foot injury to heal.

If this is truly his plan, Li will encounter many new faces during his journey cross-country, but Li’s face is one that I will always remember.

“It’s about the message,” Li said, pointing at his sign as I took a photograph.

Haley can be reached at
[email protected]