State of the Union: SGSU Moves Forward After a String of Resignations Highlight Persistent Problems

Following a series of resignations, Student Government of Seattle University (SGSU) is in a state of flux. After four representatives have departed from their positions, current members of the governing body are working to evolve and propel the organization forward, while also identifying ways to improve the critical relationship between student government and university administration.

On Monday, Jan. 30, Carlos Rodriguez resigned from his role as President of SGSU. Rodriguez cited health and emotional concerns such as worry and increased anxiety due to his status as an undocumented student living under the Trump administration.

“I’m definitely going to be out there protesting,” Rodriguez said prior to his official resignation in an interview with the Spectator. “At the same time, I think I just need to be with communities that I can identify with a lot more. Then I can just get a hold of my health.”

Rodriguez’s move drew attention from many news outlets around Seattle, as the resignation of the respected leader shined a light on the very real emotional fears manifesting into health concerns for undocumented immigrants today.

While Rodriguez’s departure from student government has left a hole in Seattle U’s governing politic of student voices, he isn’t the only elected official to leave the organization. In the last several weeks, three other members stepped down from their role in SGSU.

Turns out, when you want to talk about radical things on a campus, being in a bureaucratic setting is not very conducive to that process. -McKenzi Bravo

Junior humanities for leadership major McKenzi Bravo said she was generally feeling overworked in trying to balance her role as the at-large representative with other organizations in which she’s involved, such as LA CASA (Latin American and Caribbean Awareness Student Alliance) and the Matteo Ricci College Task Force. She would rather allow a student with more energy and time to embrace the position of at-large rep.

But a heavy workload wasn’t the only factor driving her resignation. Bravo said she joined SGSU with the hope that she could use her position as a vehicle to continue with grassroots movements in which she’d been involved in the past, such as the MRC Coalition. She wanted to use her leadership role as a platform to center campus conversations on racism, transphobia and sexism, among other issues she deems central to this community.

“Turns out, when you want to talk about radical things on a campus, being in a bureaucratic setting is not very conducive to that process,” Bravo said.

She also spoke of a strained relationship between student government and university administration, citing what she describes as “respectability politics” SGSU members are expected to uphold when in conversation with administrators.

Because of the way SGSU is enmeshed in respectability politics Bravo said, “It’s really hard for anyone at SGSU to be direct and genuine with administrators about how they’re being treated and how students are being treated.”

Bravo said that oftentimes, administrators would not consult SGSU members before making major decisions. This was illustrated in October when university officials amended the demonstration clause of the Seattle University Code of Conduct. 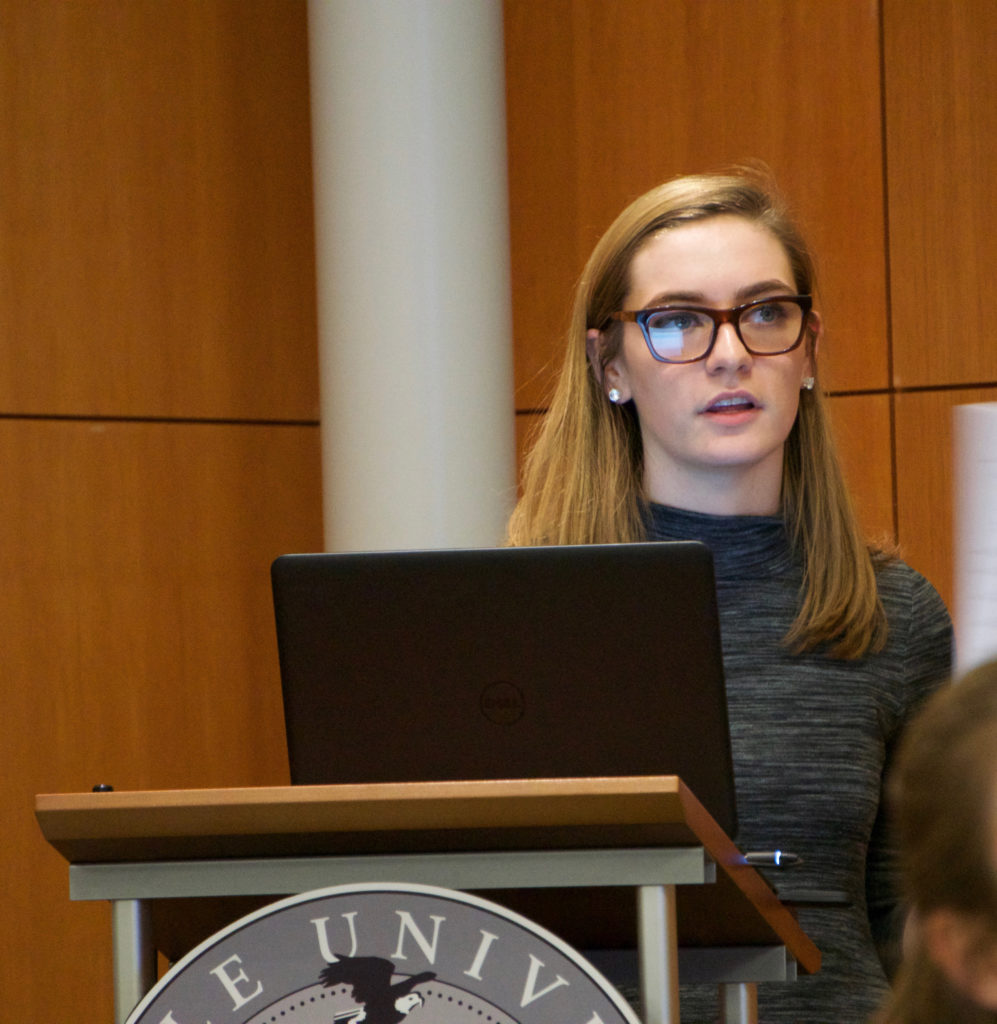 Sophomore Kate Hannick will serve as acting President of SGSU.

The clause stated that protest organizers must meet with a member of the Student Activities Office to plan facilities reservations and coordinate with Public Safety prior to the demonstration, which cannot “actively disrupt scheduled class meetings, teaching, administration, or disciplinary procedures and/or other university functions or authorized activities.”

The clause change was controversial, as it put strict limits on protest organizers and, as many students expressed, appeared to be a direct response to the MRC sit-in last spring.

According to Bravo, SGSU members were notified the night before that a meeting would be held the following day to allow SGSU representatives and students to discuss Code of Conduct changes with administrators.

Bravo said the notification was so last-minute that if it hadn’t been for the help of then-Multicultural Representative Vic Vong, who took the initiative to immediately create a Facebook event in order to generate student attendance of this meeting, barely anyone would have shown up.

It is instances like these, Bravo said, in which SGSU representatives are left in the dark on major university changes—that highlight the frayed communication between student government and university administration.

I’m going to try my best to continue [Carlos’] legacy and fight for justice for students like he did. -Kate Hannick

She said that change in SGSU is slow-coming, and that there is a lack of urgency when it comes to making changes.

“We’re being complicit,” she said.

Vong added that in her role as multicultural representative, she was met with resistance when trying to ignite change.

Vong said the multicultural representative used to have access to the entire student listserv. After this listserv was used to send out school-wide emails publicizing events transpiring in MRC last spring, the administration “cracked down” and made it so that only president and executive vice president had access.

She added that past multicultural reps had advocated and served as allies for various movements on campus, but others in the community didn’t see that as a proper use of their role in student government.

Both Vong and Bravo are women of color and often advocate for marginalized voices in the community. Stepping down from their roles has created a worry of taking away the “seat at the table” of the communities for whom they represent.

Bravo said it’s scary for her to consider that if she or other marginalized individuals aren’t “at the table” during pertinent campus conversations between students and administration, questions imperative to those communities might not be raised. She had to weigh this heavily when considering whether or not to resign.

Vong echoed a similar sentiment when deciding if resigning was the right decision to make. She said many of the students elected during the fall cycle are people of color.

“If I leave now, am I abandoning them?” Vong said. “Because here they are, they’re excited about doing work, they care and have this idea of student government as a potential vessel for change. And what does it say to them, how am I leaving them behind if I quit now?” 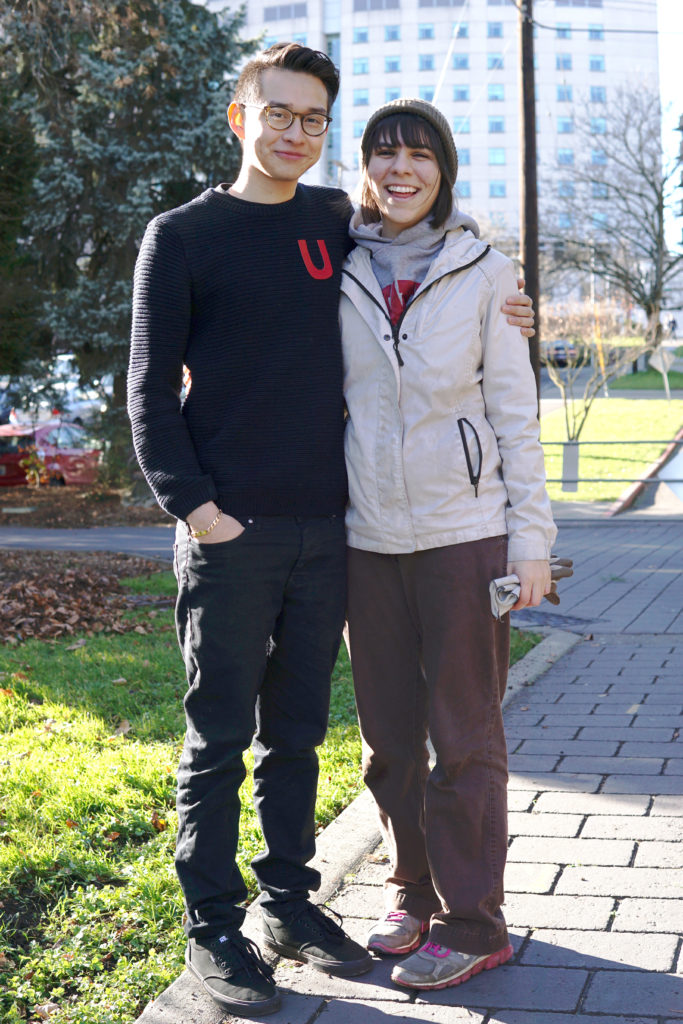 Carlos Rodriguez (left) and McKenzi Bravo plan on engaging the community in other ways.

The resignations have created new vacancies in the organization. The positions of multicultural representative, at-large representative and non-traditional representative will be filled per the bylaws and constitution of SGSU, which state that since this is the middle of the school year, the internal governing body will appoint—not elect—new students to take on the roles.

One position that is automatically filled, though, is that of president. Executive Vice President Kate Hannick will step into that role.

Hannick, a sophomore public affairs and economics double major with a Chinese minor, said she is ready to continue the fight Rodriguez started. She said Rodriguez has contributed so much to the campus in a profound way, and that his impact has both breadth and depth.

“Carlos was the president that was elected, that the student body chose,” Hannick said. “And so I’m just sort of stepping into that role after he has left and I’m going to try my best to continue his legacy and fight for justice for students like he did.”

The SGSU president is the only student who sits in on the meetings with the Board of Trustees, the administrative body made up of emeritus faculty, Jesuits and other notable members of the community. The Board of Trustees makes virtually every financial decision for the university.

As president, Rodriguez sat in on Board of Trustee meetings. He said that during his presidency, change was slow-coming on the part of administrators and at times it took the shedding of tears for them to take action on an issue.

“Usually, if I started crying, something changed after that,” Rodriguez said.

Hannick referred to SGSU as the bridge between students and administration.

She said that in consideration of that model, administration often times comes to SGSU after they have already made a decision, and will then ask SGSU to inform the student body of the change.

Hannick said that leaders in SGSU have pushed for the cycle to be flipped so that leadership is proactively seeking student voices for input in crafting new policies rather than administration making decisions for which SGSU has to respond reactively.

“So I think that has been a big focus of SGSU, is to flip that decision-making process to where there’s more student-voice involved,” Hannick said.

Disruption is never easy, and certainly the president’s resignation is a disruption. -Michelle Murray

Vice President of University Affairs of SGSU Braden Wild spoke about the relationship between administration and student government. Wild said he is hesitant to say that administration isn’t proactive in responding to SGSU’s recommendations.

“But I think it’s fair to say that this university is not a shared-governance university,” he said. “We’re not [the University of Washington] where students have set regulated power in making decisions at the university level.”

He added that it’s not as if, suddenly, student government needs a bigger seat at the table in conversation with the Board of Trustees and other university officials, but he does think that communication between the two bodies could be improved in order to generate more student input.

The four resignations have brought to light some persistent issues within the body politic. It can be said that Student Government of Seattle University is at a crucial turning point to inspect the governing body internally.

In the meantime, SGSU members plan to propel the organization forward and continue the fight for undocumented students that Rodriguez ignited.

“Disruption is never easy, and certainly the president’s resignation is a disruption,” said Vice President for Student Development Michele Murray. “And I think we’re very lucky to have a talented executive group in student government… I have every faith that student gov will continue, and will continue well, under the leadership of Kate Hannick.”