Redhawks Close Out Homecoming Week with a Win 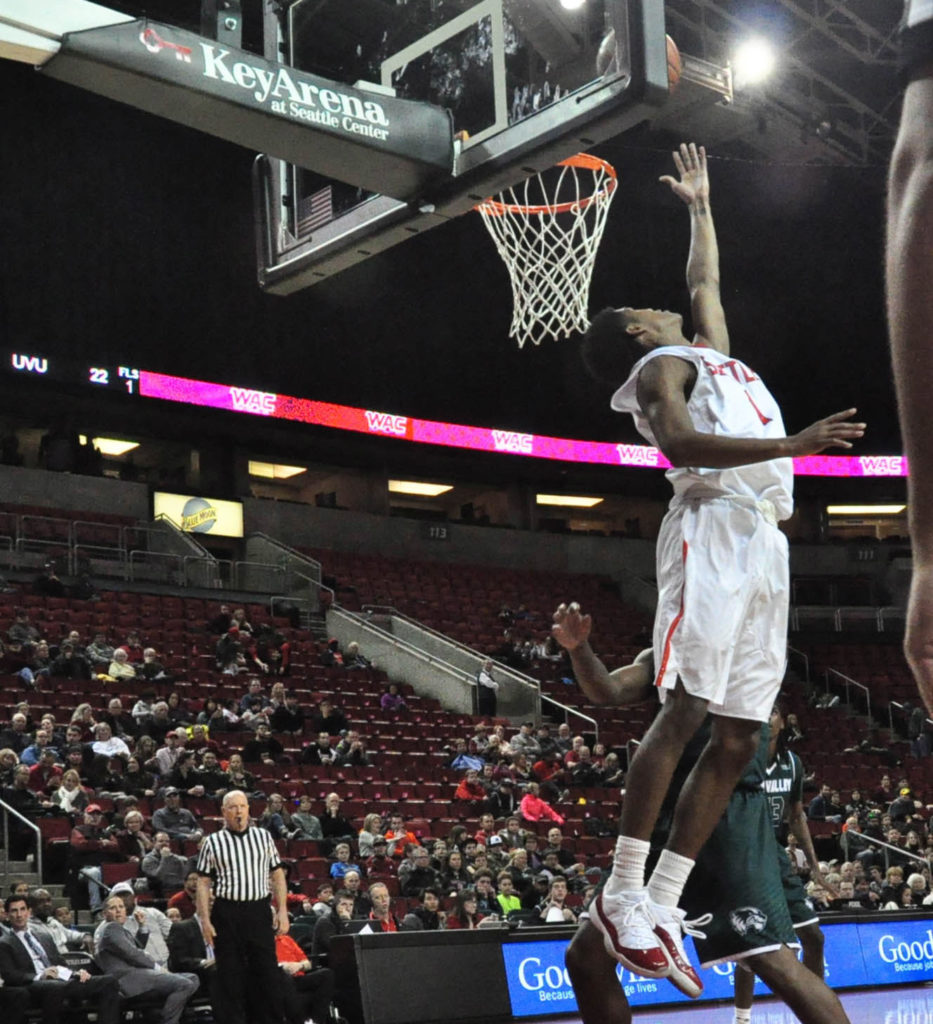 The bleachers were more full and the fans were louder than usual at the Seattle University men’s basketball game on Saturday night. Throughout the game you heard, “Let’s go Redhawks,” followed by a series of six claps, and again, “Let’s go Redhawks.” 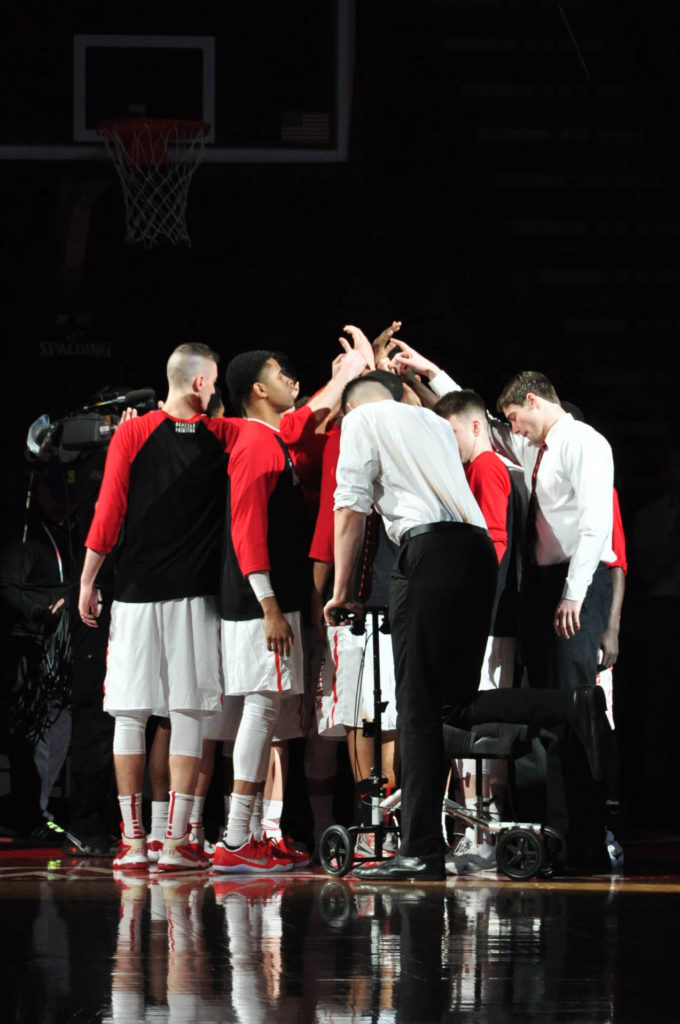 Not only were the bleachers at KeyArena bleeding red; the Space Needle was also lit red in celebration of Seattle University’s 2017 Homecoming Week and the school’s 125th Anniversary.

“When we have our students and our alumni and the building is buzzing and we have great energy, our guys definitely play better,” said Redhawk’s head coach Cameron Dollar. “And so that’s why I definitely give our game ball to the SU community led by our students homecoming, alumni, friends and family.”

Freshman guard Matej Kavas also noticed the number of fans that came out to support the Redhawks. Thankful for those in attendance, Kavas and the team gave it their all and performed at their best.

The Redhawks were able to maintain a steady lead throughout the game. Kavas contributed 18 points while senior forward William Powell scored 13 points. Senior Brendan Westendorf scored 11 points. These players helped the Redhawks secure the win. The Redhawks are now at a 3-4 in WAC standings. 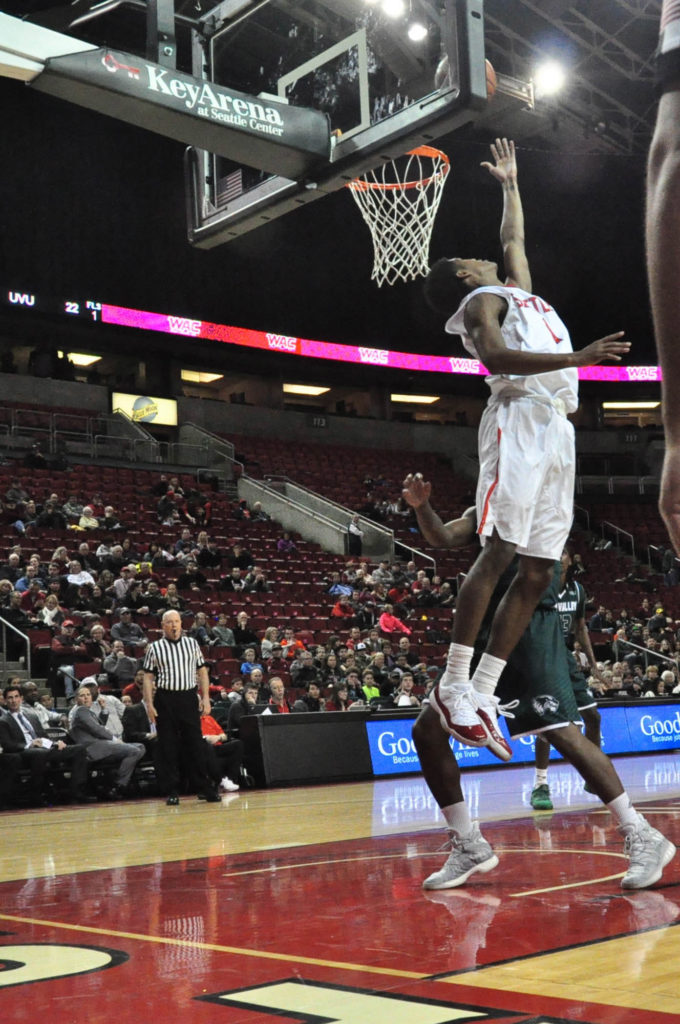 At the end of first quarter, Seattle U was up 14 points, however, the Wolverines came back with more energy at the start of the second half.

During the third quarter, the Wolverines had a stronger offense and they began to catch up, so much that with 15 minutes and 55 seconds remaining in the game, the Wolverines were behind only five points. Moments later, Matej scored a 3-pointer, extending the margin between the two teams, 38-30. Westendorf and senior Emmanuel Chibuowgu followed suit.

A key point in the second half was when Dollar put freshman guard Morgan Means and freshman forward Scott Ulaneo in the game. The two played steady, basic plays, which allowed the Redhawks to come back to the prominent goal: to score field- goals and win the game.

Putting the team’s freshmen in the game also allowed the key players to rest. A technique that helped the team beat Utah Valley. As the key players came back with renewed energy, the Redhawks began to gain their lead over ten points.

The ending of the game also marked the end of the senior players’ games at KeyArena. Guards Westendorf and Manroop Clair, 23, and forwards Chibuowgu and William Powell, 21 are in their final season, had played their last game at KeyArena.

“It seems like yesterday I just got here. It’s been a great journey. I’m happy with the team,” Powell said.

A bittersweet end at KeyArena, Dollar mentioned that now that the games will be at the Connolly Complex, it will be more accessible for Seattle U students to support by attending games. 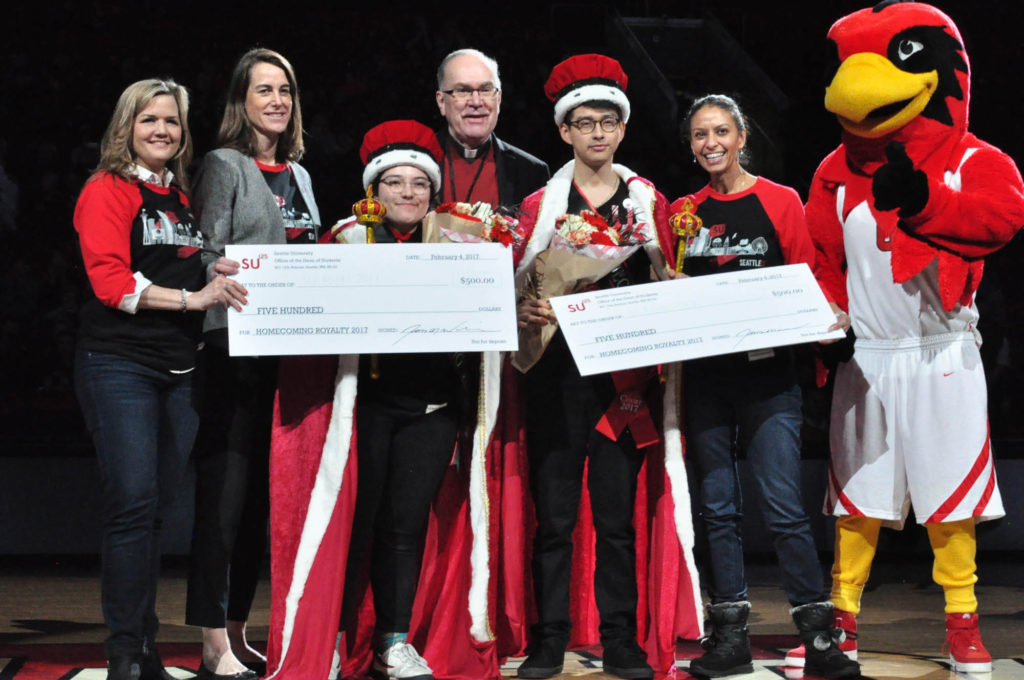 Saturday’s game and the dance that followed shortly after the game at the main floor of the arena ended Seattle University’s 2017 Homecoming Week.

The Redhawks play Chicago State next on Thursday, Feb. 9 in Chicago at 5 p.m. followed by a game against UMKC two days after, on Feb. 11.