“If a fire starts in one room in a house, does it stay contained in that room?” Aneelah Afzali asked a room filled to the brim with children, teens and adults with a shared purpose: fighting the negative stigmas and stereotypes that contribute to Islamophobia.

The audience responded with a resounding “No.”

“That’s right,” Afzali continued, “It spreads to other rooms as well.”

Aneelah Afzali, Executive Director of the American Muslim Empowerment Network at the Muslim Association of Puget Sound (MAPS-AMEN), imparted that if someone is Anti-Semitic, he or she is 32-times as likely to be Anti-Islamic as well.

This was one of the many facts shared at the “Make Your Voice Heard Youth Advocacy” event on Sunday, Jan. 16 facilitated by MAPS-AMEN and Kids4Peace, and co-sponsored by almost 100 groups, organizations and businesses throughout the greater Seattle area.

Following the hate crime at the Muslim Association of Puget Sound in November, in which someone destroyed the main granite sign outside the mosque with a sledgehammer, Kids4Peace approached Afzali about ways to fight the growing number of hate crimes directed at Muslims.

One of those solutions was to teach youth concrete skills and strategies to use their voice to combat hatred, which blossomed the first inaugural Make Your Voice Heard event.

The purpose of the workshop was to bring youth together to learn how to effectively use their voice in advocacy work, even at a young age.

About 125 children and teenagers of all faiths, races and genders signed up for the event, which devoted four hours to learning about ways to fight Islamophobia, specifically through the media.

Small groups of youth were paired with writing coaches to write either a Letter to the Editor or an Op-Ed that crafted humanizing, positive stories about Muslims. The writing coaches represented a wide cross-section of powerful voices in Seattle, including journalists, educators and politicians.

Aisha Addish, Team Program Specialist at the Boys and Girls Club, was also one of the writing coaches for a group of sixth and seventh graders. She said of the children, “I’m really surprised and really happy about the diversity and how many non-Muslims came and showed their support. It makes me want to continue coalition-building and working with other people of faith to create dialogue and discussion about Islamophobia.”

After a quick break for Muslim prayer and snacks, the youth finalized their letters. Next, they were invited to speak in front of the entire room for a press conference with representatives from publications like The Huffington Post. 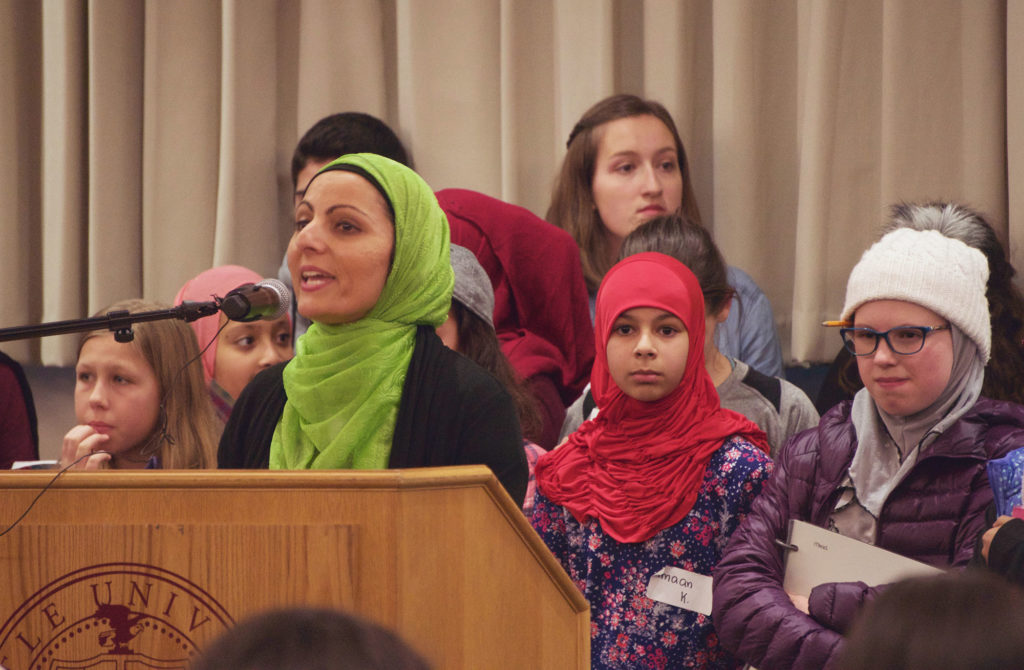 Aneelah Afzali speaks out against Islamophobia.

“It’s really hard to ask youth to come and share personal stories about themselves with a group of people they don’t know very well, even in small groups, and to do that in front of a room of 100+ people is really difficult.”

Despite the large audience, when it was time for the press conference, about 20 girls and boys read their stories that shared their positive experiences with people of the Muslim faith to a room of almost 200 people.

“This event completely exceeded all of my expectations, in terms of the number of youth who were interested in coming here, as well as seeing the passion and the commitment that they jumped into it with,” Goldwang said. “To see how honest and how authentic they all were in sharing what was in their heart, I thought that was amazing and I think it was incredibly inspiring to see that and to see the hopes and dreams that these youth have for their future.”

The event concluded with the last Muslim prayer of the day, followed by goodbyes to new friends and allies.

Afzali added, “These kids’ stories were so inspiring. They humbled me, they inspired me, they rejuvenated me, and they were heartwarming. I hope they walk away recognizing their power.”

A 12-year-old child finished her story at the press conference with, “Muslim Americans are not the other—they are us,” summing up the amount of humanity, compassion and vigor present in a room full of youth ready to create change.