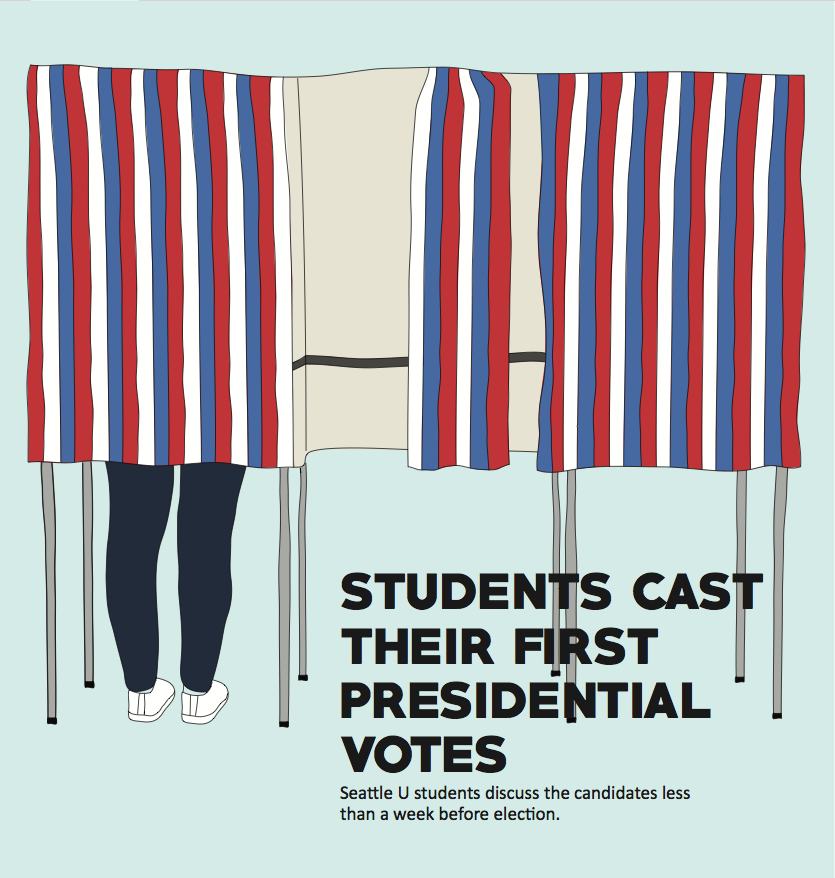 What has arguably been the most contentious presidential election in U.S. history is also the first one most Seattle University students can legally vote in. But the excitement a new voter should feel has been quelled this year by what many have described as a disappointing pair of major party candidates.
“There’s just so much at stake, especially with a Supreme Court vacancy and all of the justices who will probably retire in the next eight years.”
– Caroline Guess
Democratic nominee Hillary Clinton and Republican nominee Donald Trump are, according to an August poll by ABC News and The Washington Post, the two most unpopular U.S. presidential candidates ever. With less than a week until the election, time is running out for students to decide whether to settle with one of them, or to go for an alternative option.

Though state election projections suggest that over 50 percent of Washingtonians will support Clinton, the vote wasn’t always in her favor. During the Washington caucuses in March, former Democratic candidate Sen. Bernie Sanders beat Clinton markedly, receiving 72 percent of the state’s delegates. Nationwide, he received 29 percent more of the “youth vote”—defined as anyone between the ages of 18-30 who is registered—than Clinton and Trump combined, according to a report by the Center for Information and Research on Civic Learning and Engagement at Tufts University.

Since Sanders conceded the Democratic nomination in July, his former Washington supporters have struggled in deciding whether or not to turn their support to Clinton. 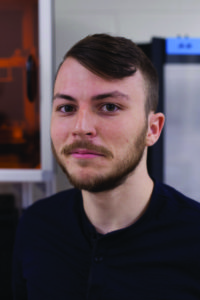 The worst trend that has occurred for this election cycle is the fact that our current presidential candidates have set a precedent for the entertainment factor for current politics… very few people ended up watching the vice presidential debates simply because it wasn’t as entertaining as the bickering that Donald Trump and Hillary are characterized by.
– Jacob Price

For Caroline Guess, this wasn’t a difficult decision.

“There’s just so much at stake, especially with a Supreme Court vacancy and all of the justices who will probably retire in the next eight years,” said Guess, a sophomore political science and Spanish major. “As soon as [Sanders] dropped out, I realized I needed to switch my support if I want to continue living in the world that I live in now.”

Guess supported Sanders in the early months of the election cycle because he spoke to the issues most important to her—namely women’s health care and civil rights.

Though he didn’t win the Party’s nomination, Guess explained, Sanders was able to bring attention to what many Democratic voters saw early on as major gaps in Clinton’s proposed policies. Since ending his campaign, Sanders has collaborated with Clinton on a few of her policy plans, including one that proposes free college tuition for any student with an annual household income of $125,000 or less.

“[Sanders] actually really helped liberalize her platform a bit because he got so much attention,” Guess said. “Even though he didn’t win, some of his policies and ideas did.”

Guess never considered voting for Libertarian nominee Gary Johnson or Green Party nominee Jill Stein. Though she believes third parties can be helpful in shifting platforms, she emphasized the danger of making a protest vote in an election as important as this one.

In the 2000 presidential election, Democratic nominee Al Gore lost the presidency to George W. Bush by just 537 votes. The Green Party candidate that year, Ralph Nader, received 97,421 votes, leading to speculation that he was responsible for Gore’s defeat. Exit polls from that year reported that, had they only had the option of voting for Bush or Gore, a larger percentage of Nader’s supporters would have chosen Gore.

Guess said she hopes the outcome in 2000 does not foreshadow what will happen next week.

“Trump could still win the White House, just because people are split in the Democratic vote,” she said. “That, to me, is terrifying and scary and reason enough to vote for Hillary Clinton.

As Clinton’s campaign platform has inched further and further to the left, Guess has become comfortable enough to put her trust in the nominee. At 19 years old, Guess said she is excited to cast her first vote for president, even if her chosen candidate is far from her idea of perfection. 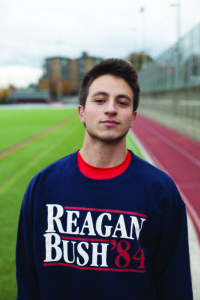 Lucas Kret, once a Bernie Sanders supporter, cast his vote just last weekend for Gary Johnson, nominee of the Libertarian Party. For him, not only is Trump out of the question, Clinton’s foreign policy and her ties to big banks compelled Kret to seek a different option.

“It would be really healthy for a national political dialogue to pay more attention to the third party,” Kret said. “I’m voting for [Johnson] because I’m dissatisfied with the Democratic Party.”

Hillary Clinton, Kret says, would continue this country’s long history of military intervention in foreign countries. She voted to go to war in Iraq in 2002 and, as Secretary of State, pushed for intervention in Libya, which resulted in the destabilization of the region. Obama later called it “the worst mistake of his presidency.” Clinton advocated for the distribution of weapons to rebels in Syria, many of which ended up in the hands of our enemies.

“Her continued advocacy of intervention, and the use of tactics that clearly have never worked throughout history alarms me,” Kret said.

Furthermore, Kret finds Clinton’s advocacy for a no-fly zone in Syria to be troubling.

“The United States has clearly made many mistakes in the post-9/11 world,” Kret said. “But Clinton’s policies seem like a continuation of these policies, not a shift away from them.”

It’s totally understandable, Kret said, for people to feel the need to vote for Clinton to avoid a Trump presidency.

“I have the privilege of voting in a non-battleground state,” Kret said. “However, I feel that because of how obviously bad Trump is, some people have become slightly complacent and have failed to fully scrutinize the actions taken by both Clinton and the DNC throughout this election.”

Kret, who sent an absentee vote to Santa Fe, New Mexico, was a Bernie Sanders fan even before the senator ran for president. He admired Sanders because he demonstrated accountability and a strong adherence to moral principles, which made him more reliable, Kret said.

“He was such a breath of fresh air.”

During the primaries, Kret said, it was clear that the majority of the Democratic National Committee supported Clinton because she’s the “established candidate.” Kret added that a line was crossed when it came to the way Debbie Wasserman Schulz, Donna Brazille and other prominent Democrats expressed their support for Clinton.

“The collusion isn’t really debatable. It’s a fact. It happened,” Kret said. “I understand that the Democratic Party’s goal should be winning elections, but it seems obvious to me that the people’s voice and best interests are largely irrelevant to party officials, and I simply cannot support that.” 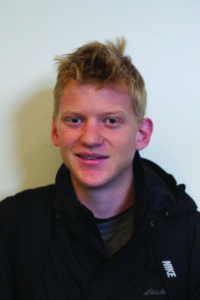 I personally think that this election is disappointing. It’s a constant ebb and flow of accusations and finger pointing, leading to people being primarily focused on the negatives of what our candidates have ‘maybe’ done. If you ask someone why they’re voting for who they are voting for, they’ll revert to telling you negatives about the other candidate rather than positives about their vote.
– Chay Weaver

Taenum Fotheringill said she has looked forward to voting in this presidential election since she was 16 years old.

“I am thrilled that I will be able to say that in my first presidential election, I helped elect the first female president of the United States,” said Fothergill, a junior public affairs and humanities for leadership major.

Fotheringill, who has supported Clinton since the 2008 election, said she has no doubt in her mind regarding Clinton’s ability to successfully lead the United States.

“I’m voting for her because I believe that she’s truly qualified and will be able to really make strides in our nation’s history and progress for the things that are on our national agenda right now,” Fotheringill said.

While there have been many arguments concerning Clinton’s integrity throughout this presidential election, it is hard to dispute the hefty experience she brings to the table.

After earning her law degree from Yale Law School, Clinton worked as an attorney for the Children’s Defense Fund. As the first lady from 1993-2001, Clinton created the Children’s Health Insurance Program, which still ensures healthcare for millions of children today. She then served as a U.S. senator from 2001-2009. After losing the democratic nomination to Barack Obama in 2008, he appointed her as the secretary of state, a position which she held until 2013.

Throughout this presidential cycle, Clinton has taken severe hits to her ethos, as many Americans, including college students, view her as untrustworthy. Some in the Republican Party have painted her to be a villainous character, an idea reiterated by Trump’s notorious remark in the third presidential debate in which he referred to her as a “nasty woman” on live television.

Given her extensive years in public service, Fotheringill said she thinks a lot of the criticism Clinton receives is rooted in sexism and decades of smear campaigns prompted by the Republican Party.

“I think a lot of people make claims that it is not [rooted in sexism] and that she’s just truly a horrible person because of some things that she’s done, namely the emails,” Fotheringill said. “But I really don’t think that that is a founded explanation for saying she’s unqualified, because there have been many politicians that have made far graver mistakes and who happen to be men and who are not nearly dragged through the mud as much.”

Fotheringill said it’s time to appoint a woman to the pinnacle of leadership positions.

“It will make me so happy, just so happy, to see a woman representing the United States in every way,” Fotheringill said. “There are so many women in leadership positions right now who are doing such incredible work, and to have a woman at the top, truly at the top, will be powerful. Women are powerful.”

Ultimately, she hopes that an African American president followed by a female president isn’t just a blip on the radar, but a continued trend within the leadership of our federal government.

“I really hope that it’s a sustained change that we see—folks of different races, religious beliefs, genders—in the white house and in national government, federal government,” Fotheringill concluded.

The editor can be reached at
[email protected]