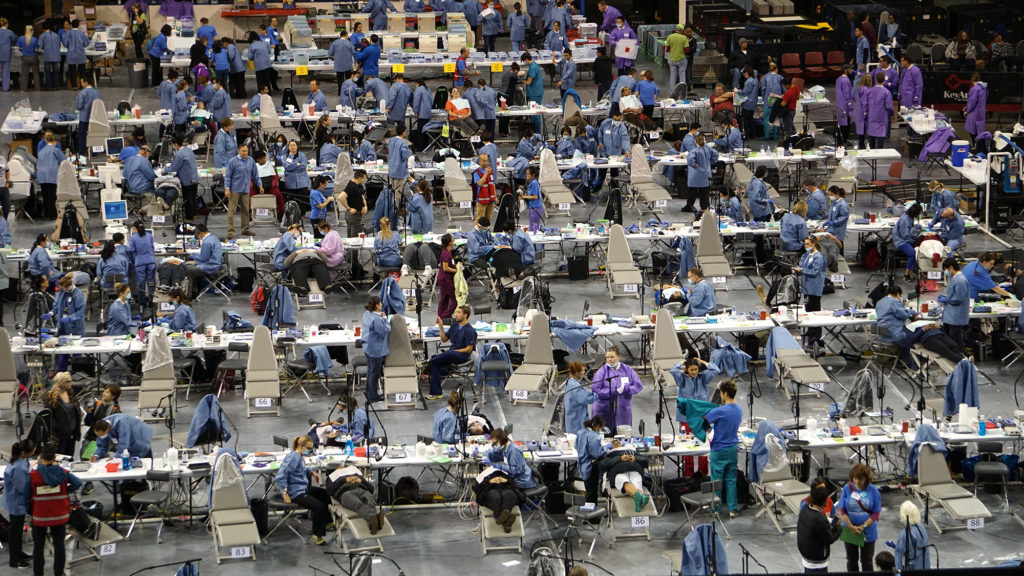 This weekend, Halloween festivities were plain to see across the city, but there was also a less recognized event that was also worth celebrating. From Thursday to Sunday, Key Arena housed the annual Seattle/King County Clinic, where members of the Seattle community and beyond could go to receive free medical service. The clinic was staffed by volunteer practitioners from organizations like the Washington Medical Association and Washington Dental Association, to provide vision, dental and medical care to visitors. 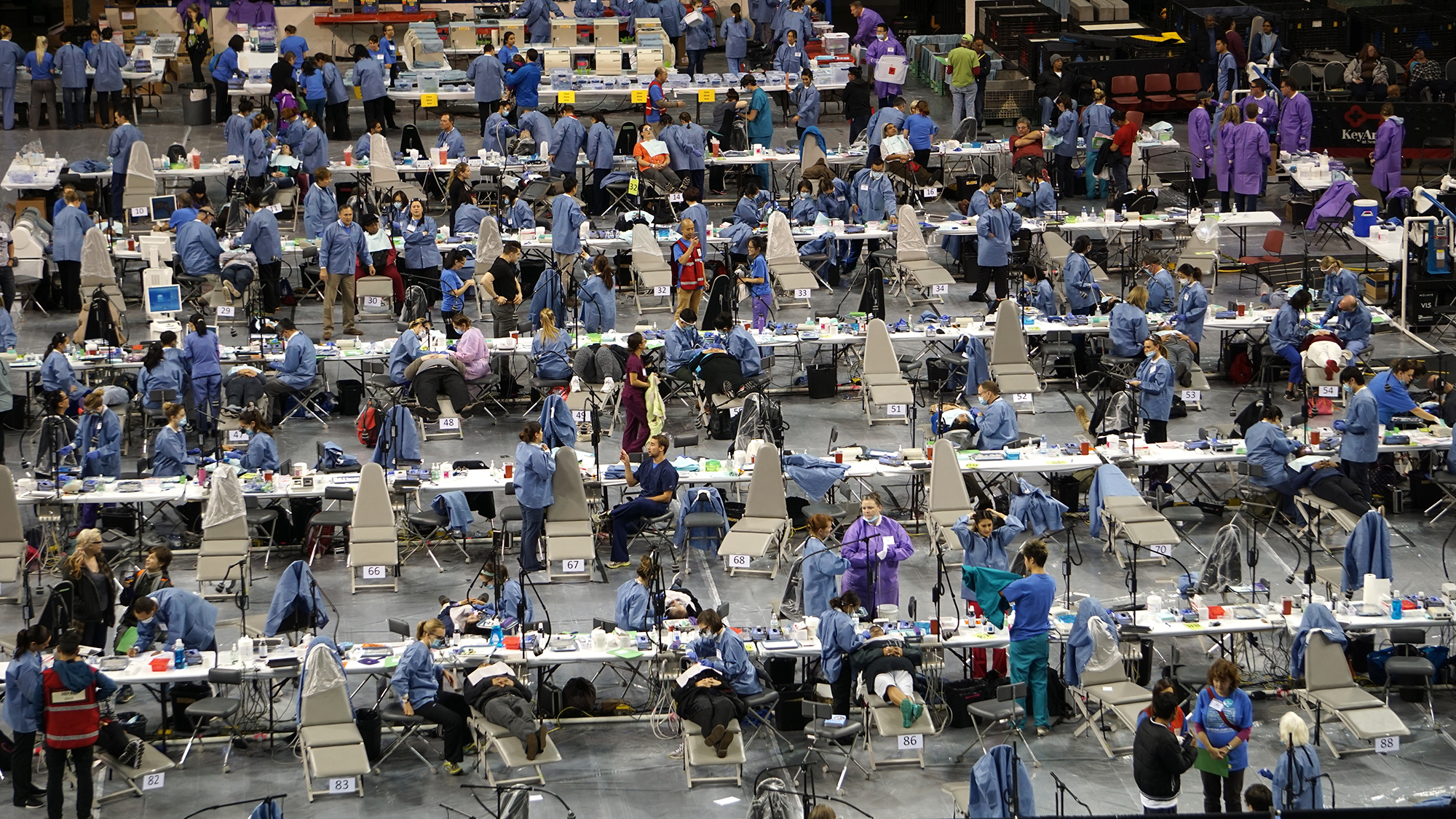 For four days, Key Arena became a clinic for those in need.

The Seattle/King County Clinic is in its third year of service to the community and in that time, it has become one of the most distinguished volunteer clinics of its kind. It is the largest clinic in the country, with over 3,000 volunteers represented in practitioners, escorts and other positions dedicated to helping patients. Together, these individuals worked toward the goal of assisting a total of 4,000 patients. Over the weekend, they performed over $3.7 million worth of patient care.

“The amount of people they can help is tremendous,” said Casey Collins, one of the first advisors for the Seattle/King County Clinic. “It’s good to know it will only get bigger and better.”

A major focus of the Seattle/King County Clinic was being able to serve the largest, most diverse group of people possible. Deborah Doust, Director of Communications for the Seattle Center Foundation, explained that while most of the patients admitted were from the Seattle area, people from outside the city and even from other states came to for medical attention.

As part of their efforts to be as accessible as possible, the clinic had no major barriers for entry and did not even require identification to receive service.

The clinic also allotted multiple resources to help communicate with those who do not speak English as their first language. Not only were there several volunteer translators for most of the commonly spoken languages, but there were also consoles capable of real-time translation for those that were not represented.

“What we strive to create here is the most respectful culture we can,” Doust said. “Good health is essential for a healthy community.”

Such an ambitious endeavor would not have been possible without immense support from donors and volunteer outreach efforts. The Seattle/King County Clinic had 110, many of which are companies from Seattle.

Philips Healthcare made a major contribution to the dental division in the form of a 3D printer used to make crowns from resin. The clinic is one of  many places to have used the technology for this purpose. The results proved to be far more efficient than what is seen with a typical dentist. 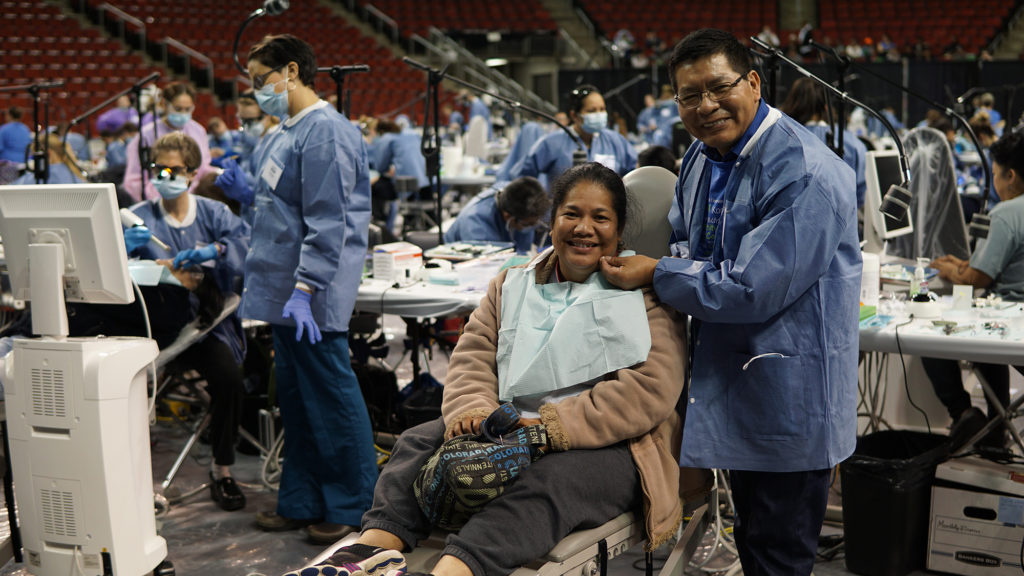 For four days, Key Arena became a clinic for those in need.

In most cases, the process from inspection of the cavity to a completed crown took no more than 30 minutes, allowing patients to leave with a complete service that normally takes two weeks. Other pieces of equipment, like x-ray machines, retinal cameras for eye exams and 120  stations, would also have not been available were it not for these donations.

Just as important to these material contributions were those that gave their time to helping run the clinic. In addition to medical procedures and assisting patients, volunteers were also very important to outreach efforts and connecting potential patients to their services. To reach this objective, the clinic worked in cooperation with King County and the Seattle Housing Authority to reach out to homeless groups and those that couldn’t be contacted electronically.

“I think it’s a requirement for anyone that’s licensed,” said volunteer radiologist Ted Dubinsky in reference to helping in clinics like this one.

The clinic offered a wide variety of services and even took responsibility for those they could not provide for on the premises. This was most notably displayed in the cases where mammograms and other tests led to a cancer diagnosis. The clinic would then contact outside practitioners and transporting the patients to them.

The clinic’s involvement outside of these four days was also seen in the vision department, where those in need of glasses would be able to receive prescription lenses and the frames of their choice free of charge come December.

The Seattle/King County Clinic has progressively grown with each passing year and is likely to come back on an even larger scale in 2017. For more information on the clinic and how to register as a volunteer, visit http://seattlecenter.org.