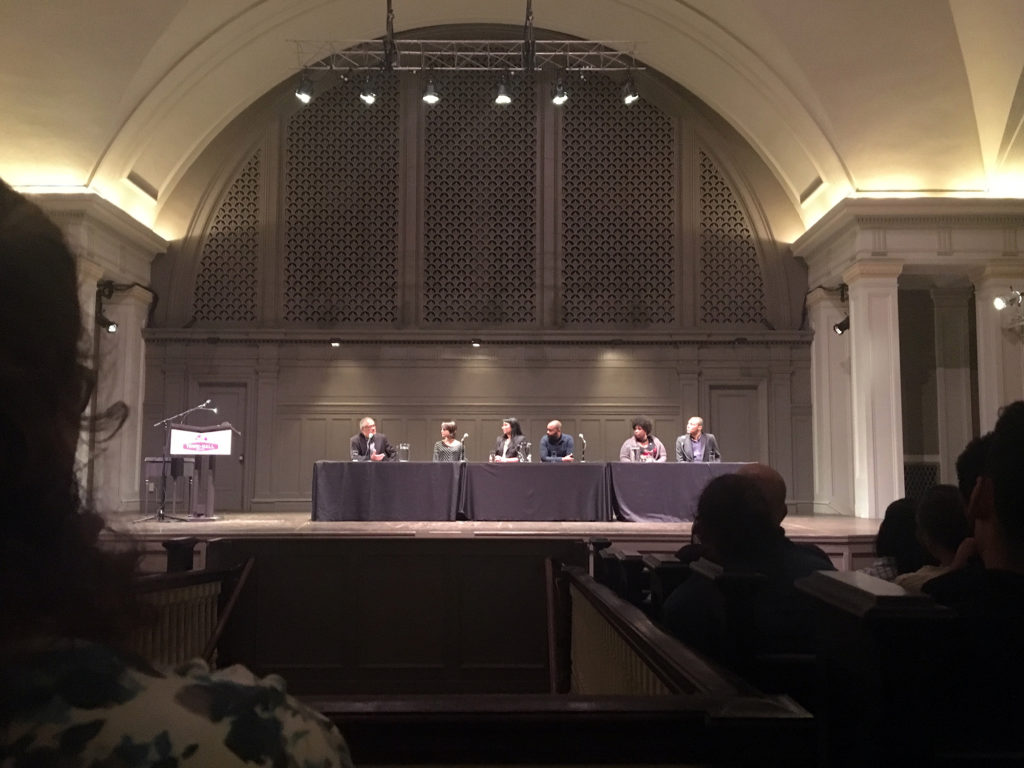 On Tuesday Oct. 25, Seattle Town Hall was filled with a packed crowd of journalists, students and citizens alike. The alluring pull, #JournalismSoWhite was an event addressing the lack of diversity in the media. Consisting of a panel of six journalists of color from the Seattle area, the conversation fluctuated from representation to pandering to an audience to hiring practices, all while Twitter exploded with commentary from the audience.

This was the second #JournalismSoWhite event this year, with its first edition happening in April. The event aims to answer the question, “Where are all of the minority journalists?” posed by The Atlantic in a 2015 article.

A view from the audience of “Journalism So White”.

Starting off the evening was Editor in chief of the South Seattle Emerald, Marcus Harrison Green. He told an anecdote in which police killed a man, Michael Flowers, in Renton. The Seattle Times only mentioned he was a felon, while failing to note that he was a father, son and influence in his community. Green wrote a story about Flowers afterwards, highlighting the importance of having diverse perspectives in the newsroom.

The conversation began with the word “diversity.” Buhain explicitly said that diversity isn’t a special newsroom beat—it needs to be a part of everyday coverage. Jackson agreed that diversity goals are no longer serving their purpose, with most of the panelists saying that it has become a pointless HR term.

Seattle U first-year Political Science major Nicole Harrison was at the event. ”My favorite part was when they talked about diversity. The panelists all had things to say about the word diversity itself. They all thought that by using the word diversity, there is more separation between people because you are singling out a certain ethnicity.” Harrison said. “They all agreed that we should try to be inclusive of all ethnicities. I really liked that and I think that inclusivity is an achievable goal to set for our nation.”

The discussion then switched to an audience Q-and-A, in which the conversation got a bit derailed as infamous Town Hall interrupter Alex Tsimerman stepped up to the mic and invoked a Nazi salute. After quickly being thrown out by Cerna, there were two more questions by white males, before getting the question, “At what point are you writing for your audience, or pandering to them?”

Tyrone Beason basically dropped the mic when he answered, “We pander to white men every day and it’s called the news.”

Dana Ellis, second-year social work major who attended the event, added, “Hearing each panelist’s version of diversity forced me to further acknowledge that it’s about the impact of the word in today’s society, and how it’s used with a very broad and superficial meaning. That it’s not just about saying something, it’s about impact and action.”

The entire panel then agreed that journalism is biased—mainly because they as journalists pick the stories they want to write, then choose to highlight stories that aren’t often covered about people of color. Jackson added that she would rather admit to her biases and blind spots, rather than trying to remain objective.

At the end of the night, many people with questions had to be turned away due to time constraints, which infuriated a member of the crowd, Alia Kusumaningrat, a writer at The Seattle Globalist and iExaminer. She stepped up to the mic and made a speech saying that this is what happens when white men like Tsimerman take up space, leaving no room for women and people of color. She added later, “This is what happens when white people go first. No time to answer questions from people of color!”

Throughout the night we were reminded that journalism still has a long way to go in terms of diversifying both stories and staff. We heard it through thoughtful commentary, and saw it with how the event unfolded. These discussions are spurring the change—if you have a unique story or perspective, share it.