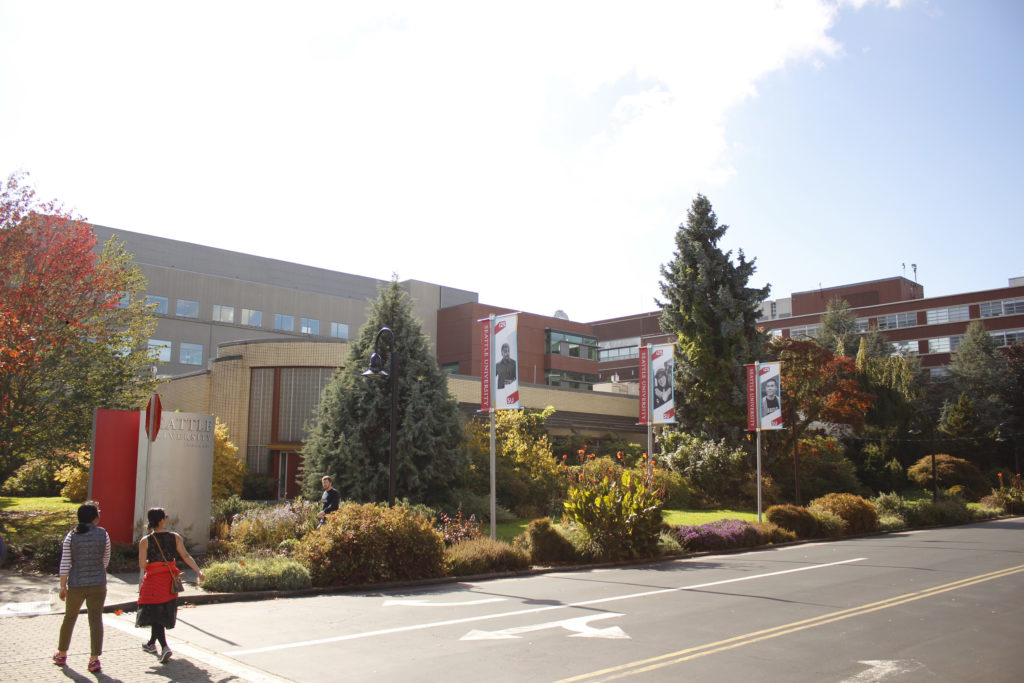 It should come as no shock that Seattle University is starting to feel a little tight around the edges. Admission has increased, and for two consecutive years freshman classes have broken enrollment records. As students feel the pinch in residence halls and classrooms, the college has been preparing a plan of action.

In mid 2019, the University Services Building will be torn down and replaced with the Center for Science and Engineering.

The 10 Year Facilities Plan, or 10YFP, is a road map for the University’s future which was recently approved by the Seattle U Board of Trustees.

“It will serve as a framework for new capital projects for the university for the next decade,” said Connie Kanter, Chief Financial Officer and Senior Vice President of Finance and Business Affairs. “It marks the first time the university has had a comprehensive facilities plan for capital projects, explicitly outlining priorities, timing and funding sources.”

Over the last three years, the 2013 Strategic Plan engaged with student representatives while it was in development at the SGSU and Graduate Student Council budget transparency forums last spring. With this, Seattle U began to formulate a tangible roadmap to future capital projects the school was keen on building.

Colleen Pike, Director of Planning and Real Estate, has been working on the 10YFP project since she first arrived at Seattle U from the University of Washington in 2014. With all the building occurring there, she’s familiar with what it takes to plan for the future of a campus bursting at the seams.

With all the planning to accommodate growth, it’s all hands on deck to steer the project and university to desirable outcomes.

Robert Schwartz is the Associate Vice President of Facilities and spearheads the campus’ buildings, grounds, maintenance operations and food services.

“Of the four key strategies outlined, the last was for infrastructure that supports the excellence of our education mission,” Schwartz said. “One of the things we had done as part of this was an in-depth student housing study, and it identified a need of at least 700 new beds primarily focused on upperclassmen.”

Behind Xavier Hall at 1107 and Madison Street is an empty lot owned by the University which will house the future student services center and offer eight floors of residences to juniors and seniors. At roughly 300 beds, they hope to break ground in April in order to be available to students for fall 2018.

“This is phase one of a three-phase plan for residence halls,” Kanter said.” Phase two will include another new residence hall for 350-400 students, which is likely to include an additional dining facility. Phase three will be the renovation of Campion Hall.”

1107 and Madison will be one of many “enabling projects” to relocate offices which are currently housed in the University Services Building, including the bookstore, the Department of Public Safety, Office of Research Services & Sponsored Projects and the University
Budget Office.

“Enrollment services is also in USVC (University Services building), and then will move to the first two floors of the new building. In fact, that will allow us to consolidate enrollment services, financial aid from the ADAL (Admissions and Alumni building) as well,” Pike said. “They’ll be consolidated on the first two floors of the new housing building. So that will be a nice student service to have all those in one building.”

The most significant growth in the 10YFP will be the new Center for Science and Innovation, which will add just under 100,000 square feet to the campus. In order to break ground on it, the old University Services Building must be demolished. Hence the term, “enabling projects.” Construction will start in mid-2019 once 1107 and Madison is finished. Bannan renovations will follow about two years later.

With so much money going to the new Center for Science and Innovation and a fourth Bannon Hall remodel, the building of more STEM facilities is a direction for the future.

“We’re not going to be what’s called an R-1 institution, like the UW, they’re research driven,” Schwartz said. “Undergraduate research is critical here, so our graduates are going to the top tier universities for their graduate work because of the great grounding they get here.”