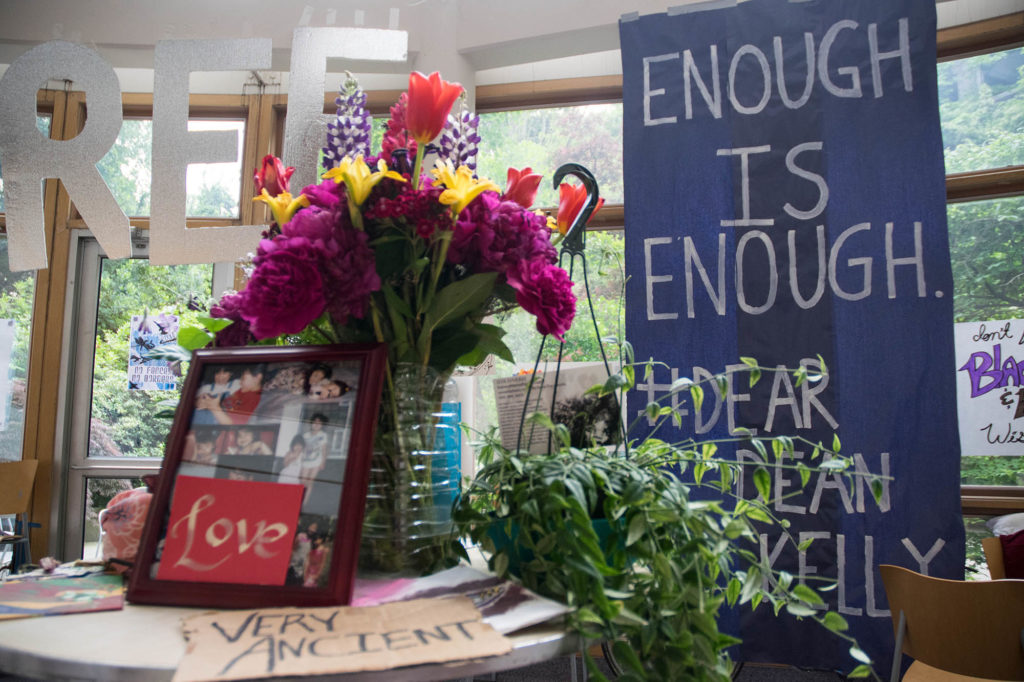 On Monday, day 13 of their sit-in protest at the Casey Building, the Matteo Ricci College (MRC) Student Coalition testified in front of Academic Assembly and presented two binders full of testimonies, emails and other documents detailing complaints against the college, some dating back to 2008. 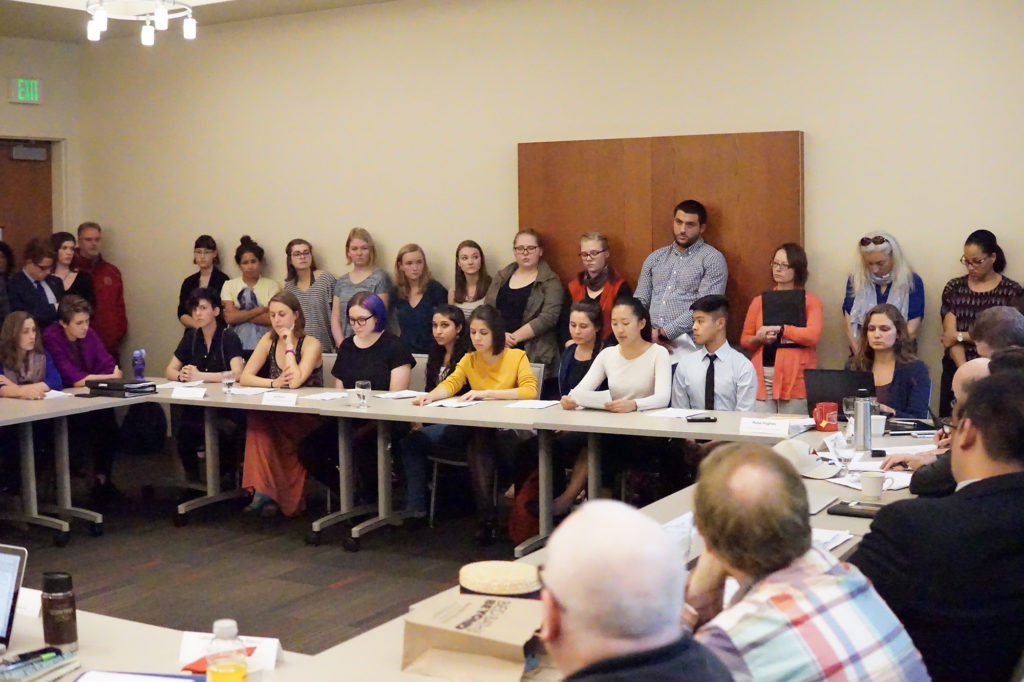 Four professors from the Matteo Ricci College also came forward at the Assembly—an elected body through which faculty make decisions related to academic and university-wide matters—to make known their own frustrations with the college, specifically highlighting instances in which they felt intimidated and threatened by “the leadership” of the college. They named their two most serious problems with MRC as “curricular” and “cultural.”

The professors shared experiences spanning from 2012 to the current year in which they felt “bullied, intimidated and silenced” by the MRC Leadership.

“After these types of experiences, we started to be very distrustful of any official channels for sharing our concerns. We began walking on eggshells. We learned that chances are good that if we speak the truth we will be punished for it,” the faculty members said in a statement at the Assembly.

In a series of emotional accounts of their personal experiences, the professors echoed many of the same issues raised in the MRC Coalition’s petition, “MRC Student Coalition Demands”—namely, that the climate of the college has made it difficult for its members to have a voice.

The accounts brought forward by the faculty and students on Monday illustrate a long history of attempts to work with the university to address these concerns.

Seattle University President Fr. Stephen Sundborg, S.J. explained the work involved in implementing change in the framework and structure of a university. He said that despite the current challenges facing the inclusion of all types of students both inside and outside the classroom, he believes that progress can be made through listening and learning from the community.

“The most important thing in all of this—more important than any dimension of Seattle U—is that every single student and every faculty person and every staff person at the university is treated as a person of dignity and treated with respect,” Sundborg said.

One of the demands outlined in the MRC Coalition’s petition is that professors within the college be given job security. Though there are professors teaching MRC classes who are tenured through other colleges on campus, no MRC faculty members are tenured by the college itself.

Jasmine Schwartz, a 2015 graduate of MRC and core member of the coalition, emphasized the importance of giving MRC faculty financial stability so that the college can improve its curriculum.

“Respect starts with the respect of faculty,” Schwartz said. “And I think it’s really unfair to professors that they have to engage with that worry and doubt and fear.”

One of the faculty members who testified at Monday’s Assembly, MRC assistant professor Emily Lieb, described the issues within the college as the result of a gradual shift in the types of students interested in attending Seattle U—and MRC in particular.

While MRC, in its early days, primarily recruited middle and upperclass students coming from local Catholic high schools, it now accepts a much more diverse population of college students from a variety of backgrounds. Lieb said this change in the student body should lead to a reevaluation of the college’s purpose and goals. 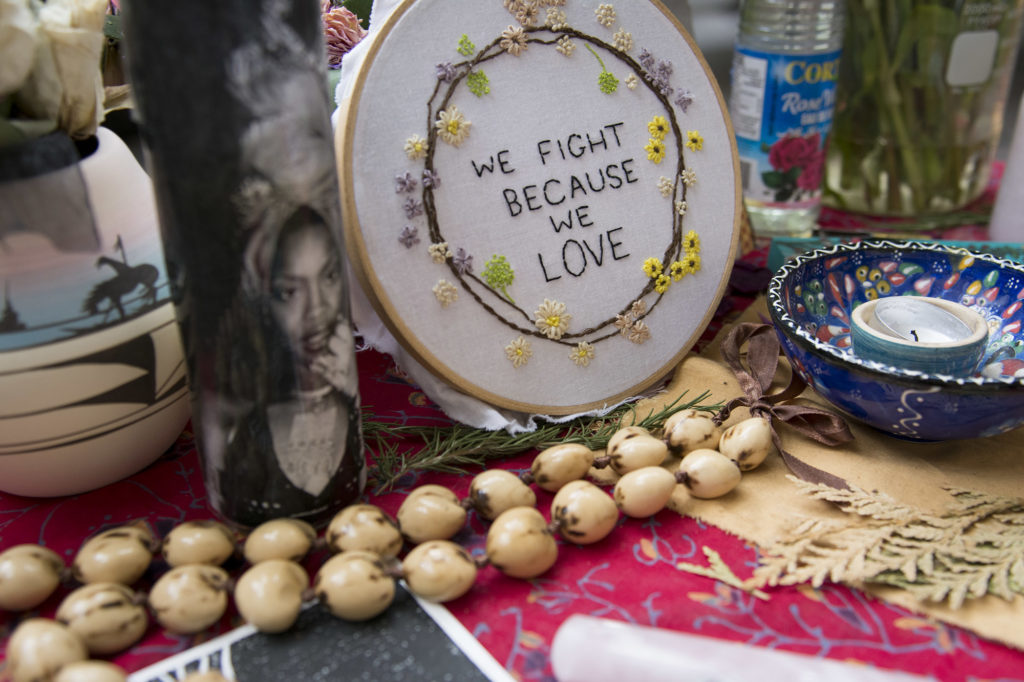 Altars in casey are filled with powerful women from all different races as well as and inspirational and supportive quotes.

At the Academic Assembly on Monday, faculty brought up the events surrounding a campuswide staff satisfaction survey in 2013 as an example of the hostile environment created at the MRC. The survey was conducted throughout the campus and based on qualitative responses from faculty and staff. The category with the lowest positive responses was related to “regular and open communication among faculty, administration and staff.” Lieb said that while most organizations would paraphrase and combine responses in a way that hid identities of respondents, such an action was never taken in the case of this survey.

“He [Provost Isiaah Crawford] did not say, ‘make these anonymous,’ he did not say ‘take this data and make sure I can’t see who said what’—he gives it to her [Kelly] on a platter,” Lieb said. “And so that’s not her, not only do they have this survey that they initiated and then ignored the results of, they also handed her a huge weapon to use against her faculty. There is blame to go around here.”

After the results were released, the MRC faculty were “berated” for their “betrayal of the college,” according to Lieb. She said she feels that while the results of the survey could have presented the college with an opportunity for growth, the leadership took it as a chance to single out and threaten those who showed dissent.

Lieb also said while she has not always been a target, and has had several “positive interactions” with Kelly, the fact that one of her peers could be treated in such a way by the leadership does not improve culture of MRC in any constructive way. For her, and others, it creates a climate of fear.

MRC faculty members are not the only voices in support of the coalition’s movement. Various groups from the university and wider Seattle community have come forward over the past week, including the Student Government of Seattle University (SGSU), the Center for Community Engagement (CCE) and the Seattle Pacific University (SPU) Justice Coalition.

On May 19, SGSU sent an open letter to the Seattle U community in support of the sit-in. Though the letter did not explicitly support the demand for Kelly’s resignation, it did affirm the coalition’s “organization, strength, and courageous vulnerability.” It also stated SGSU’s disappointment in the way Sundborg and the administration have responded to the sit-in.

SGSU President Mallory Barnes said she did not believe it would strengthen the letter to include support for Kelly’s resignation, and that doing so would alienate a large portion of the student body.

“The role of student government is to provide support, because if there is student activism happening and it is specific to something going on at this institution, we need to be aware of that,” Barnes said. “But it’s never our job to mitigate conversation or to wholly take a stance on one side of the issue.”

The CCE sent a letter to Sundborg, in solidarity with the MRC Student Coalition, on May 20. The letter explained that the efforts of students in the coalition have “reinvigorated” the CCE staff to meet their goal of creating a positive relationship between the university and its surrounding community.

CCE Deputy Director Rachael Steward said that she has spoken with community organizations in partnership with the university that have expressed their full support of the coalition’s movement. 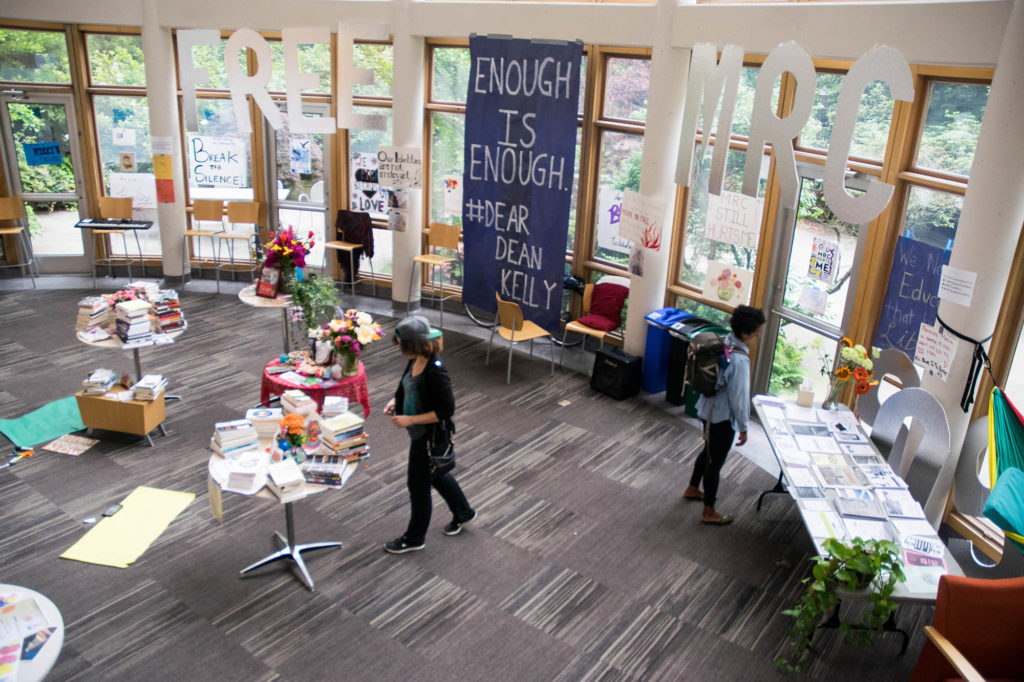 As of May 25, 2016 the MRC Student Coalition has occupied the Casey building for 15 days.

“Our students are showing that they are courageous and that they are coming together with other students, faculty, staff, external partners, etc. to be able to reimagine their future. They really are shaping and creating a just and humane world right here in the epicenter,” Steward said. “Our partners see that and they’re excited about it.”

SPU Justice Coalition formed in January of this year to promote racial consciousness and racial justice on the SPU campus. Members of the coalition have shown their support for the MRC Student Coalition since the protest began on May 11 by entering the space and taking part in the sit-in.

“One of the reasons why I keep going back is that when I’m there—even though it sucks why we’re all there—I’m in a place where I’m comfortable and where people get it. You don’t usually get that at universities,” said SPU senior psychology major Nakaira Petty.

Sundborg explained that although the feelings and experiences of students are valid and matter to the administration, concerns must go through the channels of due process to affect change. This includes filing a Title IX, or working through Human Resources to resolve personnel issues.

“What’s the proper way in which that could be carried out? It’s not an easy thing to work out in a university of 7,500 students and 1,350 faculty and staff,” Sundborg said. “But we can do better than what we’ve done.”

In their open letter, SGSU noted that the MRC Student Coalition has attempted several times to use the existing processes and procedures of Seattle U to address their problems, but that these channels have not been successful.

“The sit-in and occupation of the Matteo Ricci College office is a testament to the feeling that Seattle University has failed its students. This is not the time to continue using the existing processes and procedures,” SGSU said in their letter.

Though several organizations have voiced their support for the MRC Student Coalition, few have specifically supported the demand for Kelly’s resignation. 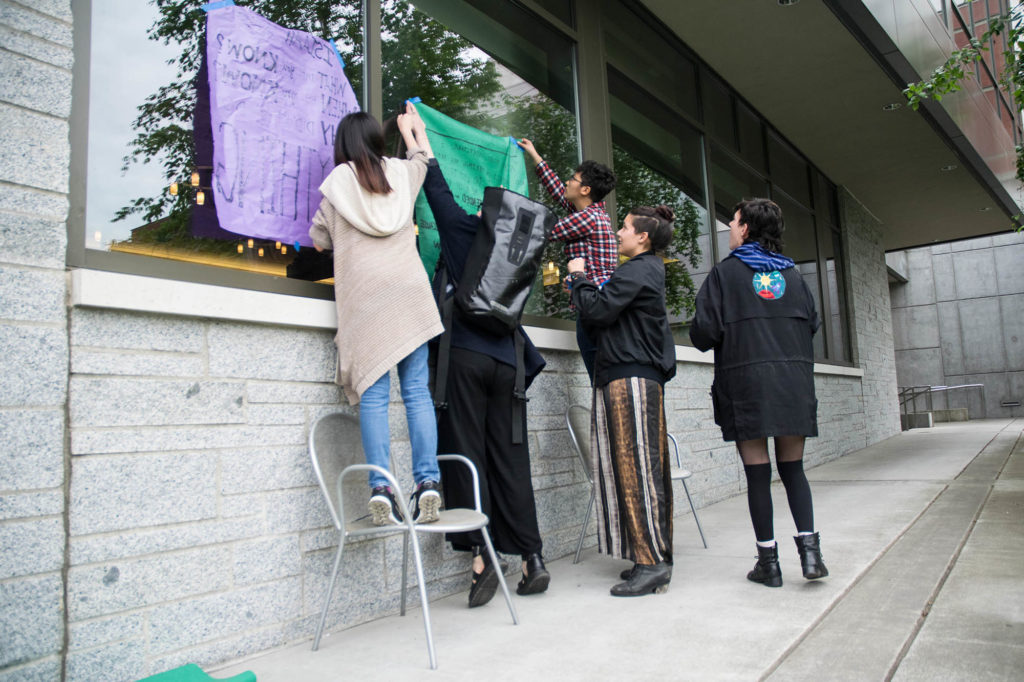 Lieb said she believes that the resignation of staff members on campus, particularly those in leadership positions, should not be based on public demand, but rather through due process—but only if that process can be trusted. Lieb believes the current process is broken.

“If you can’t trust that the things that you say will be sent to the provost in confidence are confidential, then that system doesn’t work. That’s sort of the point we were making [Monday], we were terrified, we are terrified. Every time we try to make change we are punished. That’s not a system that’s healthy, that’s not a system that works,” Lieb said.

She said that while the Office of the Provost and the administration are calling for grievances to be filed through Human Resources and the Title IX office, students in MRC have attempted to use these channels since 2008. Lieb believes that a history of mistrust and mismanagement have hurt the credibility of the university’s systems.

Sunborg said he does not know why it has taken Administration this long to respond to concerns that date back years ago, since they fall under the Provost’s jurisdiction. He also said there is no concrete plan for what will happen if the coalition continues their sit-in during the summer, but he hopes this issue will resolve before the end of the academic year. Sundborg said that the students occupying and protesting on campus are bringing forward valid concerns that will help the university grow, develop and build.

“Although the present situation is for many people difficult, for some people painful, for some people disruptive, and for many confusing, my own trust, my own belief is that we will be a better university because of what we are currently experiencing,” Sundborg said. “This is the way in which universities develop, change, grow, respond to the deeper needs of education to the students and the ways in which faculty and academic leaders work with them.”

The results from Monday’s Academic Assembly have yet to be released.