All Aboard The Mariner’s Hype Train!

After losing their first five home games to start the 2016 season, the Seattle Mariners appeared to be heading in an all too familiar direction. The team was 2-6 and the cynicism among the fan base was palpable, as it has been for the last 15 years.

On April 13, the Mariners led the Texas Rangers 2-1 in the eighth inning of their series finale, desperately trying to avoid losing all six games of the season’s first home stand. Then, Joel Peralta gave up a game-tying homerun to Delino DeShields, which prompted a collective sigh from Mariner fans. Forgive those of us that had little faith in the Mariners finding a way to score another run, given that the team had scored a total of only seven runs the previous five games combined.

The game would go into extra innings. With two outs in the bottom of the tenth, newcomer Dae-Ho Lee stepped up to the plate and crushed a Jake Diekman fastball over the left field wall, giving the Mariners a walk-off win and ending their five game losing streak.

I’m not sure if one swing of a bat in the second week of April is the sort of thing that can have lasting effects on a baseball team, but the fact of the matter is that things changed after that Lee homerun. The Mariners would go on to win 19 of their next 26 games and springboard themselves to the top of the American League West. And it wasn’t just the wins, it was how they were winning.

It was Robinson Cano hitting a three-run homerun in the top of the tenth to give the Mariners a 10-7 win against Cleveland on April 21.

It was the following night against the Angels when the Mariners again scored three in the top of the tenth, fueled by an RBI single from Franklin Gutierrez and a two-run homerun by Nelson Cruz.

It was May 4 against Oakland when they fell behind 8-4 and clawed their way back to win 9-8 on the strength of two Dae-Ho Lee homeruns.

It was the next night against the Astros when Cano hit a bases-clearing double in the top of the ninth to break a 3-3 tie and give the Mariners a 6-3 win on Cinco de Mayo.

Over the prior decade and a half, these were the kinds of games the Mariners would typically lose. Scoring runs, particularly late in games, was an area in which the Mariners had often faltered.

From 2009 to 2015, the Mariners ranked at or near the bottom of Major League Baseball in runs scored, batting average and OPS in the seventh inning or later. Here’s exactly how they stacked up against all 30 teams during that timespan: 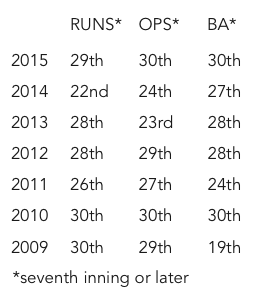 We’re only six weeks into this long season but the Mariners have thus far shown grit and tenacity not seen at Safeco in a long time. Will it last? Who knows. What I do know is that I’m putting my cynicism to bed and am encouraging all M’s fans to do the same. Here’s to hoping that at the end of this season we’ll all look back at Lee’s walk-off homer on April 13 as the moment that something
special began.