As they hurry from class to class students often overlook the yellow, squat, villa-style building tucked between the red walls of Xavier Residence Hall and the high windows of Hunthausen. Obscured by gardens, and off of the main traffic ways of our campus, this building is many things to different communities. 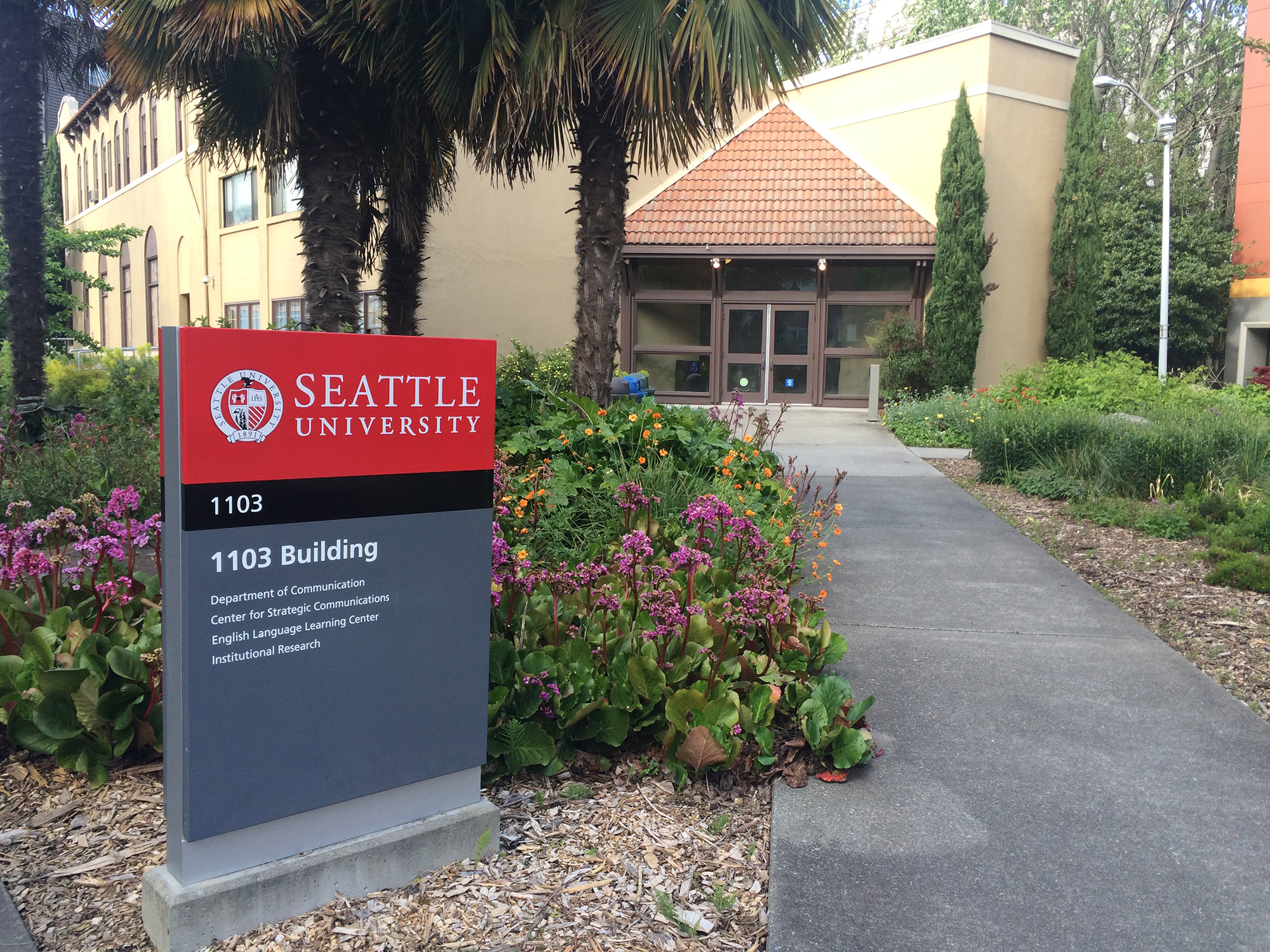 If you’re a communications student, you may know it as the building that houses your department. If you’re a commuter student, you may think of it as your “home away from home.” If at some point in your senior year of high school you took a tour of the campus, you may recall the giddy tour guide describing it as the place that used to be a mortuary. Or perhaps you’ve never even given this building a second glance.

Now, the building has a rather cryptic name on the sign out front: “The 1103 Building.” Its previous name has been taped over, erased, or blacked out—intended to be forgotten.

On the main floor is the former Lynn Collegium, now called the Commuter Link, which is a home away from home for undergraduate commuter students.

From 1981 to early 2016, the enigmatic structure was called the Lynn Building, its namesake being Gene E. Lynn.
In December of 2015, Lynn requested to have his name removed from the building. The university honored his wish, renaming the building after its street address. Lynn declined to comment on his reason for removing his name.
The name change has affected members of the former Lynn Collegium who had embraced the name as part of their identity.

“I think it’s mostly affected the people who have been here the longest. Having that name change was kind of a big deal for us, because we were the Lynn, so we called them the “Familynn,” Oshian Coates, electrical engineering junior and Commuter Link Community Assistant, said.

But this begs the question: Who is Gene E. Lynn? In short, Lynn is a man who donated significant funds to Seattle U at a time when the school desperately needed benefactors, and whose projects—which centered on helping the elderly and sick—helped shape Seattle U’s social justice mission into what it is today.

Lynn first joined forces with Seattle U in the early ‘70s, becoming a member of the Board of Regents. He then served on the university’s Board of Trustees from 1978-1985. In 1979, Seattle U purchased the Johnson & Sons Funeral Home, known now as the 1103 building. Lynn’s company, Careage, began remodeling the building in September of that year, pouring $450,000 (about $1.5 million in 2016 adjusted for inflation) into the renovations that converted the defunct mortuary into the School of Nursing.

This was the beginning of his years of giving to Seattle U. In 1981, Lynn donated $1 million to the School of Nursing to set up an interest-free loan program for nursing students who promised to work in rural areas for at least four years upon graduating from the university. Then again in 1990, through the money from Careage, Lynn opened the Bessie Burton Sullivan Skilled Nursing Residence, or what most of us know now as Chardin Hall.

Lynn was good friends with the university’s president at the time, Fr. William Sullivan, S.J., and opted to name the facility after Sullivan’s mother, Bessie.

Bessie Burton Sullivan, or BBS for short, operated as a nursing home from 1990-2007. Many Seattle U faculty and families stayed in the 139-bed facility. BBS was viewed as a win-win situation; not only did the residents receive great care, but School of Nursing students were also able to practice their clinicals there.

“I wanted them to experience the fact that old people are very vulnerable,” Matriotti said.

Matriotti said that the BBS facilities were very state-of-the-art.

In 2007, the university administration made the decision to close down BBS in the seemingly never-ending need for more space on campus. They argued that BBS was too costly to maintain, and that space could be better used as a residence hall. Over 130 elderly folks were forced to move elsewhere and 200-something BBS employees lost their jobs.

Some connection was lost with Lynn after the closure of BBS.

Aside from the closure of BBS, the School of Nursing, housed in the Lynn building, moved to the Garrand building in 1994, where it currently resides. The name “Lynn” remained attached to the 1103 structure.

In 2006, the building became what it presently is today: the Communications Department.

Though the name change seemingly erases the building’s history, Coates said she is excited at the prospect of new beginnings.

“[The name change] was kind of sad. But it is kind of cool to get to start over,” Coates said.

Rachel Betron is the Program Coordinator for Learning Communities and Innovation. She said that while Lynn did decide to remove his name from the building, it’s less important to speculate why, but more important to move forward with the changes.

“I think some of that [not knowing why] just comes from wanting to be in a place of respect for someone who has spent and given a lot to the Seattle University community,” Betron said. “So a lot of the reframing we did here was less of ‘Why would the name change?’ but rather, ‘How can we take advantage of this to make sure that the students who commute to Seattle University have the opportunity to name and claim something that makes more sense to them and their identity,’” Betron said.

While we may never know why Lynn decided to break from Seattle University, his now taped-over legacy is one that deserves respect and remembrance.