The Friendly Faces Behind our Beautiful Campus 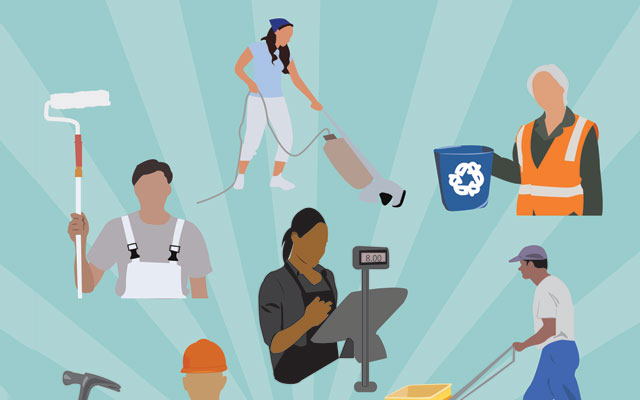 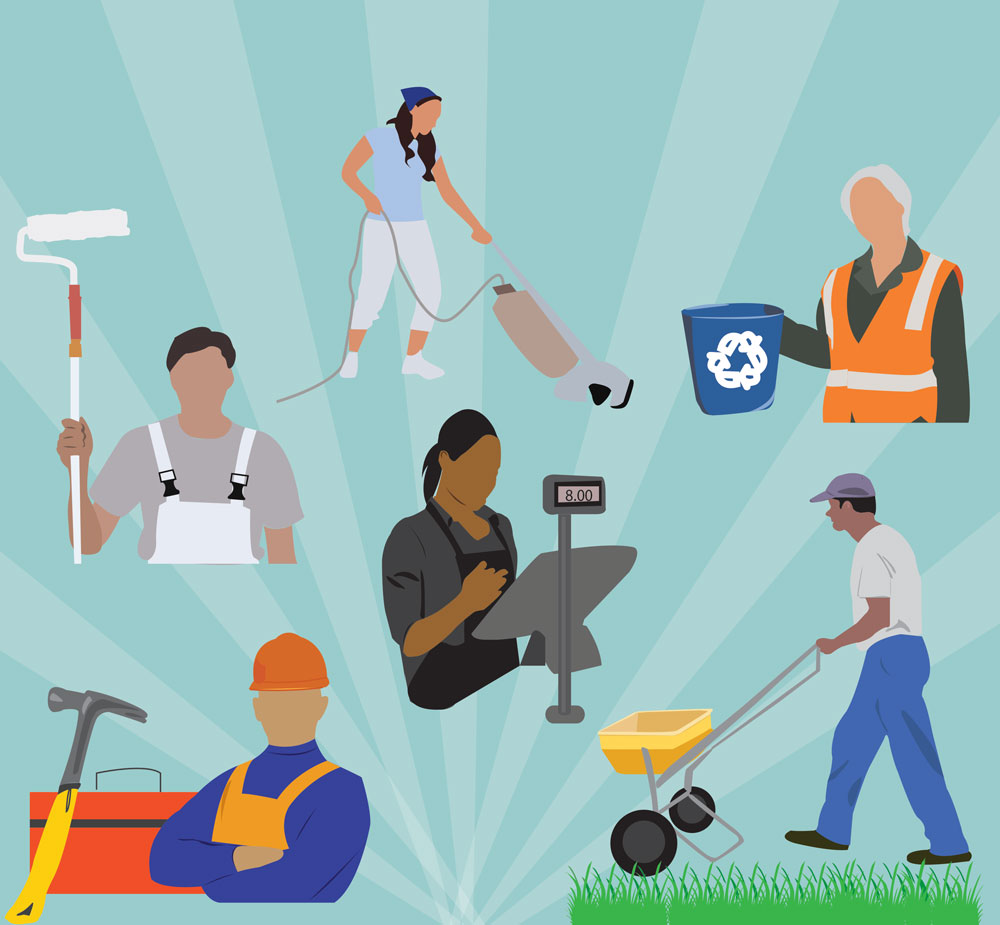 Illustrated by Lorna McDonnell • The Spectator

Seattle University is full of ambitious students and professors, rushing from class to class and doing more than they can with the little time they have. What they often forget in the flurry of their own haste, is that their lifestyle wouldn’t be possible if it wasn’t for the tireless work of the Facilities Services staff.

Seattle U employs a small army of workers. From the maintenance and custodial staff to the mechanical and electrical shop, from the groundskeepers to the workers at Bon Appetit, from the directors to the managers, assistants, engineers, technicians, carpenters, locksmiths, painters, the recycling coordinator and the vehicle mechanic—all of these essential members of our campus community work long hours to make sure everything runs smoothly.

“What we strive for is that the campus remains comfortable and beautiful,” said Lara Branigan, Director of Design and construction. “We want this to be an inspiring place.”

To some of us—most of us, I would venture—these people remain strangers. Some we never see and with others we have difficulty finding a chance to introduce ourselves. In our rush to get food, we rarely make time for conversation with the cashiers at Cherry Street Market. The groundskeepers are busy pulling weeds or mowing grass. The maintenance workers are in and out of our dorms in a matter of minutes—even for those silly work orders to bunk our beds so that we have more room for activities. The custodial staff often do their work in the quiet hours before sunrise when we’re all comfortably asleep.

“Our people don’t really like the limelight,” said Robert Schwartz, Associate Vice President for Facilities Services. “We work really hard so that [students] don’t have to see the work we do.”

But that’s no way to pay thanks to those responsible for making our campus life possible, which is why this week’s centerfold is dedicated to the staff—every single one of them—for all of the long days and even longer nights they spent demonstrating their selfless commitment to this institution, to try to make up for every time a student or professor passed by without a single word of appreciation and to celebrate in full view the color, character and charisma they bring to this campus. 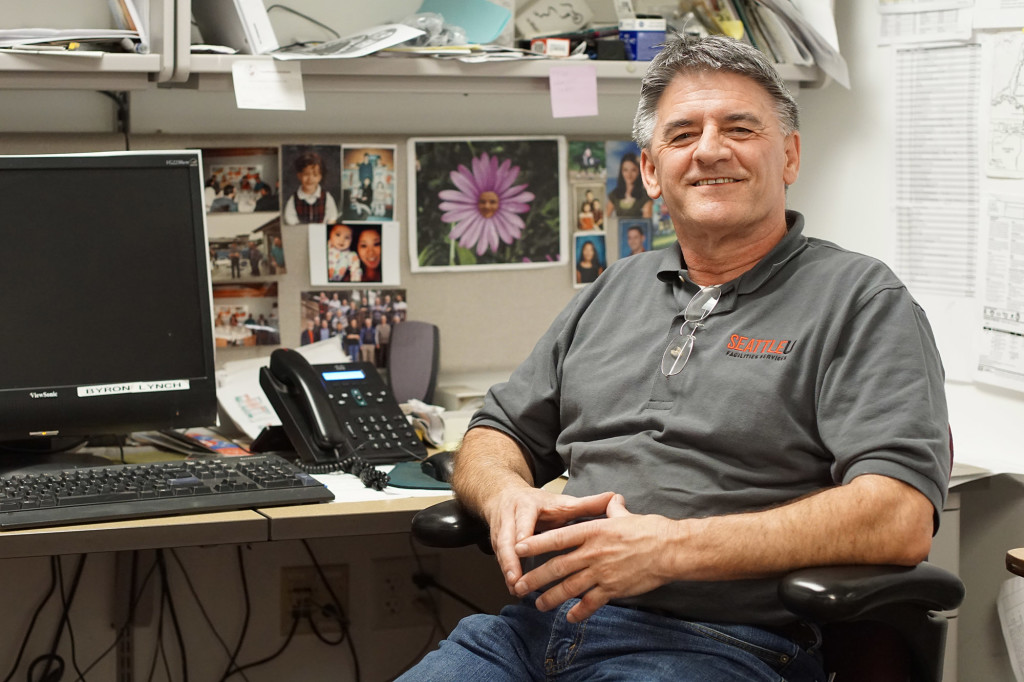 Byron Lynch sitting in his office in the electrical shop.

Byron Lynch has been at Seattle U since 1978—to put that into perspective: President Fr. Stephen Sundborg, S.J. became president in July 1997. Before he became an apprentice in the electrical shop, Byron studied sociology as an undergraduate here.

Lynch’s son Ryan currently works in the carpentry shop here. His wife is a teacher and, because of the tuition remission he receives for his job, the two of them have been able to provide their four children with access to higher education.

A few years after he graduated in 1973, he was offered a position in the shop. He was the lead electrician until a few years ago. Now, as he puts it, he helps plan things while others do most of the wrench work.

Lynch added that, although the pay isn’t great, he enjoys his job.

“There has to be a reason somebody wants to work at a place like this.”

Evidently, Lynch’s reason is a good one. 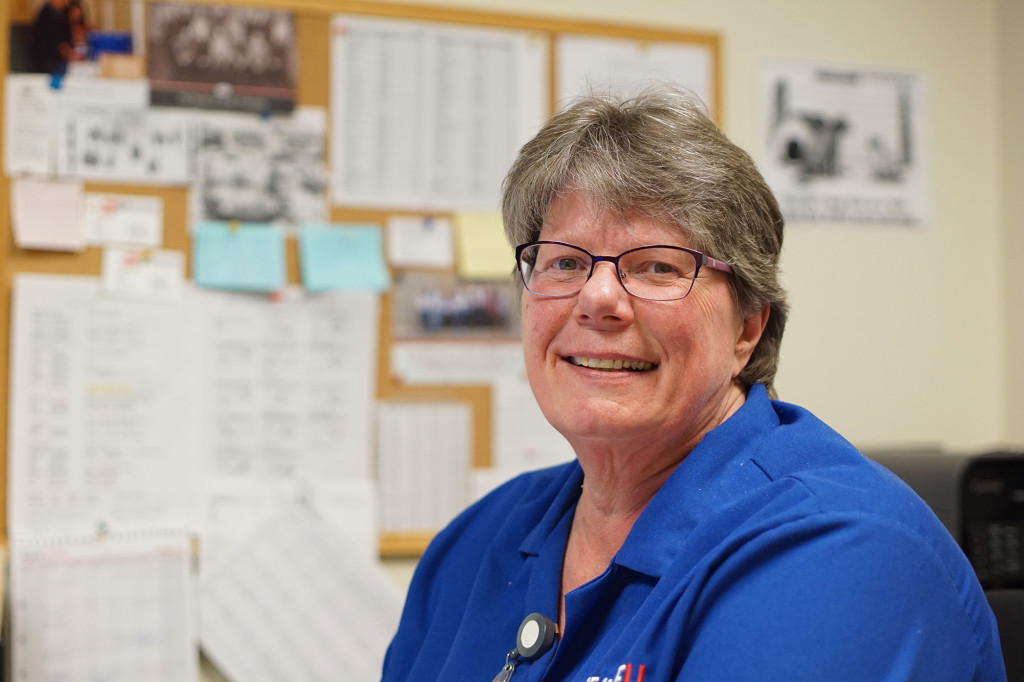 Lynn Erickson has been working here for 13 years

Lynn Erickson is known by many residents as perhaps the friendliest soul on campus. She began working at Seattle U in 2003 and took over as lead of the Residence Hall Custodial Staff last March. Since then, she has worked to ensure that Bellarmine and Xavier are in top shape at all times. She brightens the hallways with her signature smile. Her motto: if you see someone without a smile, give ‘em yours.

“It works most of the time,” Erickson said. “I’m a people person. I always say good morning to everybody.”

Though she enjoys her job, Erickson admits that it can be challenging at times. She recalled a room in the Murphy apartments that she once had to clean. It was a nasty affair, she said. The room, previously occupied by four boys, was filled with stacks of pizza boxes and beer cans piled high from wall to wall. On top of that, the sink was full of moldy dishes that started to stick to each other.

“You couldn’t have gotten another [box or can] in there,” she said.

At Seattle U, Erickson works closely with a wide variety of people. Her diverse coworkers hail from places like Korea, Vietnam, Spain and Sudan. She also meets students while she’s working, many of whom show great appreciation for what she does.

“It’s nice when they notice, and they do notice, for the most part,” Erickson said. “It makes me feel good.” 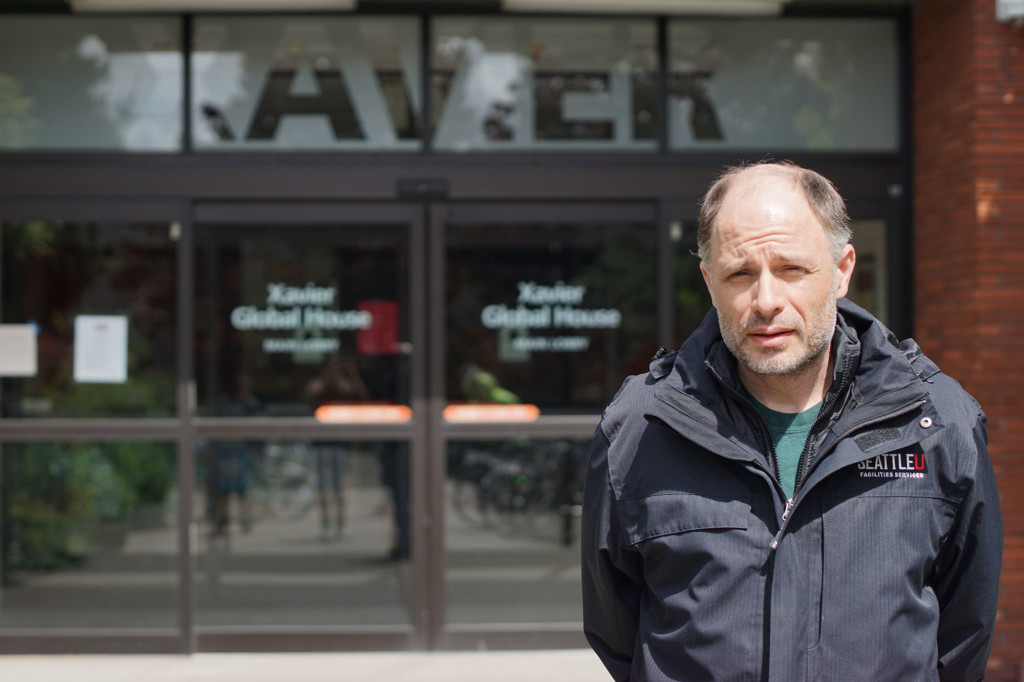 It’s likely that only Xavier Global House residents will know Greg Felton. He’s been a part of the maintenance staff there for 16 years. He said summer break is the busiest time of the year since he goes through every room repairing furniture and appliances. During the year, he also changes locks and carries out work orders.

Felton used to work in construction. Looking back, he said, he can’t complain about his job at Seattle U.

“You have jobs that are poisonous,” Felton said, recalling his last job. “SU has a good working culture. It’s an enjoyable job. The people I work with have been here for years. They’re nice and willing to help you out.”

Felton was born in Seattle. His ancestors have lived in this area since the 1840s. He has two brothers, one younger and one older, and his daughter went to Seattle U a few years ago and, incidentally, lived in Xavier Global House.

When he gets off work, Felton heads home,makes a cup of coffee and plays guitar for a bit. Playing guitars is one of his favorite hobbies, but he also likes to make them, too. He’s built roughly 20 guitars, all from scratch. He wants to convert his garage into a workshop but he doesn’t think he’ll have enough room, what with all the equipment and saw dust lying around. Plus he wouldn’t be able to park his car, but that doesn’t seem to be a deciding factor for him.

A few of his favorite guitarists are Eric Clapton, Jimi Hendrix and Carlos Santana. 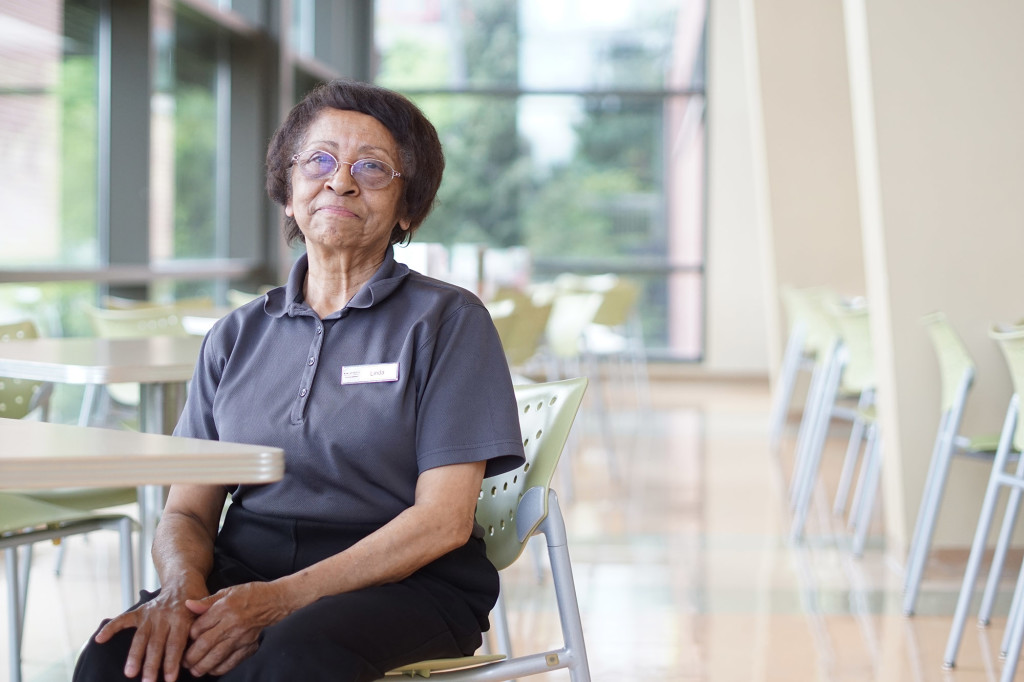 Most of us know Maria Lindomar Da Silva Robinson by her nickname “Lynda.” Most of us don’t know that she came to our campus in the spring of 1965. It’s hard to imagine all that has changed at Seattle U—or in the world—since her arrival, on top of all the different people she has met during her time here.

Robinson was born in Recife, the capital of Brazil’s northeastern state of Pernambuco, on October 23, 1941. She knew her mother and siblings but didn’t live with them and was raised by her grandparents. At 12 years old, when her grandfather became sick, she was withdrawn from school to help support the household. Lynda worked as a housekeeper for a military family in Rio. Each day she rode a plane to and from the city and usually got home late at night. Her childhood was anything but easy.

“I had to raise myself,” Robinson said. “I had to quit school and go work for the rich people. It’s not easy but it can be done. Some things I had to learn the hard way.”

In the ‘60s she followed a nuclear engineer and his family from Brazil to New York City, then to Chicago where she worked as their maid for a year before the engineer was transferred to University of Washington. Another year later, when the family was going to return home, Robinson chose to stay in Seattle where she saw a better future for herself.

“I don’t regret the decisions I made. It was exciting, being young and foolish,” she said, speaking of the time she spent in those American cities. “I didn’t like being a maid. I didn’t like being poor. I knew I could do better. Here you have possibilities.”

Now, Robinson lives with her daughter, her daughter’s fiancé and their three kids in Bellevue. Lynda has four kids and 12 grandchildren. She recalled extensive details about each of their lives as we talked, including all of their birthdays, where they live and what they’re doing with their lives, even what sports the young ones play at school.

When she gets home, her grandchildren rush to greet her with big smiles and they ask her, “Grandma! How was work?”

“Everyday is business. I know what’s coming,” Robinson said. “You don’t sit around or walk around, you work.”

At home, Robinson helps keep the house in order to make things easier for her daughter, who is in nursing school. Lynda likes to spend time with her grandchildren, most of whom are still in primary school. On campus, she works the register at Cherry Street Market where hundreds of students file past her every day.

“Life is an endless journey. Sometimes we live long, sometimes we don’t,” she said. “If you don’t learn something, you’ll be lost in time.”

At Seattle U, staff members of the facilities services strive to create an inspiring and comfortable campus. Those who benefit from this high standard of living—students, professors and administrators alike—can show their appreciation with two simple words: thank you.