An open letter in response to Dean Kelly’s letter, “The Single Greatest Challenge to Our Community,” published in the Spectator in May 2014.

At the Second Vatican Council, Father Pedro Arrupe insisted that if individuals and communities are not actively resisting unjust structures, they are complicit in injustice. As the Dean of a college that advertises its Jesuit underpinnings every day, we are sure you are familiar with this statement.

So, why, Dean Kelly, have you been one of the most adamant voices on this campus against a living wage? Against the chance for your staff to make ends meet in America’s fastest growing city? Why have you constructed false dichotomies about cost and burden in order to silence your staff and confuse your students?

In the open letter you wrote, published in the Spectator, you stated that “students will bear the cost” of unionization. Right now, the students are bearing plenty of costs, few of which are benefitting our community. As the Seattle University Office of Institutional Research reported in 2011, Seattle University only spent 53 percent of its budget on instruction costs. With the unveiling of Phase I of the 2006-2016 Facilities Master Plan, it is clear what Seattle U is prioritizing. Our community refuses to accept why the expansion of the university is more important than its people. Similarly, it is not difficult to imagine that the legal fees for blocking faculty unionization are much more than most professors make in their annual paycheck. 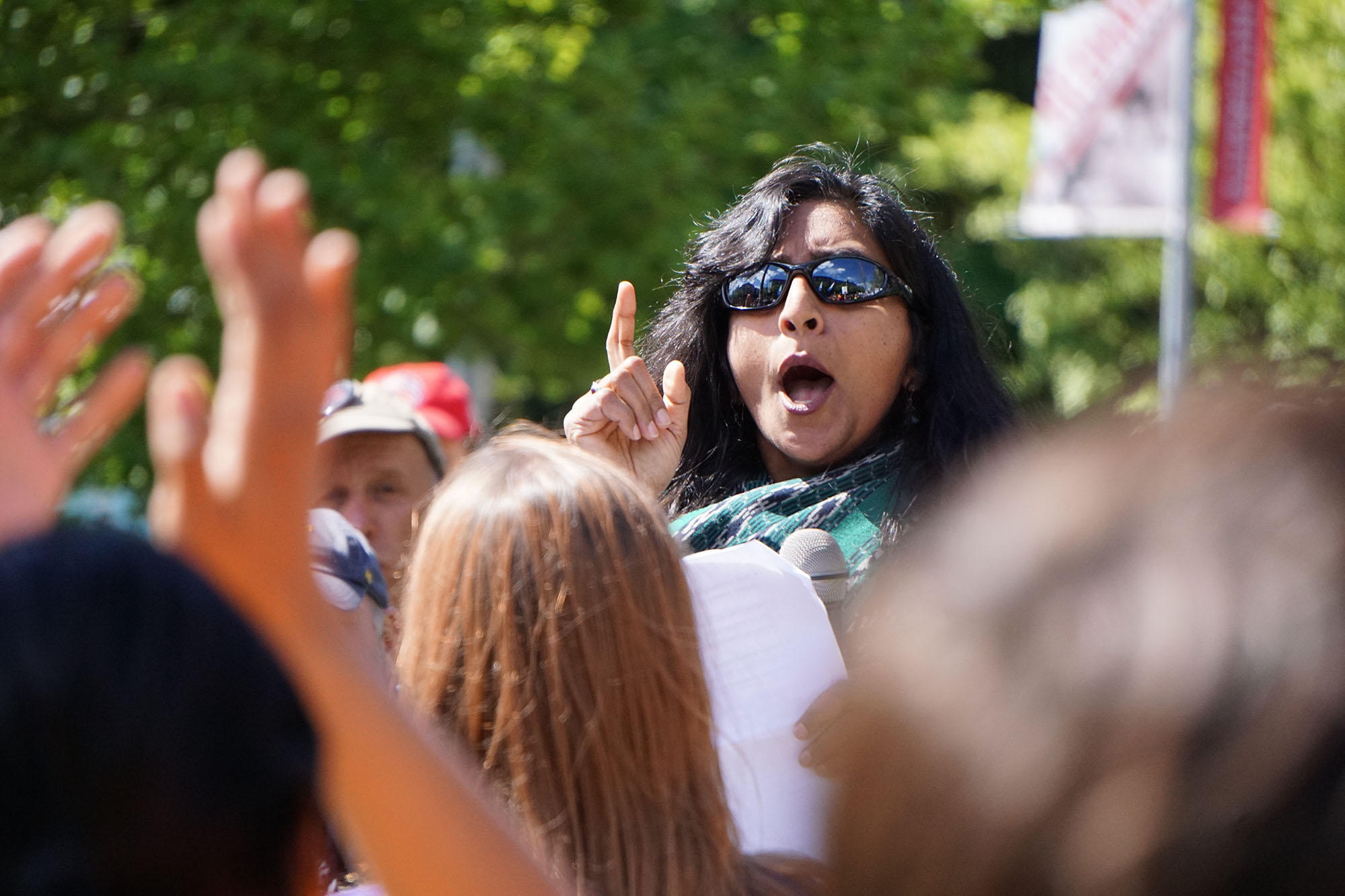 City Council member Kshama Sawant sets the intensity level high with her moving speech at the Bell turnaround at the Fast for Justice.

In 2014, you wrote that adjunct and contingent faculty reap “unimagined benefits” from their teaching. But what seems more obvious is their unimagined frustration and stress from the lack of benefits and job security that this institution fails to provide. SEIU reported that one adjunct faculty member calculated his salary equaling between $8-10 per hour in 2011. Our professors are paying the emotional, mental, spiritual, physical and economic costs of not having a job provide adequately for their livelihood.

You wrote that the compensation for our contingent faculty is average, but this does not mean that our just and humane mission is achieved and settled. When you argue that our adjunct faculty members are compensated at the same level as other universities, we know that it’s a cop-out. We know that claiming parallelism justifies inaction. Seattle U students are not satisfied to continue to pay for disposable faculty. If Seattle U professes a social justice mission, inaction and distraction are not options. We should be holding institutions across the country accountable to just treatment of all employees on campuses—including our own.

We are not distracted by your claims that students will buckle under the weight of unionization. For the record, we are not confused. We know that when our professors are not compensated for their work with a living wage or a supportive working environment, everyone suffers. When our professors aren’t sure how they will pay their rent, their medical bills, or save for retirement, the entire university loses.

With the advocacy of unionization, faculty can know why their contracts are not renewed. The obscure and intimidating system becomes transparent. A healthy campus is one where questions can be asked, systems can be interrogated and contrary issues can be named.

In your letter, you wrote that faculty signed up for a two-tier system that situates tenured professors above adjuncts, yet there is nothing humane about hierarchy. Pedro Arrupe makes it clear that a system that elevates one group while suffocating another is unjust. Capitalism and white supremacy operate systems of fundamental inequity, enforcing the ideology that people can be disposable. While the Campus Climate Survey revealed the university’s deep-seeded issues of intolerance and exclusion, Matteo Ricci College only employs two professors of color, refuses to tenure any of its faculty, and rejects unionization. This is not what a just and humane Matteo Ricci College looks like. If Matteo Ricci claims to be a progressive, exemplary and experimental college with creative freedom, it has a responsibility to hire and support exceptional and revolutionary faculty who are uncensored and unintimidated. This is a tried and true method of liberation, not only for faculty as individuals, but for their students, their colleagues and this campus.

As students who are actively striving to create a just and humane world, we demand that you hire and tenure professors of color and LGBTQ professors who are invested in advancing our minds and challenging the status quo. Seattle University students are worth investing in, and so are its faculty members. It’s time to walk the walk, Dean Kelly.

On Thursday, April 14 our community gathered together to fast, speak and march, demanding a union contract for adjunct faculty. Though the speeches and rallies ended, the movement will not stop and the students will not forget. The class of 2016 will graduate, but next year students will still be fighting. We will keep showing up, speaking out and agitating for a just and humane world to start here.

In Resistance and Solidarity,
The MRC Coalition

The MRC Student Coalition may
be reached at
[email protected]