Student life revolves around three ideas —school, work and friendship—and at Seattle University, three students are working to combine these ideas into a special event. Alexis Rodriguez (entertainment chairman), Danicole Ramos (logistics chairman) and Kylie Teramoto (ballroom chairman) are leaders of the Hui ‘O Nani Hawai’i Club at Seattle U and spearhead the Lu’au’s organiztion. This year’s Lu’au will be held April 30 and tickets have already sold out. Rodriguez, Ramos and Teramoto have put all their passion into this event and have endured months of phone calls, emails, dance practices and meetings to make the event as good as possible.

“All my blood, sweat, and tears go into making this event,” Rodriguez said.

When asked about the behind-the-scenes organization of the event, Ramos and Teramoto laughed in unison.

“There is more to it than just flowers and food,” Rodriguez said.

“It’s not just putting on a big, high budget, stressful performance. There is a meaning to it,” Ramos said.

According to the club’s mission statement, Lu’au is the main way Hui ‘O Nani Hawai’i creates a home away from home for many of Seattle U’s Hawaiian students. It is a way to alleviate homesickness, especially for those who left home for the first time when they came to university, Ramos said. Parents get to see their children perform and many alumni come back for the event. The event remains the best way for Hawaiian students to come together and celebrate culture at Seattle U. The Lu’au also serves as a way to share Hawaiian culture with students who are not from Hawaii. “It has helped the school’s mission of becoming more diverse,” Ramos said.

This year especially, the club has been successful in furthering that goal. There will be 30 hula dancers at the lu’au—a surprising number compared to past years, though the increase could be explained by the fact that 10 percent of this year’s dancers are not from Hawaii. Nevertheless, the event is growing in popularity.

The theme for the Lu’au this year is, “Vibrant people, thriving lands.” The theme hints at one of the state’s contemporary problems, namely, that native Hawaiian land was proposed as the location of the Thirty Meter Telescope.
TMT is a proposed astronomical observatory with a large telescope that has caused controversy over its planned location on Mauna Kea, a dormant volcano that holds cultural significance because of its massive height. Many Hawaiians feel that the construction of TMT on Mauna Kea would be detrimental to the state’s cultural health and have successfully blocked TMT’s construction with protests.

According to Teramoto, Lu’au’s theme gives substance to the event because it promotes the relationship between a people and their land.

“[The theme] contextualizes what we are doing,” said Kylie Teramoto, the ballroom chairman.

“It’s [a] conflict of [state advancement], but also preservation of our culture,” Ramos added.

For entertainment, expect there to be a lot of hula dancing. In Hawaii, there are two main variations of hula dancing, Kahiko and Auana. Kahiko is a more traditional type of hula. ‘Auana is a more contemporary style of dance seen more often today. 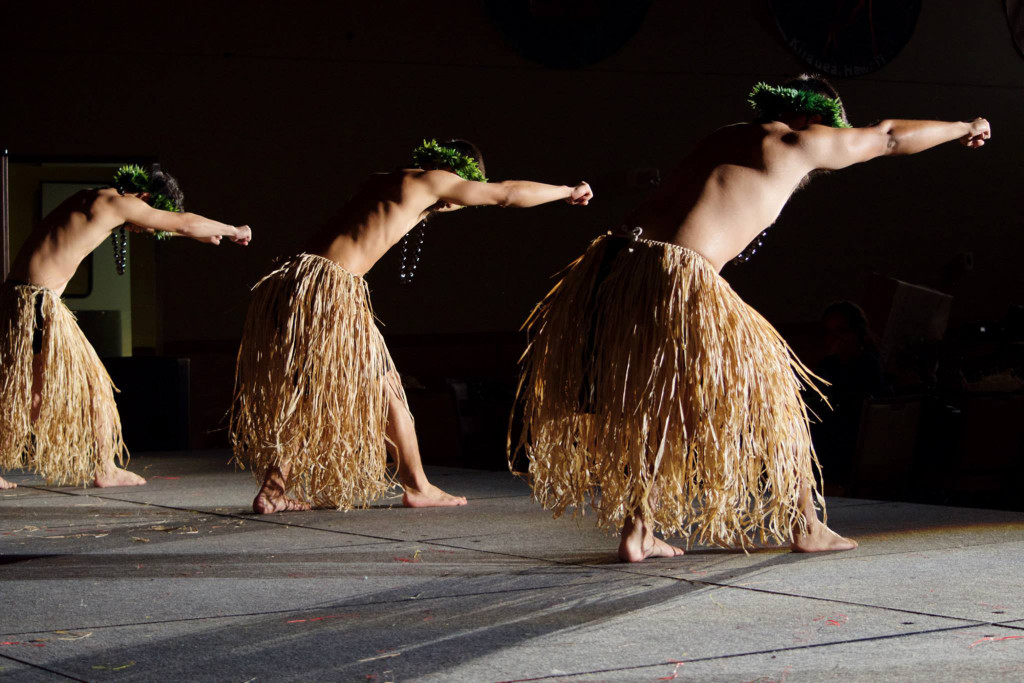 “The purpose of hula, in a more traditional sense, has always been to tell a story. Kahiko touch on legends, so they talks about our old gods,” Rodriguez said. ”Our contemporary dances are a little more upbeat, those also talk about beautiful places.”

Dancers will present both Kahiko ‘Auana as well as Polynesian dances, such as a Samoan dance and the Haka, a dance native to New Zealand.

Sometimes, the planning winds up being the best part of the process.

“I really enjoy our delirious conversations we have over the phone at midnight,” Rodriguez said. All three organizers smiled.

“I love doing this job, I enjoy it. It’s what motivates me to actually keep going at school,” Ramos said. “We love each other.”

They look forward to sharing a part of their culture and history that is close to their heart with those
who come.