The voices of students and faculty alike echoed throughout campus as they came together to sing “Divest, divest, we are not powerless,” at the Sustainable Student Action (SSA) Divestment’s Not Dead Rally. 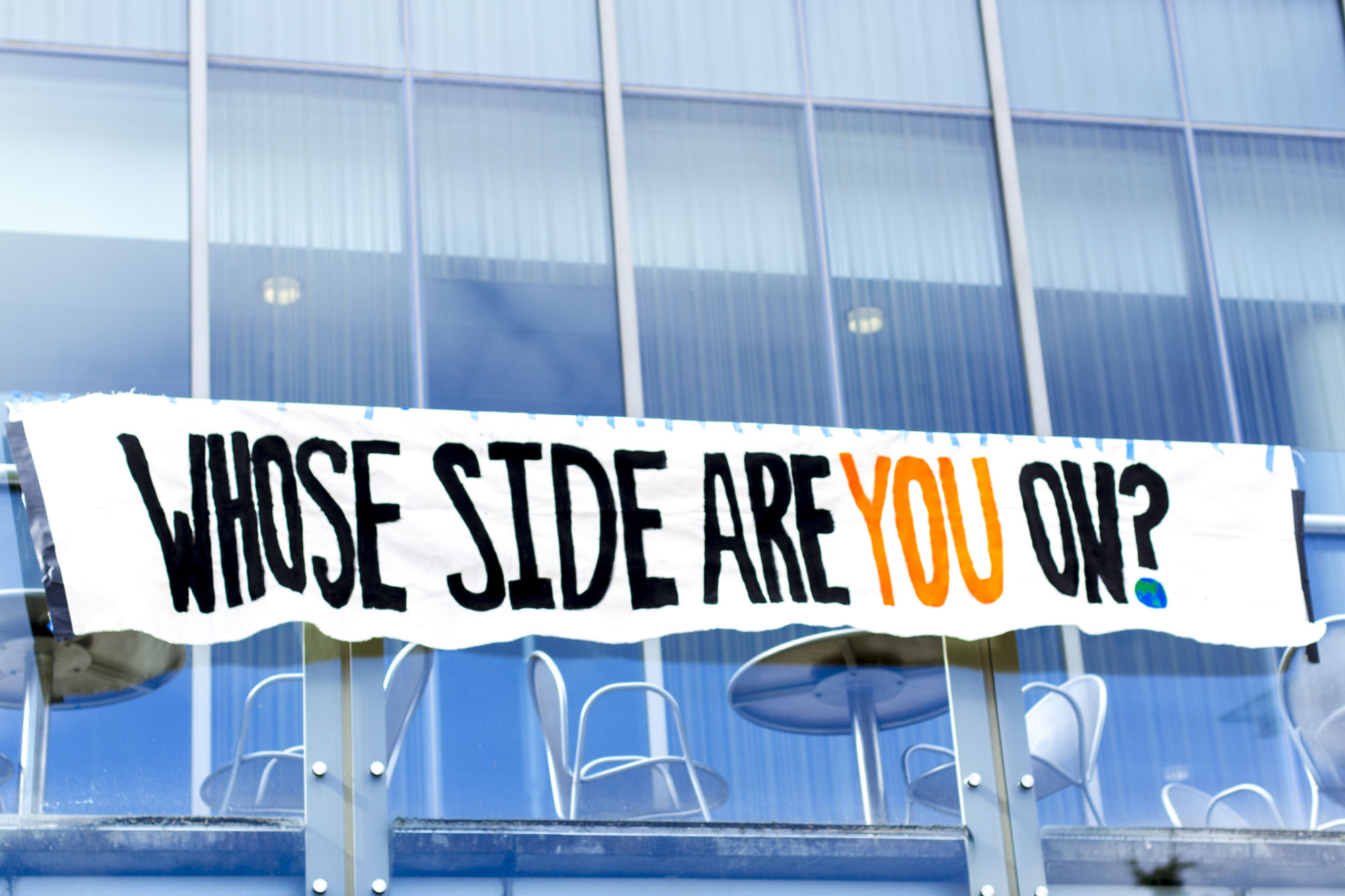 This rally on March 3 aimed to send a message to Seattle University’s Socially Responsible Investments (SRI) Task Force that students and staff want them to recommend to the Board of Trustees that the university divest from fossil fuels.

The Task Force released a statement on Feb. 2 that states while they would potentially recommend not committing to any direct investment in fossil fuel companies, they might not recommend divestment of pooled or commingled funds.

Third year sociology major and SSA member Katie Furlan thought that this rally was a good way to reintroduce SSA back to campus and show the progress that the group is trying
to make. 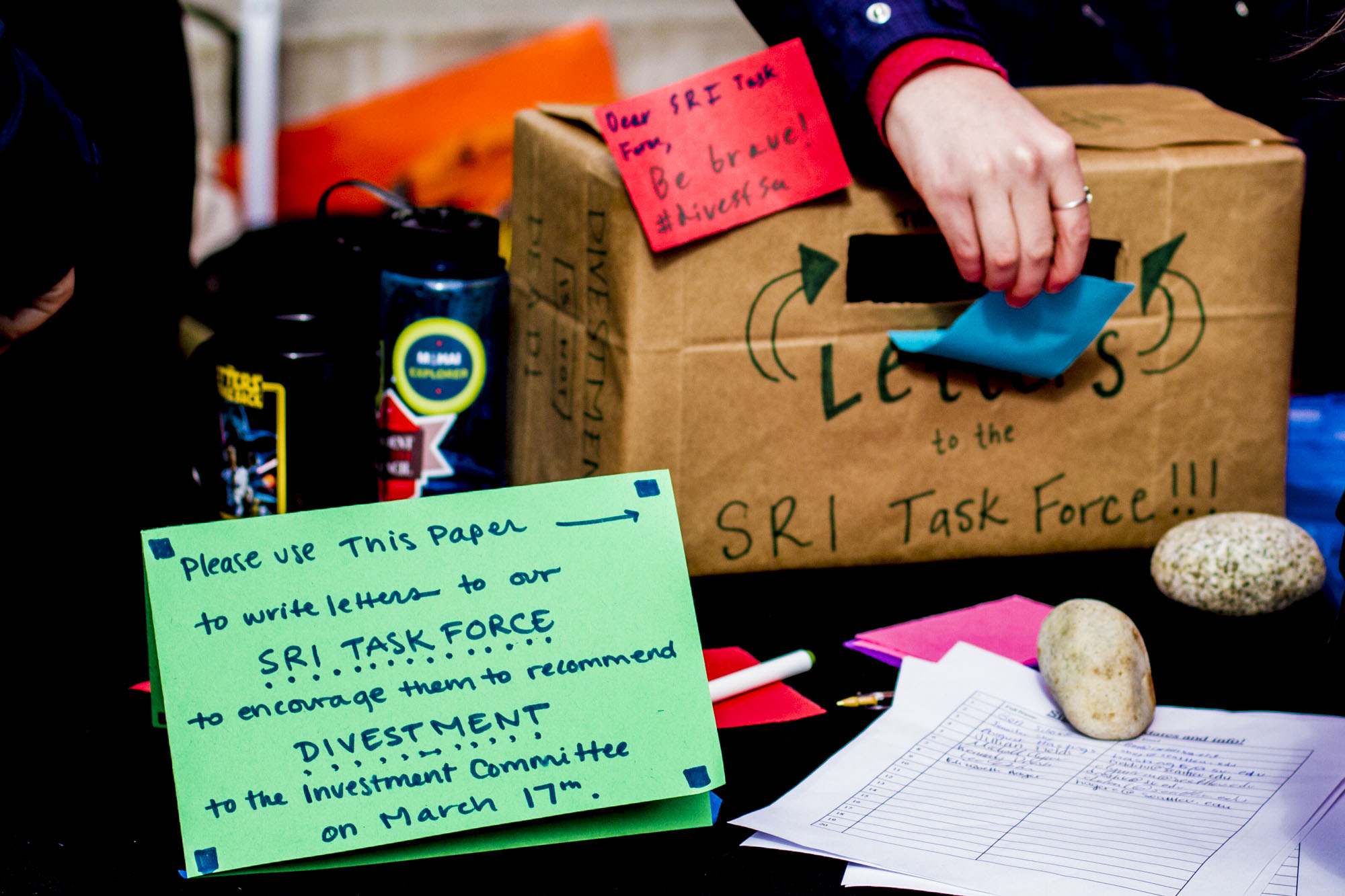 The movement to divest began years ago amid growing concerns of climate change. After a divestment rally in May 2013, SSA presented President Fr. Stephen Sundborg, S.J. with a petition that asked the university to divest—which he neither signed nor endorsed. After this petition, the Student Government of Seattle U (SGSU) approved a resolution and proposed timeline for Seattle U to freeze any new investments and sell all direct holdings within three years. The administration formally responded in Feb. 2014, stating that it was not currently prepared to divest but was willing to engage in further dialogue with SSA.
This further dialogue came in the form off Sundborg’s creation of the SRI Task Force in March 2015. According to a public statement by Sundborg, the Task Force was established in order to “consider how we might more fully realize our commitment to investing endowment funds in socially responsible entities and purposes.”

“By not divesting our funds that are in fossil fuels, not only are we not leading the movement to divest, we are being silent benefactors to a system that hurts marginalized people across the world,” Furlan said.

Students got the opportunity to speak at the rally, many saying it was hypocritical of Seattle U to invest in fossil fuels while also having a commitment to social justice.

“Despite the squeaky clean surface of solar panels and responsible eating practices, behind the scenes our university is hardly as blameless. By investing in fossil fuel corporations, Seattle U is perpetuating a double standard of what they see as just,” said freshman biology major, Rachel Levelle.

This sentiment was widely echoed among the attendants.

“It’s very hypocritical that the university invests so much money into something that is directly destroying the Earth when we try to be ethical,” said freshman international studies major, Rachael Hill.

Attendants also thought the university could better adhere to its social justice mission.
“Our university speaks a big game about being socially responsible and I think they should prove it through actions rather than just talking,” said sophomore environmental science major, Trevor Ka’aihue.

The city of Seattle was the first city in the nation to divest its cash pool from fossil fuel companies in 2013. In 2015, the University of Washington divested from thermal coal.

Ka’aihue feels that Seattle U needs to take this gradual step towards divesting from fossil fuels.

“It is a step in the right direction,” Ka’aihue said.

The final decision by the SRI Task Force will be made on March 17. SSA hopes that by showing the power of student and faculty voices, the rally will persuade the SRI Task Force to recommend full divestment to the Board of Trustees.