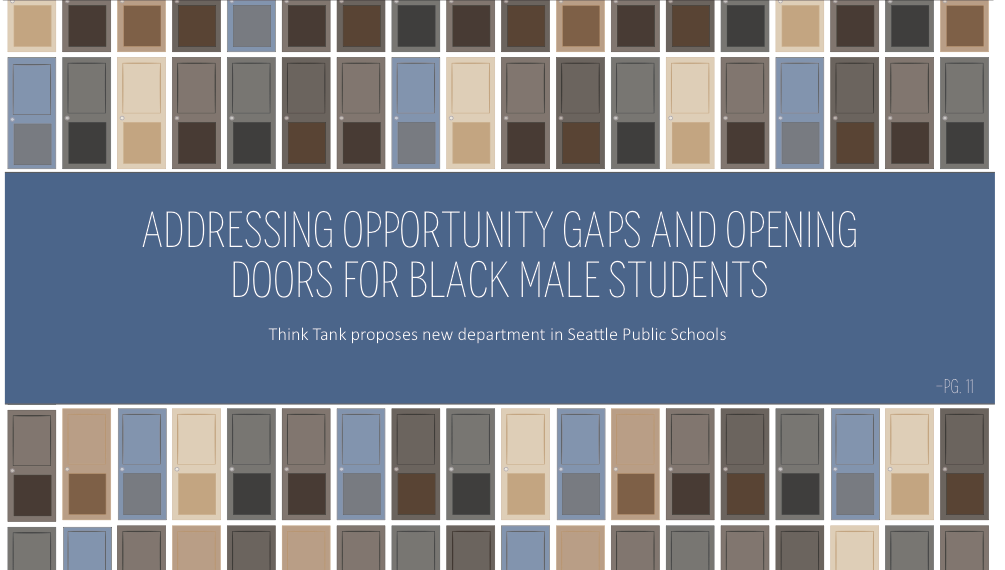 Studies have shown that African American males as a group have the lowest graduation rates. Seattle University’s recent Campus Climate Survey revealed that 728 people said they were affected by exclusionary, intimidating, offensive and/or hostile conduct. 15 percent of the 728 people said they were excluded because of their racial identity. A think tank appointed by Seattle Public Schools recommended the district open an office devoted to the needs to black male students, raising questions of if and how Seattle University could provide the same type of support.

For decades, studies have shown that African American males as a group have the lowest graduation rates and highest expulsion rates in schools across the U.S. More recently, a think tank appointed by Seattle Public Schools recommended the district open an office devoted to the needs of black male students, acknowledging that institutions have failed to provide adequate and equitable support for this historically marginalized group—which raises the question of whether black male students are provided enough support at Seattle University.

“We see from the Campus Climate Survey that students in minority groups feel underrepresented and excluded on campus. That’s not only in their day-to-day life, but also in the classroom,” Student Government of Seattle University Multicultural Representative Stephenie Simmons said.
Of the Campus Climate Survey respondents made up of students, faculty and staff, 728 said that they had been affected by exclusionary, intimidating, offensive and/or hostile conduct—15 percent of whom said it was because of their racial identity.

Dean of the College of Education Deanna Sands said that the opportunity gap is a crisis.

“On so many levels, we continue to fail so many children, predominantly children of color—especially young black men—as well as those who grow up in poverty, and those who grow up learning English as a second language,” Sands said. “The current situation is unacceptable.” 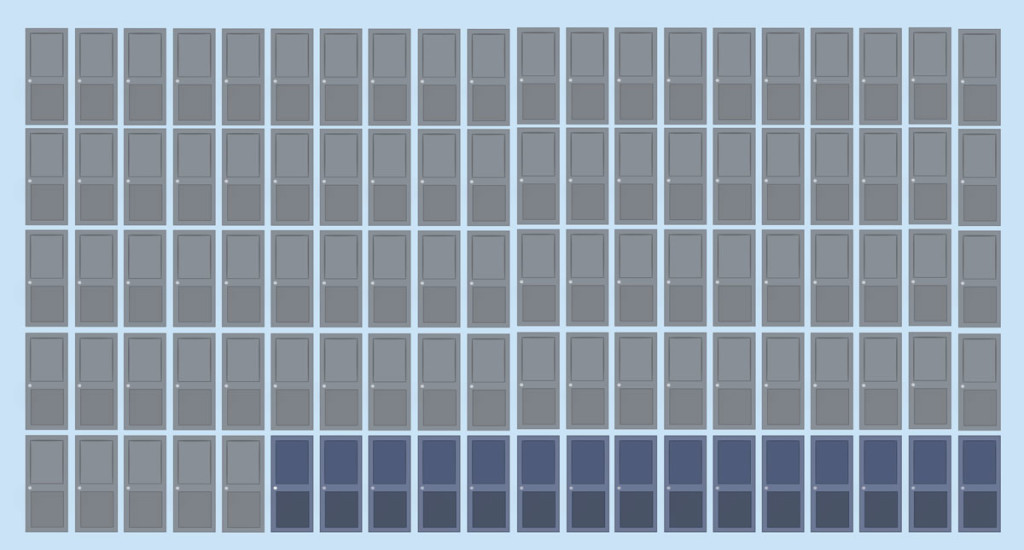 The blue doors represent 15 percent of 728 students, faculty and staff who have experienced exclusion because of their racial identity.

In 2015, Seattle Public Schools adopted an action plan specifically dedicated to “accelerating achievement for African American males and other students of color.” The African American Male Scholars Think Tank also recently issued six recommendations to the school board on specific ways to work on closing the opportunity gap. The list included a proposal for an “African American Male Scholars Achievement Department,” modeled after a similar program in a school district in Oakland. This department, if created, would provide support and mentorship to black male students. By giving extra attention to the lowest-performing group, the Think Tank argued that the entire school population would benefit, an argument that Simmons agrees with.

“By helping black male students, we’re benefitting everyone,” Simmons said. “[Black men are] the ones who are suffering the most, and helping them will be positive, uplifting, and encouraging to everyone.”

Thai-Huy Nguyen, a professor of Student Development Administration in the College of Education, also believes that this would be an important step towards equity in education.

“By providing additional support to a specific group, such as black males, we’re saying that we understand that some student populations—especially those who have been historically, and continue to be, systemically, disadvantaged—need equitable resources to succeed,” Nguyen said.

He added that providing support for marginalized groups is vital at all levels of education, from elementary school to college campuses.

The impact in our neighborhood

Just a few blocks from Seattle U, Bailey Gatzert Elementary is currently addressing the opportunity gap by following the district’s 2015 action plan.

“We’re interpreting it and filtering it so that it’s meaningful for the Gatzert school community,” Principal Greg Imel said. “Starting off, one of the things we’re working on through the Equity Team is finding mentors for African American students.” Imel followed by saying, “more always needs to be done.”

Jesse Hagopian, a teacher at Garfield High School and the adviser for their Black Student Union, believes that if done right, then the department proposed by the African American Male Scholars Think Tank could be very beneficial, but he is not convinced it will solve the problem.

“The worry I have is that it would be just another committee that makes some positive recommendations, but does little direct intervention to help the targeted population,” Hagopian said.

In light of a decision last year to close the Middle College High School in West Seattle, which was one of four branches in Seattle, Hagopian wonders whether these recommendations will come to fruition.

“The talk about initiatives to help students of color is just that—it’s talk. Their actions speak the loudest. Closing Middle College is inexcusable,” Hagopian said. “It’s one of the most important alternative institutions for students who don’t fit into the usual school setting. And it has a social justice curriculum that could energize these students and show them the power of education.”

Spectator stock photo. Garfield High School is one of the school’s that would be affected by the Think Tank’s recommendations.

Another branch of the MCHS is located at Seattle U, on the first floor of the Loyola Building. Charisse Cowan Pitre, a professor in the College of Education and the MCHS Partnership Director, spoke to the unique role MCHS plays in the Seattle Public School system.

“Our students have not been successful in traditional classrooms with large numbers of students, and some have been labeled as failures,” Cowan Pitre said. But at MCHS, they have much smaller class sizes and fewer teachers.

“They’re able to build trust, develop relationships, and garner the support and resources needed to succeed. Students rise to the occasion in a setting where there is a deep belief in their worth and abilities, strong positive relationships, and meaningful learning experiences.”

While the Seattle U MCHS is running smoothly, Hagopian sees the closing of the West Seattle branch, as well as the closing of schools like T.T. Minor Elementary due to budget cuts in 2009, as signs that “it’s business as usual in the Seattle school district.”

“If they’re going to start this kind of department, they should definitely consult with black students and see how it should be done,” Hagopian said. “They would get pretty sophisticated answers from many students who are involved in Black Lives Matter and knowledgeable about equity in education. Somehow consultants and organizations funded by billionaires are always the first ones to speak, while educators and students are left out of the conversation.”

What can we do at Seattle U?

Though the Think Tank recommendation does not apply to Seattle U, Simmons believes the ideas behind it definitely can.

“[Seattle U] should definitely take this as an opportunity to reflect on the ways we support people of color, especially black men,” Simmons said.
Simmons also believes there is insufficient support for faculty members who find themselves acting as mentors for many students of color.

“They may feel burdened because they are helping a lot of students without enough support themselves,” she said. “We also see fewer men of color in academia in general, even at our university. We really need to ask what we are doing to support these students and faculty.”

Simmons invites anyone who has concerns about our school’s support for minority students to meet with her.

“If you feel that your experience is not living to how you imagined, I would love to find a time to meet and talk to you about this,” Simmons said.

Tyrone Brown, Student Development staff member and founder of Moral Mondays at Seattle U, wrote in an email statement to the Spectator that Seattle U can also be involved in closing the opportunity gap in the public school system.

“Seattle University can play a role in advocating and supporting the effort through the Center for Community engagement and its Seattle Youth Initiative, as well as SU’s College of Education and MCHS,” Brown said. “It’s time stop ‘thinking’ about it, and do it starting yesterday.”

The programs Brown mentioned are areas where students can be directly involved with these efforts. Through the Youth Initiative, Seattle U is partners with four local schools: Bailey Gatzert Elementary, Washington Middle School, Garfield High School and MCHS. Some of the programs involve after-school workshops taught by Seattle U students, including a film production class taught by a film studies major and a robotics and computer coding class taught by a mechanical engineering major. About 15 undergrads are also involved in mentorship programs at the partner schools, providing one-to-one support one hour a week.

Sally Haber, the Director of Education Partnerships at the Center for Community Engagement, said that it’s important to recognize that Seattle U strives to create a consistent pipeline of support. In other words, students who participate in the after-school programs taught by Seattle U students in elementary school can continue to be involved with tutoring and mentoring programs in middle school and high school.

According to Haber, Seattle U is also able to provide monetary support through grants that the university receives. For example, from a grant the school received from Target, Seattle U was able to fund a new computer lab at Bailey Gatzert. In another instance, Seattle U funds allowed a school counselor’s position to increase from half-time to full-time. By providing these resources, Seattle U is able to address the opportunity gap in broader ways.

While Seattle U’s efforts can be beneficial to individual students, there are many other schools in the district who are not receiving assistance. Students, educators and even policy-makers appear to favor equity in education for black male students and all students of color. Yet changes are being made very slowly, and mostly on a local level. As Hagopian put it, before real change is possible, “we’re going to need a paradigm shift.”

Madeline can be reached at [email protected]