The Fog of Bias: How Americans Frame Violence 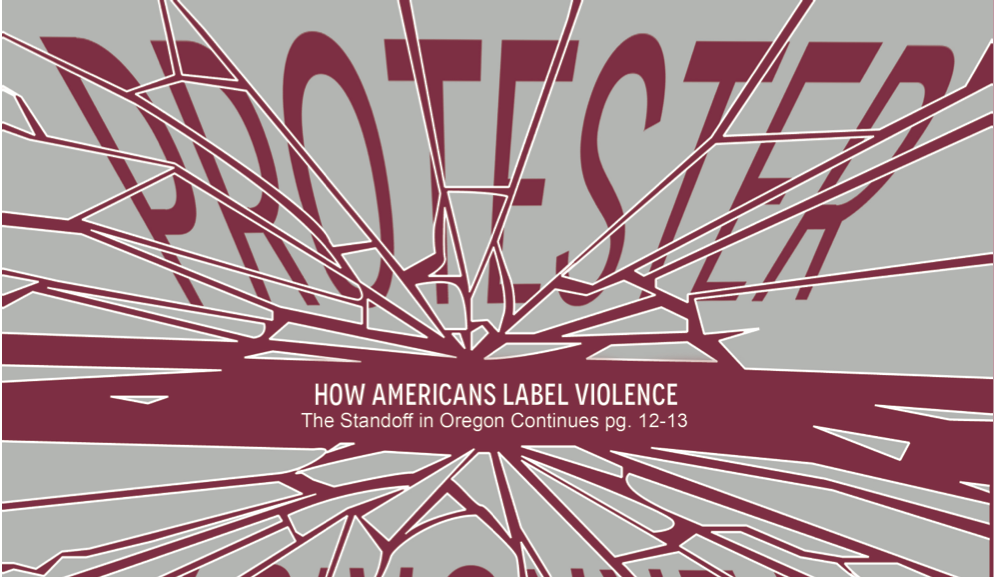 Nick Turner, Author
A man in Oregon and his group of followers, unhappy with land ownership laws, took over a federal building on Jan. 2, vowing to stay there indefinitely. Since then, the occupation has been met with mixed response. Some call the group protesters and farmers fighting for what they believe in. Others see the threat of violence and label it as terrorism.

The words terrorism and protest have radically different connotations, and yet, in light of the federal building takeover last week in Oregon, many have disagreed about which term should be applied to the situation.

In 2015, the prison sentences of two Oregon ranchers convicted of arson were elongated, resulting in outcry among other members of their community. What began as a civil protest less than two weeks ago intensified when Ammon Bundy, 40, whose father drew national attention in a standoff with the federal government in 2014, and a band of farmers carrying guns took control of a building on the Malheur National Wildlife Refuge in Burns, Oregon.

“We will be here as long as it takes,” Bundy told CNN by phone from inside the federal building. “We have no intentions of using force upon anyone, [but] if force is used against us, we would defend ourselves.”

Though no employees were present during the occupation, and no one was harmed, the group calling itself Citizens for Constitutional Freedom has made it clear to police and media that it will use force if needed.

Some are wondering why the group is being referred to as occupiers rather than as terrorists.

Bundy, the spokesman for the group, said the occupation is a protest against federal land ownership. Members of the group believe the land should be redistributed to whom they consider its rightful owners—the American people—so that farmers, miners and loggers can benefit from its natural resources.

“This refuge—it has been destructive to the people of the county and to the people of the area. They are continuing to expand the refuge at the expense of the ranchers and miners,” Bundy told CNN. “This is about taking the correct stand without harming anybody to restore the land and resources to the people so people across the country can begin thriving again.”

These claims were met with heavy opposition.

Opposition came initially from the environmentalists who think the land should be preserved, which is the reason Theodore Roosevelt declared it federal property in 1908.

Opposition then came from the residents of Burns whose lives were interrupted when a group of men marched down the main street of their small town carrying rifles.

“In any group of protesters, there are always people involved who are using the cause in order to engage in whatever type of violent or criminal behavior,” said professor and chair of criminal justice in the College of Arts and Sciences, Jacqueline Helfgott. “There are always people who are going to look at it on TV, get up off their couch and decide that it’s a cause that they want to use as a smokescreen for some sort of antisocial behavior that they have a proclivity to engage in.”

Opposition also came from members of the Burns Paiute Tribe, who regard the land as sacred and can’t overlook the irony present when Bundy says the group is taking back what was stolen from them.

Bundy’s claims are quickly rejected by those who believe the U.S. government is better equipped to maintain land for public use; many of them belong to native tribes, like those from the Paiute Tribe, who have guaranteed access to the wildlife refuge to gather plants to make traditional baskets or seeds to make bread, or to hunt or fish. Tribe leaders say Bundy and his men are not welcome at the sanctuary and must leave.

“The right wing politicians in this country have, for decades now, made a punching bag of the federal government,” Burnstein said. “Laws change because people vote for those changes as opposed to using guns to settle matters.”

Whether or not Bundy and his men have a just cause, their actions have stirred media in all forms. Reporters and journalists casually refer to them as violent protesters, in some cases using the term ‘militia,’ while individuals on social media are quick to condemn their behavior as an
act of terrorism.

“Media has their own definition,” said criminal justice professor William Parkin. “I would call them ideological extremists who are breaking the law.”

According to Piper, the difference between terms is not obvious and could be reflective of the status quo.

“Different groups could describe the same actions with different words depending on their position socially within power structures,” Piper said.
There is no general consensus on the definition of terrorism. As Sami Zeidan, an anchor and reporter for Al Jazeera once said, “Terrorism easily falls prey to change that suits the interests of particular states at particular times.”

Consider how the Taliban and Osama bin Laden were once called freedom fighters (mujahideen) by the CIA when they were resisting the Soviet occupation of Afghanistan. Now they sit at the top of international terrorist lists. The United Nations regards Palestinians as freedom fighters locked in a never-ending fight against the occupation of their land, yet Israel views them as terrorists.

“The repercussion of the current preponderance of the political over the legal value of terrorism is costly,” Zeidan said in an article for the Cornell International Law Journal published in 2003. “Leaving the war against terrorism selective, incomplete and ineffective.”

“The idea of terrorism is to assert power and domination through fear,” Chalit said. “Protest I would define as a reaction against an idea or some sort of action that you personally, or maybe a group, might not agree with.”

Since this situation leans heavily on racial issues, some people believe that the story would be framed in a completely different—but still predictable—way if Bundy and his men were Muslims.

“The use of the word ‘terrorist’ in this cultural climate is reserved for non-white people. I think it makes a lot of sense to apply that word [to Bundy and his followers],” senior sociology and English major Rebecca Clark-Hargreaves said. “That’s a group of people that already have so much social and political power that moving to armed, direct action is almost comical.”

Though this degree of extremism is new, Bundy and his grievances belong to an old issue led primarily by politicians on the far right who strongly oppose federal land ownership.

“[Bundy and his followers] come from an anti-government perspective. They don’t see the federal government as legitimate,” Parkin said. “They would see that what they’re doing is a form of patriotism.”

For decades, members of Congress have voiced their belief that all land should belong to the state. This occupation is a natural byproduct of that conversation.

“The key to the concept of constitutionalism, constitutional government, going back to the Magna Carta and so on, and history, and the idea of democracy,” Burnstein said, “…is that you don’t use weapons to get your way.”

In the meantime, local law enforcement is devising a way to end this standoff peacefully. As Burnstein said, this issue will be solved through diplomacy, not violence.

“Hopefully they’ll see that they’ve made a point, and peacefully vacate the premises.”