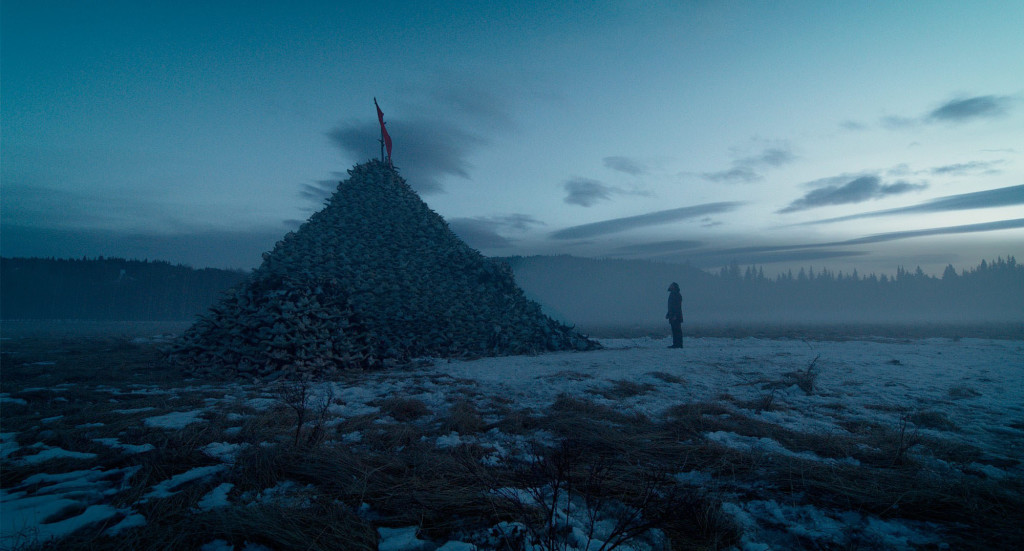 Wow. What a movie.

“The Revenant” is more of an experience than anything else. The film follows a lone man through the vast, desolate coldness of awe-inspiring landscapes, wintry wastelands and rushing rivers across Montana and South Dakota.

At its most basic level, Alejandro González Iñárritu’s “The Revenant” is about survival—man vs. nature—as it builds the environment into its own character that humans encroach on and try to tame. As cruel as it is beautiful, the environment is depicted as being adversarial as any character seen on the big screen in recent memory.

Biting cold, avalanches, frozen rivers and vicious bears are at contention with Hugh Glass, played by an impressive Leonardo DiCaprio, as he trudges through miles of frozen, inhospitable lands in order to seek revenge on the man who murdered his son and left him for dead. There are some thrilling moments, but there is also a lot of crawling, walking and running, which for some might make watching this movie as much of a trek to get through as it is for Glass.

Within minutes of the film’s opening, a truly jaw-dropping spectacle occurs. In what is only a small fraction of this 156-minute work of art, a pulse-pounding, magnificently orchestrated tracking shot ushers the audience through a battle between fur-trappers and Natives. The scene demonstrates Iñárritu’s incredible direction (proven in 2015’s “Birdman”) and Emmanuel Lubezki’s genius cinematography. It is two masters at work, and they given the audience an unforgettable experience that begs to be seen on the big screen.

There were about five times throughout the course of the movie where I caught myself actually holding my breath. While it can be overwhelming to the senses at first, Iñárritu does his best to not complicate things with voice-overs, narration, or much dialogue at all for that matter. A few instances of subtitled narration go by almost unnoticed as the audience is constantly drawn to the majesty of the environment.

Iñárritu’s vision of the American wilderness is both grim and grand. It is a vision that is not easy to digest, even though it boasts immaculate cinematography (all done with natural light) and some of the most gorgeous imagery ever seen on film. Dismemberment, arrows through the neck, castration, scalping andrape fill the movie with pain and suffering, all the more accentuated by Glass’ struggle through the unforgiving lands. Brief moments of reprieve appear funny—not only because they are funny, but because they allow the audience a break from the intensity of the suffering Glass faces throughout the film.

As most—if not all—of the reviews will say, DiCaprio gives the film his all. From actually eating raw bison liver, to crawling through snowy forests, to brutal fights, he gives this role everything he’s got. It’s no surprise that he claims this is his most taxing performance ever. Many people forget that acting is more than just reciting lines from a script. There is never insight into DiCaprio’s head, but his performance makes it clear to the audience what he is thinking of—survival and revenge.

While his presence alone carries the audience through most of the film, the man Glass is tracking also presents, in some ways, a more interesting character. Don’t get me wrong, Leo’s performance is deserving of all of the recognition it is getting, but Tom Hardy’s performance as John Fitzgerald, the film’s antagonist, is also magnificent and one that has been completely overshadowed in order to market the film as “Leo’s greatest.”

From the onset, his actions are almost understandable. Like Glass, he is struggling for survival and will do anything to get out of the unrelenting wild. Even though we know he wants to leave Glass behind after his horribly gruesome bear attack, he goes as far as to stay behind and watch over him (albeit for a nominal fee), but his survival instinct gets in the way. Hardy imbues Fitzgerald with the same sort of malice that has become his signature in Hollywood, but then sends him down a self destructive spiral that shows the primal workings present in all animals trying to survive in nature.

The savage beauty of “The Revenant” lingers on even after the credits roll. While humans may populate the film, they are really just animals. Primal instincts take over as the audience is ushered through one being’s quest to get the vengeance he believes he deserves. It is not an easy pill to swallow and it will test the limits of most audience members; however, if given time and patience, “The Revenant”—with its breathtaking visuals, stunning performances and bestial themes—is a film that rewards in spades. It is a masterpiece.