Too Little, Too Late? Seattle Declares State of Emergency Over Homelessness 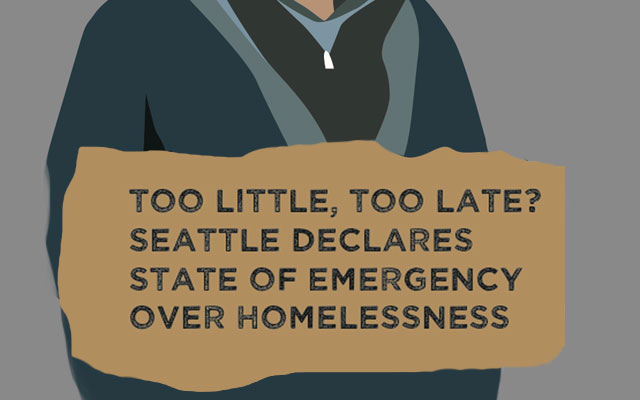 Seattle Mayor Ed Murray said that the city will make a one time allocation of $5.3 million towards alleviating homelessness, after declaring a state of emergency regarding the issue–but will this be enough to resolve a problem deeply entrenched in other social, economic, and political injustices?

Members of the Seattle University community are skeptical of Washington State’s recent actions and point to a need for more non-punitive measures.

Homelessness was declared a state of emergency last week, but it is by no means a new problem for Seattle.

Since September, 66 homeless people have died in King County, along with 47 people in the streets of Seattle. Almost 3,000 children in the Seattle Public Schools identify as homeless, and the number of men, women and children without shelter has increased by 21 percent since last year.

Right in the middle of the International District, 54-year-old Daryl Barnes has been homeless for about eight months. His wife left him when he lost his job six years ago, and as rent payments continuously backed up, he had no choice but to take to the streets.

“My wife tried to pretend our money problems didn’t exist, and then she tried the same with me,” Barnes said. “Now I get to live on the streets with city officials pretending I don’t exist too.”

Recognizing the gravity of the problem, Seattle Mayor Ed Murray and King County Executive Dow Constantine declared a state of emergency regarding homelessness on Nov. 2.

According to Murray, the city will allocate $5.3 million to aid in relieving the problem, while Constantine has proposed an additional $2 million in funds. The city and county already provide more than $40 million and $36 million, respectively, on services related to homelessness.

The money will be used to provide about 150 new shelter beds, as well as prevention and outreach programs and housing vouchers for individuals being released from drug court. In addition to Seattle, cities such as Portland and Los Angeles have also declared states of emergency regarding homelessness, pledging $30 million and $100 million, respectively, to alleviate the issue.

Any action taken in addressing this issue is better than none at all, but a number of advocates are looking at this recent decision with skepticism. Sara Rankin, the Director of the Homeless Rights Advocacy Project at Seattle University’s School of Law, wonders whether it will make any significant difference.

“That very small amount of money [we pledged] is going to be pulled in a lot of different directions,” Rankin said. “Of course about 100 new shelter beds are wonderful. But the most recent number of homeless people in King County is somewhere around 3,772 people.”

Although the end goal may be to eliminate the plight of the countless people suffering from homelessness, there are still numerous systems that perpetuate cycles of poverty and disparity.

The City Council in Everett, Washington recently passed an ordinance that deems aggressive panhandling a misdemeanor punishable by law. The University District in Seattle is also seeking to purge crime and drug dealing from their neighborhoods in the launch of the ‘U Way Project,’ a partnership between the University of Washington and Seattle Police Department.

While both efforts seek to make high-traffic areas safer for residents, students and businesses, they also contribute to the increasing criminalization of homeless people.

Based on studies done in the state of Washington, the greater the income disparity gap in any particular area, the more punitive that space will then become for low-income people. The number of criminalization laws and enforcement in that area grow in areas with greater income disparity gaps. Increased gentrification only adds to the problem.

“Residents and business owners generally don’t like to be reminded of visible poverty, so they put pressure on city officials to get rid of it and remove visible evidence of human suffering,” Rankin said.

Nationally, the impulse seems to be the pursuit of quick fixes rather than investments in non-punitive alternatives to addressing this visible poverty. Appealing to affordable housing is a constant battle that cities like Seattle face.

According to Rankin, every $100 increase in monthly rent results in a significant increase in the number of people experiencing homelessness.

“It doesn’t take a sociological study to prove what seems, to me at least, to be common sense,” Rankin said. “There is a clear relationship between the cost of housing and the lack of affordable housing in homelessness.”

Seattle receives significantly less funding for affordable housing presently than it did in previous years, although it has passed legislation allotting for three new encampments on city land.
The School of Theology and Ministry’s Program Manager, Lisa Gustaveson and Program Coordinator, Hannah Hunthausen are still working on their project, which is focused on helping faith communities find their voice around policy and advocacy surrounding homelessness. By connecting congregations to their rapid re-housing resource, they’re quickly working on getting families the support they need to stay in their housing.

“We’re sort of that bridge,” Hunthausen said. “We connect the churches and the faith community with the system.”

Gustaveson and Hunthausen, after working on this project for several years, know very well that there is no simple way of approaching this problem. The root of it is buried in a multitude of factors, such as economic injustice, health-related expenses and bankruptcy.

“For me it can’t be either or,” Gustaveson said. “We have got to be addressing all of these things at the same time. You have to be doing emergency shelter and helping people with their basic needs, then you also have to be looking at affordable housing.”

Much of their advocacy work involves sharing with the community updates on their project, and making the issue more personal beyond data and statistics. Their poverty immersion workshops have been going on since April 2013, done generally in congregation.

Their outreach work has been with faith communities like the Muslim Association of Puget Sound, as well as other churches around the area like Puyallup and Bellingham.

For professor Wilson Edward Reed, teaching students about the divides that poverty, race, and social class create for marginalized people is a crucial step in raising awareness that will lead to action. Assistant professor in the Matteo Ricci College and on the board of directors for Operation Nightwatch, Reed believes that everyone should get involved in this conversation.

“My concern is that people must have a good understanding of the society we live in,” Reed said. “The whole core of what I’m doing is education. I see myself as an instrument for change.”

According to Paul DeWater, Vice President of University Affairs for Student Government of Seattle University, we as a student body must be committed to doing our part in ending this pervasive and chronic issue.

SGSU is bringing Mayor Ed Murray to campus to speak on Dec. 2. Their hope is to spark a larger conversation and dialogue with students about homelessness and to help identify the reality of homelessness.

“The fact that we are an institution that has prided itself on social justice and to exist literally right next to [the problem of homelessness] is extremely problematic,” DeWater said. “We have to do more.”

Research has begun in seeing what other programs and initiatives other institutions are currently employing to support students who have food or housing insecurity. A possible partnership may be brewing between SGSU and students at the University of Washington in an effort to unite on this issue.

“We’re identifying service projects that we can do, thinking of different ways that we can better engage with the homeless population of Seattle,” DeWater said.

Although it may seem like there are endless ways to approach the situation, perhaps we as students can start at the heart of the matter by connecting with the fragile humanity found in all of us.

Similarly to Barnes, 23-year-old Jameson Mills struggles with homelessness. After leaving his alcoholic father when he was 19, he doesn’t think that life has changed too much apart from the weather being “always so damn cold.”

“I wouldn’t say that was my home when I was with my Pa,” Mills said. “Ain’t no different now. I’m still hungry and got no home. These kids walk by like they know what I’m all about but I still got dreams too. Just can’t do nothing about them right now.”

To abide by our dedication to pursuing social justice, we as a university now have the opportunity to make this commitment more than just words, and to take an active stance in changing the effect homelessness has on those suffering.

“From being a job into being a mission, what changed it for me was when I got to know people on the streets and got to hear their stories,” Gustaveson said. “I think that’s the most important things that students can do, is to really hear those stories. There’s a lot of different ways to do that.”